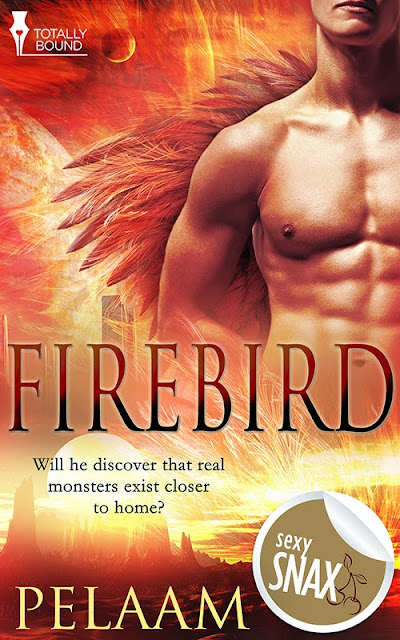 Cassian is the bait when his Monarch wants to trap a Firebird. Are Firebirds beasts, or will Cassian discover that real monsters exist closer to home?Palace scribe Cassian is stunned when he’s called before his ruler, Great Monarch Maurus, to be the bait for trapping a Firebird—a dangerous predator and a beast of legend that lives high in the mountains of his country’s border. As he climbs a mountain, Cassian is injured, but a Firebird rescues him. Cassian discovers that Firebirds are not animals. Instead, he uncovers Arturri, an intelligent being from another world, living as a castaway. But Cassian is helpless to prevent Arturri’s capture by Maurus’ dangerous and evil head of security, Phrixus.When the secret beneath the palace is revealed, Maurus is more monstrous than even Cassian ever imagined. Who can Cassian trust? Can he save not only Arturri, but also the other prisoners of Maurus?Reader Advisory: This book contains a scene of attempted rape and sexual abuse.Publisher's Note: This book was previously published elsewhere. It has been revised and re-edited for release with Totally Bound.

Reviewed by: fadia
My Rating: 4 of 5 Stars

The cruelties of human nature never ceases to amaze me. What is it about some of us that we must destroy, eradicate, enslave and humiliate those that are different or we feel are weaker than us. Firebird known as Aturri touched something in me, this majestic being from another place that literally came to the land of man along with his family who by the way are scientist for the sake of science. When their ship is incapacitated and they needed to survive they were pretty much hunted maimed, experimented on all for on monarch twisted perverse fascination.

Arturri is the last of his family which the monarch must have in order to prove his prowess. What he did not count on was his bait Cassian and Arturri falling in love. Together with the aid of others the bonds of oppression are broken. New a familiar bonds are created.

Guest Post
Firebird with Totally Bound is both reworked and re-edited from its first time release. Although there are some changes to the story the characters are the same.
I often get asked about writing. What am I like as a writer? Where do I get my inspiration? How and where do I write? Where do I get my ideas from? I thought I'd take this opportunity to let readers get to know me a little better.
Although written as science fiction, the inspiration for Firebird was from a single sentence in a fairy tale. In that tale a hunter picked up the feather of a firebird. When I read that, I immediately got an image of Cassian looking at the feather, but that the feather came from another being, not a beast.
For me, inspiration can come in many forms. In this instance, a single sentence created two worlds and Firebirds. I’ve being inspired by images, song lyrics, fairy tales, folk tales, and legends.
How and where do I write? I like to write with a DVD playing in the background. I don't like silence. I select an old movie and it will be one that I’ve watched many times before. That enables me to look up and know exactly where I am in the movie without needing to take too much attention away from what I’m writing. I also like to have a cup of tea at my side and occasionally a glass of wine.
I don't have a desk or a formal writing space. I'll write sprawled on the couch, stretched out at the beach, or sitting out on the balcony. Even when on holiday, my laptop comes along for the ride and I write.
How much plotting do I do? Generally speaking, very little. Occasionally I may try and work out how many chapters there should be with an approximate word count, and what I think the chapter should include. But this is rare. I’m much more likely to start with whatever gave me the inspiration in the first place. So with Firebird I had Cassian holding the feather. From there I expanded to who Cassian was, where he was, and where the feather came from. That in turn led to Arturri and his world.
Do I sit and write a story logically from beginning to end? Almost never. Sometimes I start in the middle, or towards the end. Most often I jump back and forth writing specific scenes and will then work my way through when nearing completion to ensure the story flows along logically and nothing has been missed.
Excerpt from Firebird:
“You may look upon me. You and I will be spending time in one another’s company and I wish to look at your face.”
“Thank you, my king.” Maurus’ words were like the sounding of an ominous bell. Scribes did not keep company with the monarch and he began to wonder if he had inadvertently drawn attention to himself in some way.
“I believe you have camped many times within the permitted zones of my forest and mountains.”
“Yes, Great Monarch, but only where permitted, I assure you.” The thought that he might have committed an indiscretion or broken a rule hadn’t occurred to Cassian. He knew he had always camped carefully.
“It’s quite all right, little one. There is nothing to worry about in that respect. I just need someone accomplished in camping and climbing to undertake a little chore for me. Look at this,” Maurus commanded.
The seated man offered Cassian a feather. Hesitantly, he approached and took it, turning it in his hand. It was like no feather he had ever seen—long, strong and iridescent, red, orange and gold.
“It’s beautiful.” Cassian couldn’t stop the words slipping free.
But Maurus just smiled at him. “Indeed it is. It belongs to a Firebird.”
Glancing at Maurus from beneath his lashes, Cassian bit his lip. He hadn’t intended to speak aloud and he had never heard of any such bird. He felt sure that Maurus was watching to see his reaction. But apart from the feather’s strange beauty, there was little else Cassian could say about it.
“You will be instrumental in my catching a Firebird. They exist high in the mountains and I need a certain lure,” Maurus said.
“I know nothing about hunting or trapping, Great Monarch,” Cassian said, furrowing his brow.
“You have no need. You are the lure.”


Enter Totally Bound’s May blog tour competition for the chance to win an eBook of your choice! Not including boxsets or anthologies. 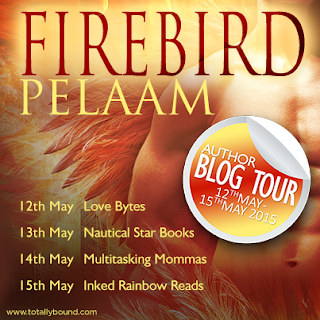 Living in clean, green New Zealand, Pelaam is a multi-published author of gay romance and erotica.
When not working at writing, Pelaam likes to indulge in her other passions of cookery and wine appreciation.