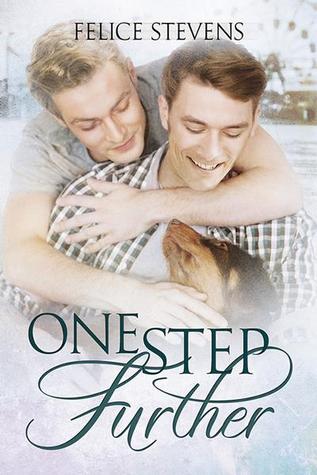 Alex Stern has it all; good looks, charm, a job he loves and everyone calls him a friend. He lives life to the fullest at a breakneck pace, in the city that never sleeps. But Alex is also a master pretender; not even his best friend sees the pain that Alex hides so well. Alex himself isn’t sure who he is or what he’s searching for, he only knows that he hasn’t found it yet.
As a veterinarian, Rafe Hazelton loves each animal that crosses his path; they don’t care if he stutters a bit or that prefers men. Their love is unconditional, but his life is still empty; they can only give him so much. New friendships convince him it’s time to break the wall of loneliness he’s hidden behind since childhood and discover what he's been missing.
Alex and Rafe forge a friendship that turns physical, and they both swear that the relationship will last only as long as the fun does. But when old heartaches come to light and secrets hidden for years are revealed, Alex and Rafe discover if they accept what’s in their hearts and take it one step further, the greatest reward is waiting for them in the end.

Through his years of practice and experience, Rafe had learned to help and comfort, to step in when his expertise was needed, and step away when there was no hope left at all. What Alex didn’t know was that Rafe always held out hope for life, and though he might give the appearance of a man ruled by quiet and calm, in truth he was tenacious as a bulldog and refused to accept defeat.

So Rafe allowed Alex to sit in his moody silence until their beers came and they both took long, bracing swallows.

Alex shrugged. “Suit yourself.” That offhand comment led Rafe to believe Alex didn’t expect much from people or life in general. Perhaps he too had been disappointed by the people who should have always been there for him and weren’t.

“All my life I’ve been told I was different and that kids wouldn’t like me because of my stutter. When I realized I was gay, I knew my struggle only increased ten-fold. It made me retreat even more.”

Alex traced the lip of his beer bottle with his finger. “Yeah. I can understand that to an extent.”

“That’s my point. You can understand it to an extent, but not really. I’m not saying this in a spiteful way.” It was so important to Rafe to make Alex understand where he was coming from. “You’re a big, good-looking man with a great personality. Everywhere you go, you make friends so easily; people gravitate to you naturally. It’s a gift, if you think about it.”

“I have many gifts,” said Alex with a wink and smiled for the first time since they sat down. Rafe wasn’t fooled.

“You’re deflecting,” he stated, and like Rafe knew he would, Alex stopped smiling, his mouth thinning to a tight line. “Don’t get angry with me.”

“I’m not. I’m only wondering when you decided to appoint yourself as my therapist.”

Rafe pinned Alex with a stare and a raised brow. “When someone sticks their tongue down my throat, it’s a signal to me that maybe we’ve gone beyond a handshake and a ‘Hi, how are you.’”

Alex stared at him for a moment, then his eyes creased with amusement and he started to laugh. He didn’t stop, even when the waiter arrived with their food.

Rafe folded his arms and glared. “I’m not finished. You make friends easily but it’s all on the surface, isn’t it? I bet people don’t ever really get to know the real you, do they?”

Once again, Alex stopped laughing, only this time it seemed he’d had enough. “I don’t have to listen to this shit.” He looked around for the waiter. “I’ll get my food to go.”

“That’s what you always do, don’t you. Instead of talking about things, you make a joke or run away. It’s easier to run away.”

“I know what it’s like. My reason is obvious. I spent almost my whole life hiding behind a wall of silence. But what reason do you have to play the class clown all the time? People would like you no matter what.”

For a moment Alex stared at him, then smiled a real smile, the first all night. It kindled a glow in his deep blue eyes.

“Do you realize something?” He leaned forward and Rafe swore he could feel the warmth radiating from Alex’s body across the table.

Caught up in the moment, Rafe couldn’t look away. The sounds of the pub faded in the background, including the music, which unfortunately had gone from ’80s retro to modern day rap. “Wha-what?” His mouth tasted dry even with the beer he’d drunk.

“You barely stuttered, not at all until now.”

Alex’s large warm palm slid over his own hand and gave it a squeeze. “That’s great isn’t it? You must be getting more comfortable with me.” A wide grin broke across his face. “Guess that tongue down the throat action worked for something.”


Review by: multitaskingmomma
My Rating:4 of 5 Stars

When I first read the blurb, my first thoughts were of dogs, cats and a shy veterinarian. Yes, I knew there was going to be romance in this one, but I thought the pet cuteness would be running this show. 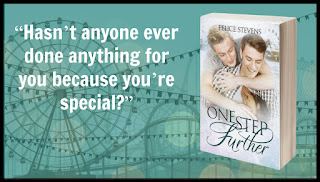 It did not. Which is surprising. Instead, I got a story about two broken men, one acting fun and games, the other hiding behind a busy clinic schedule. Two men whom people assumed were either more or less than who they actually were. Not even their best friends really knew who these men were. There lies a story that is full of secrets and personal angst. When they meet, they connected and they kept each others' secrets. They became the best friends no one thought, not even they thought, they could ever have.

Alex is a nurse and loved being one. His past is something painful for him to remember. The loss of his family drove him to be the class clown, the one who made people laugh and smile. He is a charmer, he is a playboy. No one got through the facade he built. Not until Rafe.

Rafe is the vet, he loves his career not much because he loves his line of work but really because he knew he could trust his patients to never condemn him or crucify him, for his being different. People look at Rafe and see a careful, deep thinking, boring man beneath the attractive physique. His careful manners and speech effects made people uncomfortable and soon turned their backs on him. When he meets Alex, he forgets his insecurities and his real persona surfaces, surprising not only Alex, but himself and eventually the rest of those who knew them.

For an anxiety filled plot, this should have made me cringe or fast forward. Fortunately, this is a very fast read, quite light in my honest opinion, and the romance built slowly just as the characters showed who they really were to each other slowly and very surely.This is not an insta-love story, instead it simmers and beguiles. Egging the readers on to discover what secrets both men kept.

A very enjoyable read and the Lucky puppy dog was the icing on the cake. 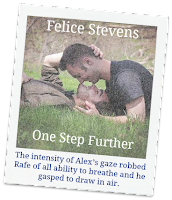 I have always been a romantic at heart. I believe that while life is tough, there is always a happy ending just around the corner. I started reading traditional historical romances when I was a teenager, then life and law school got in the way. It wasn’t until I picked up a copy of Bertrice Small and became swept away to Queen Elizabeth’s court that my interest in romance novels became renewed.


But somewhere along the way, my tastes shifted. While I still enjoys a juicy Historical romance, I began experimenting with newer, more cutting edge genres and discovered the world of Male/Male romance. Once I picked up her first, I became so enamored of the authors, the character-driven stories and the overwhelming emotion of the books, I knew I wanted to write my own.


I live in New York City with my husband and two children and hopefully soon a cat of my own. My day begins with a lot of caffeine and ends with a glass or two of red wine. I practice law but daydream of a time when I can sit by a beach somewhere and write beautiful stories of men falling in love. Although there is bound to be angst along the way, a Happily Ever After is always guaranteed.

Posted by multitaskingmomma at 4:42 AM