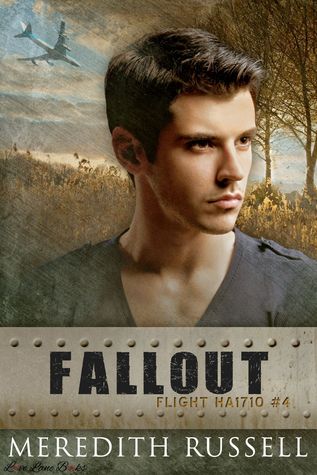 Can missing a fatal flight be the wake up call Harrison needs?
When Harrison Kelley is banned from getting on Flight HA1710, it seems to be the perfect ending to a crappy couple of days. Not only did he wreck a wedding, but he’s drunk way too much and been on the receiving end of the groom’s brother’s fists. Being escorted out of the airport by security was just the icing on the wedding cake.
Elijah Pettifer has lusted after Harrison from afar for years but Harrison never sees him as anything more than a friend. If he ever saw him at all. While attempting to defend what little honor Harrison has left, Elijah gets caught up in the wave of chaos surrounding his teenage crush. But missing his flight home because of Harrison’s mess might just be the luckiest thing to ever happen to him.
With a 24 hour ban imposed by the airport, and having only each other for company, the two men grow closer. But will the fate of the airplane they should have been on be the push Harrison needs to walk away from the toxic relationship of his past? And can Elijah make Harrison see exactly what he’s been missing out on because of it?

Oooh, surprisingly, Elijah and Harrison turned out to be my favortie couple, so far, out of this Flight HA1710 series. The series revolves around the crash of the plane and as I mentioned before, those who were in it or not on said plane, their lives were inadvertently changed for the better or worse.

Harrison had been in a destructive relationship. It was a relationship based solely on habbit and like any addiction, it was difficult for him to break it off. Yes, he tried but just like a smoker or a junkie, he turned from his addiction with one step back and returned to it full throttle. Not a good thing to do, especially when he went all out, it was at a wedding. I won't spill the details, just know, he met face with fist and got hauled off out.

To make matters even worse than they already were, Harrison's life takes a nosedive. It results to his getting banned from an airport and missing his flight. Was this an unfortunate event knowing said plane crashes? I think it was fortunate for when the waste hits the AC somewhere there has to be an open window to let out the bad smell right?

This is where Elijah comes in. He is a dog lover and friend to Harrison. He goes out of his way, I would say went through all the lenghts, to help out his friend. In the process, they find themselves in each others' company. That is a good thing, for this is the part when Harrison begins to realize what he had been missing out all along.

I cannot spill the details, this is still pending release, but I can reveal that both men get to have the happiness they deserve. Harrison also gets to realize who he is and see what he could become. Elijah finally gets the chance he'd missed out on and will get his chance to claim his man. The road to their discovery of what was clearly in front of them, is the icing on this cakish book.

Sweet, rough, stupid, romantic. These are the words the come to mind when thinking Elijah and Harrison. Thing is, I realize I want more of them so want more of their story in the future. That need to know more is what makes them my fave couple so far....

Posted by multitaskingmomma at 8:27 AM