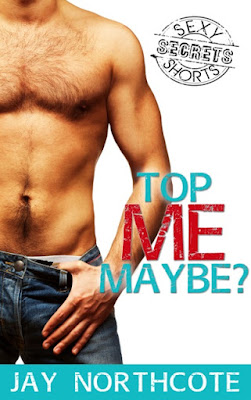 Duncan has a secret fantasy, but is Tyler the right man for the job?
Tyler’s new policeman boyfriend, Duncan, is gorgeous. Tall, broad, and über-masculine, he’s the epitome of the dominant top—in appearance at least.
When they discuss their sexual fantasies, Duncan confesses to a secret desire that surprises Tyler. Luckily for Duncan, Tyler’s happy to oblige and is determined to give Duncan a night to remember.

The Secrets Collection are sexy short stories by four different authors. The stories are linked by the common theme of secrets.

Review by: multitaskingmomma
My Rating: 3.5 of 4 Stars
(Based on Short & Light Read Category)

Top Me Maybe? is a funny story. Not hilarious, just funny. It is this type of story that makes you think twice, ask a question and get an unexpected answer. Ever seen two men and immediately your mind goes on hyperdrive and imagine who is top, who is bottom or are they flexible? Well, this is it.

We have Tyler, a typical twink you may say, except he is not. He has been going out with this cop whose very presence could make you think toughness, violence, dominance, mastery and strength. Of course when they met, it was immediately assumed that Tyler, as the smaller man, would naturally be the bottom. They are a great couple, just getting to know each other and it was in one of their date nights they talked about their sexual fantasies. Duncan's fantsy surprised yet delighted Tyler for who knew that all along, Duncan needed something no one would ever dream of assuming?

This is a short story and the romance is just building up. It is one of those defining moments in a couple's relationship where they discover something about the other that can make or break them. In this case, it is the beginning of a beautiful love affair.

“What do you want to talk about?”
Tyler thought for a moment then answered, “Sexual fantasies.” They hadn’t had that conversation yet. Not in any detail anyway.
“Okay.” Duncan sounded a little dubious. “You can go first then. Seeing as it’s your idea.”
“God. I have loads… where to start? Okay, one of mine is deflowering a Catholic priest or a monk or something—someone who’s taken a vow of celibacy, but in the fantasy I’m so hot they can’t resist me.” Tyler’s cheeks heated at the admission, but somehow it was easier having this conversation in the dark when Duncan couldn’t see his face. “Another is having sex in public…. Not in the park or something—that would be a bit skeevy—but somewhere people have come expecting to see it, like a live sex show. Or maybe being in porn, knowing that people were watching me and jerking off watching me fucking someone else…. That would be hot.” He stopped because Duncan hadn’t reacted. “Well? It’s your turn now.”
“I feel really boring in comparison,” Duncan said. “Your imagination is wild.”
Tyler chuckled. “Yeah… well I was a late starter in the practical side of things. Didn’t even kiss a guy till I was seventeen, so I spent a lot of time wanking in my bedroom thinking about stuff like that. Anyway, come on. There must be something you fantasise about. It doesn’t have to be something you actually want to do for real. I don’t think I’ll ever actually shag a priest or make a porno, but it’s fun thinking about it. It turns me on.” He wriggled a little closer to Duncan, pressing his thickening cock against the curve of his arse and combing his fingers through the hair on Duncan’s chest.
He waited for Duncan to respond, and the silence stretched out long enough to get a little awkward.
“Hey, you don’t have to if you’re not comfortable sharing,” Tyler said. Suddenly he was worried. Maybe Duncan was into something really kinky? Maybe Tyler didn’t want to know what his fantasies were. “Don’t worry about it, we can—”
“I think about being fucked.” Duncan’s voice was quiet, a deep rumble that vibrated in his chest under Tyler’s hand.
Surprise hit Tyler at the admission. It wasn’t what he’d expected to hear from Duncan at all. But he didn’t react, waiting for him to elaborate. But he didn’t, so Tyler prompted, “And?”
“That’s it.” Duncan took a deep breath, his ribs expanding under Tyler’s arm. “I’ve never bottomed. But I… I fantasise about it. About being fucked by another guy.”

Jay lives just outside Bristol in the West of England, with her husband, two children, and two cats. She comes from a family of writers, but she always used to believe that the gene for fiction writing had passed her by. She spent years only ever writing emails, articles, or website content. One day, she decided to try and write a short story–just to see if she could–and found it rather addictive. She hasn’t stopped writing since.

To get a chance to win an ebook copy of Top Me Maybe?, leave a comment below and don't forget to leave your contact email address.

We will randomly pick 1 lucky commentator and Jay Northcote will email them their ebook title and version of choice from a backlist title.

Posted by multitaskingmomma at 5:10 AM