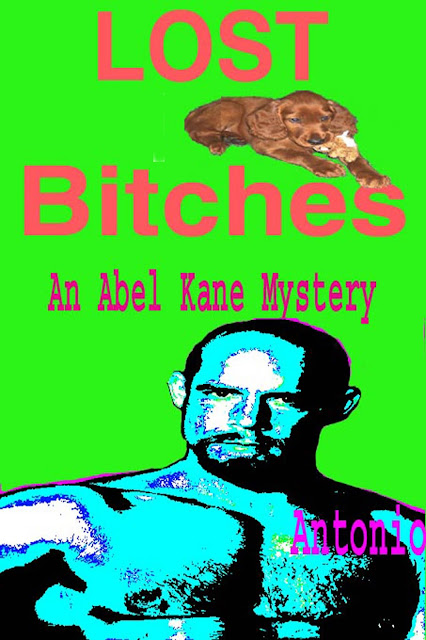 Private detective Abel Kane is on the case. And he is willing and able to do what it takes to get the job done. What starts off as a seemingly simple dognapping case turns into much more when the mob, a pretty female call girl, and several hunky men get involved.

Antonio has a new book out and a new character to introduce to his readers. We meet Abel Kane (pun intended!), a private detective with a past that is as insteresting, intriguing and scary as anyone could ever have. Raised by two gay uncles, he and his sister had a parental guidance no one would wish on their worst enemies. But that is in the past and what we have is a man twisted in his sense of belongingness but the sharp eye and mind that makes him a successful detective.

This is a mystery involving the loss of a bitch, a prize winning Irish Setter. In the process of finding her, Abel meets a few good men and women who either help him out or make his life a living hell. In the meantime, he has his best bud Trevor Figg to keep him company.

I would place Lost Bitches under a not-so-cozy mystery. The case is simple enough but it is the complicated relationship between the case and the detective that drives this. Abel is an very interesting read, he is definitely not the stereotypical main character we expect. In fact, there are some facets to his character I cannot connect with. He is uber male and yet he can be very loving and supportive.

What made me continue to read on is the writing style of Antonio. Again. Yes, I know, I am a sucker for his style that just weaves these images in my head. He can be very descriptive and eloquent at that, making the scenes pop out and the emotions jump out. As for Abel? I think he is the more mysterious out of all of Antonio's fictional characters. He is not easy to love and yet he is impossible to ignore. Especially when his sense of twisted logic comes to play.

Another book out, another series discovered. Another length of time anticipating what happens next with Abel. I am wishing some things to see in the next book but right now? I don't know. Antonio is mysterious where he is taking us on this Abel Kane journey.

Posted by multitaskingmomma at 6:10 AM