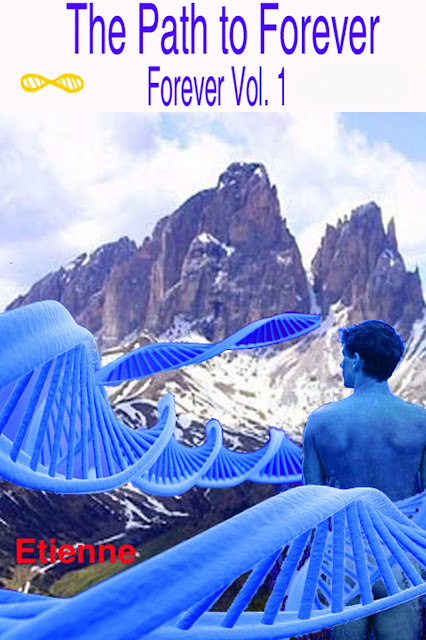 Could you handle living forever, knowing you would watch your friends grow old and die?
These are questions newly minted Doctor Marco Sartori d’Argenzio must face when he and his partner Danilo Rosati celebrate Marco’s completed residency and Danilo’s most recent PhD with a vacation at Marco’s father’s home in the Duchy of Aragoni. There Marco learns about his family’s legacy: his father is more than two thousand years old, and he can expect to live just as long.
Marco inherits his uncle’s title amidst adventure and danger, but it breaks his heart to realize that he’ll live only to see the man he’s loved for a decade grow old and die. However, there is hope: Danilo is studying the unique DNA of Marco’s family in hops of discovering the secret—because Danilo has no intention of leaving Marco alone for what could be forever.

I read The Path To Forever... some years ago. It was actually one of the very first I read, other than the other Etienne stories I had read then. Path is an offshoot to the Avondale Stories, though I think it is the other way around? Anyway, those of you who are familiar with Etienne's works should be familiar with the characters of Marco and Dani who pop up once in a while in those stories. This Revised Edition has a few changes, but not from the story itself. In short, it is still the same Path but refined in some ways. You will find that out at the very first pages how it was refined.

For those of you who have not read Path, Marco and Dani are an established couple who had just finished getting their degrees in Medicine and two PhDs. Just as they were planning on a vacation to Marco's home, the Duchy of Aragoni which his father rules, they are met with a death and a mystery. This spurs the story on how Marco discovers his family line is not as ordinary as it looks and goes further into the annals of history than previously thought.

This introduces the science fiction/mystery series trilogy which eventually leads to Dani's discovery that seals his fate and life as Marco's forever partner. In the process of finding the answers, they uncover more mysteries they only hope to answer. They also find a family that is just like the rest of us but are very different in more ways than could ever be imagined.