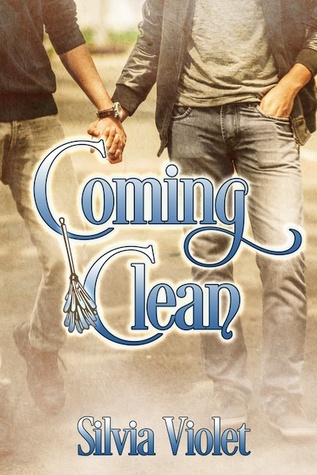 
An unexpected inheritance lands Jeremy a large house and plenty of money to take a sabbatical from his job teaching poetry at a small college. He intends to sell the house and take off on a new path to discover what he wants out of life. Then he meets Connor. The attraction he feels to a man so different from himself is no less shocking than his change in financial circumstances, but Connor is in the closet and Jeremy wants a life lived out in the sun.
Connor is a former Force Recon Marine who runs a housecleaning business. When he’s hired to get Jeremy’s house market-ready, he’s startled by how attracted he is to his client despite their many differences. But his past, especially his final mission, weighs heavily on him. He’s not certain he can be the man Jeremy needs, but no man has ever made him want to take a risk like Jeremy does.

Coming Clean destroyed my idea of what a housecleaner should look like. We are so used to the image of middle aged women with a broom in one hand and a duster on the other, their hair wrapped in a bandana and sweating it out to get a house clean. Of course that image was destroyed by one beautiful actress who is a house cleaner but ends up as the Queen of the Galaxy. With Connor, our imaginations run amok. Who could resist a former Force Recon Marine with a broom in one hand, a duster on the other, and abs that go on forever? I mean, seriously? Are you willing to let go of that image? I sure am not, and my fantasy may run wild but who cares? I just loved how Connor took life at face value and made something out of nothing.

As for Jeremy, well, his circumstance couldn't have been luckier for inheriting such monies and property. His problem was that he was stagnating in the school he taught in, so the change was welcome. Meeting Connor is an added bonus (for him and me) because it made his life have more meaning and just made this reader all around happy.

Posted by multitaskingmomma at 3:12 AM