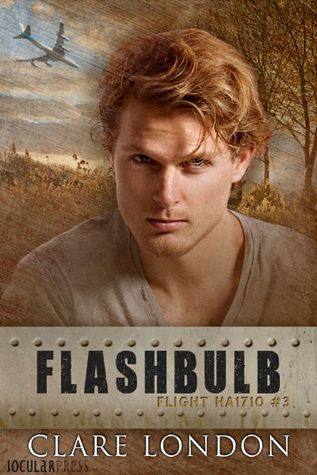 Blythe Harris was taking his first flight to the USA and hopefully a whole new client base for his bespoke upholstery business. An adventure for him, he was both nervous and excited to attract the attention of a handsome steward. Things might have gone further – if Flight HA1710 hadn’t failed.
Marc Stafford is a self-confessed player, and he used his charm to seduce his cute passenger. But in the aftermath of the crash, he’s struggling to recover his confidence. The TV declares him a hero for saving passengers, but at night his nightmares trigger painful flashbulb memories of the crash.
In an Irish hospital, Bly realises that although his broken leg will recover, his career may not. And in Chicago, Marc can’t face returning to work. Neither of them can shake off the memory of their brief, sexy encounter. Both of them need to be with someone who understands exactly what they’ve been through. And on a middle ground they can make all their own.

I have been following the  Flight HA1710 series since I first read Retrograde by RJ Scott. This is a series revolving around one tragic plane crash that killed around 7 people but those affected went beyond the cabin of that plane. In Flashbulb, we see two people who survived the crash.

We have Marc Stafford, a mile-high junkie and all-around playboy who flirts his way through flights and lay overs. He is not what one would call 'relationship material.' However, he is a great attendant and despite the many complaints lodged against him, he still has his job. The thing is, Marc is not feeling his job anymore. Until, that is, he chances upon first time flyer Blythe Harris whose nervousness Marc found appealing.

On his first flight ever on a plane, Blythe is nervous and not handling it well. The long delay before the plane lifts off is killing him. It was only the presence of Marc, a handsome flight attendant, that manages to calm him. Until that is, the plane lurched and he sees the controlled panic in Marc's face. When he wakes up, it is to a nightmare of broken bones and the inability to be creative once more.

The story of Marc and Bly is one I would consider, the darkest of the three that I have read so far. Their painful process of trying to get out of the funk of PTSD induced nightmares that crosses over to motor skills, it was too real to bear. There were times I wondered if the two would ever manage to get out of their depression.  Yes, this is a romance but it is a romance in a stressful setting. In reality, I would not know if theirs would last. I hope it does for the two are just fitting of each other and deserve the peace in their love.

This is a beautiful, if dark, installment to an already dark arc but it is definitely worth the read.

Posted by multitaskingmomma at 8:27 AM