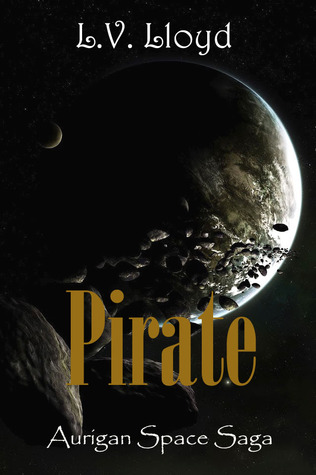 
Undercover agent Liam Connell stared at his captor. He looked like a pirate from a holovid— black trousers, a white, puffy-sleeved shirt, and a purple sash wrapped jauntily around his waist. Wavy black hair fell to his shoulders and ... Connell couldn’t believe it. He actually had gold hoops hanging from his ears. The pirate ran his forefinger lightly down Connell’s cheek and smiled. “Mmm! Mmmm! What do we have here?” Just what had Connell gotten himself into?

Pirate is about Nicholas Mars, a wanted pirate of the high space. His reputation is phenomenal: kidnapper, rapist, a space-age Robin Hood. He is just as cunning and his weakness is someone who appears not to like him as a lover. His adventurous spirit is taking the Aurigan Space by storm. When he steals the Patrol Ship, Ebano, he made a huge mistake. He gets the ire of one Captain Rice who swears (like a character of an opera mind you) that the pirate will regret his actions.

Liam Connell is tasked to insinuate his presence into the Pirate Mars' crew, and maybe his bed. This terrifies Liam as he is straighter than straight. But his assignment is clear, he is to become an undercover agent and present Rice with Mars.

When Nick spots Liam, he likes the type but is hyper aware that this man may just be a plant to capture him. This is a complication because he is very attracted to the younger man. His feistiness and independence is a breath of fresh air. Unfortunately, Liam is found out, and this is where the real story unfolds.

What follows next is a space adventure involving the running and capture of Nick and Liam. I cannot spoil why they are both being sought, you have to read that yourself. Just know that this is not a story connected to the Aurigan Space Series  but this does happen in the same space vicinity. The terms are the same, the world is the same. The story is just one of those offshoots to it.

I have to be honest, it took until the 50% of this read before my interest got piqued. It was ho hum in the first half, but it had to be for there were a whole lot of things going on that had to be established. The second half, now that was the real kicker. It was impossible to drop this after that. I persevered for I follow the Space series and was curious: where is the author taking us with this?

Now, for those who are wondering about the ending? hehehhehehhee oh, what an ending! I cannot reveal anything, but I just want to say: that was AWESOME!!!

Overall, yes, the first half was good, but the second half was spectacular. Four stars rounds it up.


Posted by multitaskingmomma at 1:07 AM