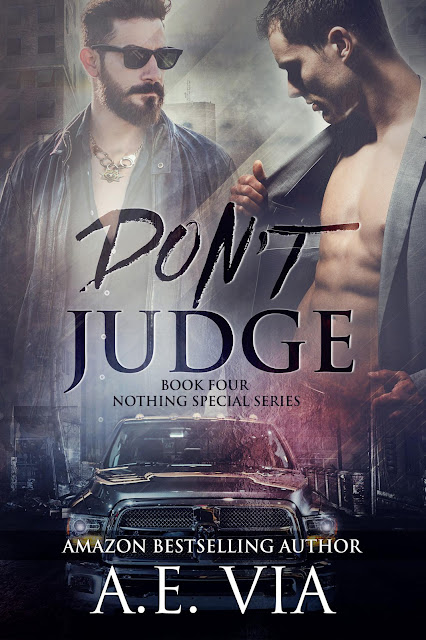 Detective Austin Michaels didn’t think life could get any better after he was accepted into the most notorious narcotics task force on the East Coast, headed up by two of the baddest’ Lieutenants with the Atlanta Police Department - Cashel Godfrey and Leonidis Day. Michaels knew he would fit right in as the team’s sniper, having received his fair share of commendations for marksmanship. He was just as badass as the rest of the twenty brothers that made up their team. But when Michaels lets their prime suspect get away from a huge bust with over a quarter of a million dollars in drugs, he’s willing to do whatever it takes to make it right. Left with no other options, God chooses to bring in outside help, calling on his long-time friend and bounty hunter, Judge Josephson. Judge was considered one of the best trackers during his enlistment in the United States Marine Corps. After retiring, he used those skills to become one of the most sought out fugitive trackers in the country. When Judge gets a call from his old friend needing his help, he quickly tells God, yes.Still embarrassed, and intent to prove himself, Michaels immediately volunteers to partner up with Judge to get their suspect back quickly and quietly. Neither man wanted or needed a partner. But, after Judge and Michaels get on the road, the hate/lust relationship they quickly develop between them will either make them heroes… Or get them killed.

I have to admit, A.E. Via fast became one of my favorite authors because of books like the Nothing Special series I follow. I love a good romantic story set in an action packed thriller with guns and amo lying left and right and the men dodging bullets. Best of all, I love her imperfect and totally flawed men who speak without thought and act without hesitation.

For this installment, we get the quiet guy, Austin Michaels or Michaels to everyone other than family. He is the college kid who uses his education to map out the criminal minds. He is also one heck of a sniper and uses it to full advantage. That is, until he messed up and someone got away. He thinks he messed up.

For the title of the book, we have Judge, the uber delicious bounty hunter. He has a beard. I don't do beards. But don't judge, he is super yummy and Michaels agrees with me. With us. With all those who see and straighten out when Judge walks in. He is a bounty hunter whose partner is a humongous dog by the name of Bookem.

Now Bookem. Everybody knows I love dogs and thankfully, Book is adorably K9 and knows it. He plays his cuteness to full effect, and his muscles to make the criminals weep. (On a side note: I keep thinking Book 'em, Dano)

The rest of the guys are here as well, and each of them have something to contribute to this story. Of course, Judge and Austin go through a whole lot of hell to finally get together and be happy. They are faulty, these men. Totally ruthless, skirting the law to get their perps. Take these into consideration, as well as the title, when reading this action packed crime thriller. As the book says: Don't Judge.

Another side note: I pre-ordered this before I got the word from the author of this blog tour. The copy I got, it was impossible. But thankfully, the author took notice and immediately corrected that which Amazon put out. Let me tell you guys. The editing is for real, its real good.

Excerpt
Judge carefully scanned each document that was relevant to tracking someone. He could care less about what laws the man had broken, it wasn’t his job to determine if he needed arresting or if he as guilty. His job was to bring him in. “I take it you want this guy alive.” That comment got him a lot of stares.
“If you don’t mind.” Day said between clinched teeth.
Judge looked around. “You do understand this guy is a murderer. You think he’s gonna roll out a welcome mat for me.” 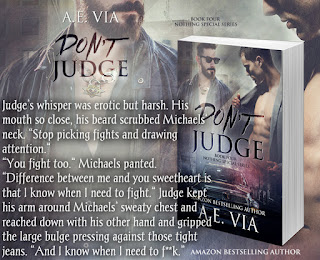 He watched God rear back in his seat and run his hands through his long hair. “I know that, Judge. Just try. I’m not telling you to get yourself killed. But if you don’t have to take a kill shot, I’d appreciate it.”
“I make no promises.”
“Of course not.” Day said drily. “you just make sure to bring my sniper back alive and you won’t have any beef out of me.”
Judge snapped back up, pulling his cane out of his mouth. “Excuse me.”
God grimaced and glared at Day. “I hadn’t exactly told him yet.” He whispered but Judge heard him loud and clear.
“Told me what, God?” Judge stood. “And it better not be what I think it is.”
“Judge. I need this guy in custody and I need it done quietly. So I want one of my guys to go with -”
“Hell no.” Judge backed up. “I don’t need any help you know that.”
“He’s not gonna be there to help you, he’s there to keep things quiet.”
“You think I need a goddamn do-gooder-baby-sitter, telling me how to do my fuckin’ job?”
“You know damn well I’m not saying that. I need assurance that this will keep kept quiet and I also know you wouldn’t be bothered with giving me updates.
Judge scoffed. “Quiet. You think I haven’t heard of these two.” He pointed to the two men that were introduced as Ruxs and Green. Now that he had a face to go with the names he knew who to point to. “These guys are the epitome of loud noise and ruckus.”
“Because that’s their job.”
“Fuck no.” Judge growled.
“You owe me, goddamnit!” God stood and came around the table to square off with him.  Bookem stood and growled but didn’t attack. He’d never do that without command. God ignored the warning and stood directly in front of him. “Now, I’m asking for my favor. Are you going to refuse me, Judge?”
Son of a -. Judge gritted his teeth. God knew he’d never go back on his word. God gave him a few minutes to stew in his anger. All eyes were on him, waiting. Reluctantly he asked, “Who is he?”
“Detective Austin Michaels.” God replied. His voice and demeanor looked as if he was proud to present this guy.
Judge rolled his eyes when he saw Detective Michaels stand up. Of course it had to be him. The sexiest one of them all. Shit.  When the man came over to glare at him, Judge had to be sure not to show his surprise or amusement. The little fucker. Actually he wasn’t so little. He was tall and built. Compact muscles over smooth ivory skin. No doubt he was as macho and straight as an arrow, those kinds usually were. Judge was eager to see how the man handled himself.

A.E. Via is still a fairly new author in the beautiful gay erotic genre. Her writing embodies everything from hopelessly romantic to spicy to scandalous. Her stories often include intriguing edges and twists that take readers to new, thought-provoking depths.
When she’s not clicking away at her laptop, she devotes herself to her family—a husband and four children.
While this is only her seventh novel, she has plenty more to come. So stalk her – she loves that - because the male on male action is just heating up!
Go to A.E. Via’s official website http://authoraevia.com for more detailed information on how to contact her, follow her, or a sneak peak on upcoming work, free reads, and where she’ll appear next.

Posted by multitaskingmomma at 6:53 AM