“Lil’ Bro,If you’re reading this, then something obviously happened and I’m not going to be around. I wanted to let you know how much I love you, and you don’t have to tear yourself up over this. I’m the one who chose to enlist, and I believe I’ve served proudly for the last few years. I know this won’t ease your mind any, but I believe I’m probably in a better place now. Please don’t be sad. I died doing what I loved, fighting for my country. I wish I could be there for you when you tell Mom and Dad about you being gay. Just know that I am with you in spirit. Look to Chase for guidance. I know he’ll be the big brother for you I can no longer be. The guys will be a great support for you, and they won’t care that you’re gay. They’re a great group of guys, and they’ll treat you just like I would. They’ll be a support system for you when Dad blows up, and you know he will. Be safe and know I will be watching out for you from the other side.Love, Sam.”Uncommon Valor is not just a story of a gay man, it is the fulfilling story of a young man who is on the verge of discovering his true self and he has the perfect prop to do that. He is also about to become a Dad. Will he pull through as a gay man and a Dad? Or will he fall upon the wayside and reject his newborn child, and in so doing, also reject the man of his dreams?

This was a really interesting and sweet read. The sotry of how a law student loses the one brother he had who supported him in every way and loved him unconditionally dies in combat. This older brother, Sam, was part of a tight team who accepted and supported each other unconditionally as well. When Jason loses the brother, he thought he lost all but in fact, he gained more than he expected. Or could chew. He is left a letter to rely on Chase, and he does. What he never expected was to find the love of his life.

This should have read simple the way the plot opened but life gave Jason a twist of fate and he finds himself having more responsibilities and may just lose his chance of becoming the lawyer he always wanted to be. The reason? An unexpected woman comes in pregnant and carrying his child. He wonders a bit but holds on to his responsibilities. When more questions rise and no answers are given, he realizes that he may not have just lost a brother, but he may have lost something else. All throughout his journey, Chase and the rest of the team give him more support and love than he ever imagined. The only hurdle is to find the answers and gain acceptance from his father.

There is a lot going on here, one of them having to rethink because some of what goes on here is no longer the case. DADT is no longer in effect, for one so I did wonder why it was still referred to. Thankfully, it was handled quite well even if I did not agree on the handling. The point of resolution is reached and there is a tentative HEA but I think this is more like an HFN. I need more to really settle on the HEA.

Overall a good, light read to while the time away. Recommended for those who love the joys and angst of men in uniform loving each other in a special way. Add in the joys of fatherhood, then yes, you'll love this.

Last weekend with the platoon was great.
I met a ton of new people, and the guys were really supportive when I told them. I hadn’t heard anything from my Mom, so I wasn’t sure what to think about that, but I’d decided I wasn’t going to worry too much. I was on cloud nine from having spent time with people who didn’t care I was gay and treated me like one of the guys even though I wasn’t a Marine.
That all came to a halt when I ran into Tina in the dining hall on campus during the week.
Tina uses her beauty to her advantage. She’s medium height with red hair and green eyes. Whatever she said was right and she was of the opinion that no one could outsmart her. Personally, I tried to stay away from her if I possibly could.
But, she had a crush on me.
I never got the chance to tell my brother that during a night of drunkenness I had slept with her. There was a part of me that always felt something else had been involved, but I couldn’t prove it. I didn’t even know if we did anything. All I knew was I woke up the next morning in the same bed with her and both of us were naked. It wasn’t something I was proud of, and I honestly hoped I would never see her again. Unfortunately, we were both in law school together, so I knew that wasn’t going to be an option.
I’d almost completely forgotten about the incident because it had happened at the end of the semester and I had taken the summer off. The new semester had just started, and I had been lucky enough to not see her in any of my classes or around campus.
I was shocked to see her with what I would consider a baby bump, but I didn’t want to make any assumptions. I pretended to not see her, but she saw me.
“Jason! I need to talk to you,” she said, and grasped my elbow from behind.
“What do you want, Tina?” I yanked my arm out of her grasp with a snarl.
“It’s a private matter.”
“We can talk tat my house, but that’s all that’s going to happen.” I turned and walked away, expecting her to follow me to the parking lot. As it turned out, we were parked fairly close to each other, and I motioned for her to follow me as I got into my car.
§

We arrived at my house and I was still trying to figure out what she wanted to talk to me about. I had a feeling I wasn’t going to like it.
Inside, she headed for the lounge. “Would you like something to drink?” I asked. When I turned to face her she held her stomach in a protective manner.
“Water would be nice.”
“Have a seat and I’ll be right back.” I said, placing my bag on the floor by the door.
When I returned, she was standing in front of the bay window looking out over the park. “Here you go.” I held out a bottle of water to her as she turned around.
“Thanks, Jason. I’m sorry to put you out like this, but I needed to talk to you and I didn’t want to do it with people around.”
“What’s going on? I haven’t seen you since the end of spring semester.” I walked over and took a seat on the couch and waited to hear what she had to say.
“I went home for summer break and some surprising news came up just before I came back to school.” She came over and sat down next to me.
“Spit it out,” I said, frustrated. I just wanted her gone; something about her really irked me.
“The thing is, just before I came back I realized that I had missed my period so I went to the doctor and took a pregnancy test. I’m pregnant.”
“What’s that got to do with me?” It felt like I had been punched in the gut.
“Well, I hadn’t been with anyone for a while before you and I hooked up at the end of the semester.” She licked her lips and wrung her hands.
“We didn’t hook up. I got way too drunk and don’t remember anything until I woke up the next morning with you by my side and naked.”
“Why do you refuse to believe that what we shared was something special?” she whined. “You know you love me, you only need to admit it and we’ll be happy together as a family.”
“It wasn’t special. What do you want from me?”
“I want you to be a father to our child. I want us to be a family.” She tried to put her hand on my arm. I pulled away.
“We will never be a family. What the HELL were you thinking? Obviously you weren’t; that’s the problem.” I walked over to the bay window and glared out. “If the child is mine I’ll support it and even take custody of him or her, but we will never be together. As soon as the baby is born I’m going to fight for custody and before I commit to anything there needs to be a paternity test, until that time you are nothing more to me than a pregnant woman. Until you have further information, I think this is all we have to talk about.”
“We’d make good parents together. Why are you refusing to admit that?” she cried.
“I have no doubt that we will be good parents, but we won’t be a couple. I’m gay and will not be in a relationship with any woman. Now, if there’s nothing else, I think that it’s time for you to leave. Let me know when you set up the paternity test and I’ll be there. We’ll talk more after the test results come back.” I opened the front door and waited for her to leave. I was being mean and harsh, but I was pissed about what had happened, mostly at myself because I let myself get wasted at that party. I wished I could remember what happened that night.
She stormed past me and went out to her car mumbling under her breath. Part of me hoped I was the father, but there was a greater part of me that hoped I would have nothing more to do with her. 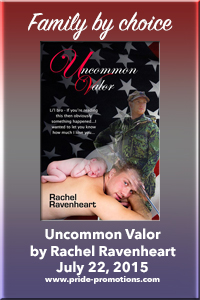 About the author:
Rachel Ravenheart is new to the literary world, but has had the desire to write since she was in junior high school. She moved from a small town in Iowa in time to start high school in Louisiana.
Rachel lost sight of writing as she got bogged down with sports and school. Her dream of being a writer forgotten as she looked to the future to study Political Science with the hope of going to law school when she moved to Texas.
To make her way in the world she got wrapped up in the field of nursing when she got a job as a C.N.A. and soon even her dream of law school was forgotten. Strangely, thanks to an injury she was at home recuperating and was bored when she remembered her love for writing. Never thinking she would ever get published she began.
It was writers like Rob Colton, Mann Ramblings, and Alicia Nordwell that inspired her creativity. She found GayAuthors.org and after some encouragement she decided to post her first story. With the enthusiasm of readers her confidence grew and she took the step to send off her first story to be published. It was with great delight when she was offered her first contract. Hopefully, the first of many.

Posted by multitaskingmomma at 5:43 AM