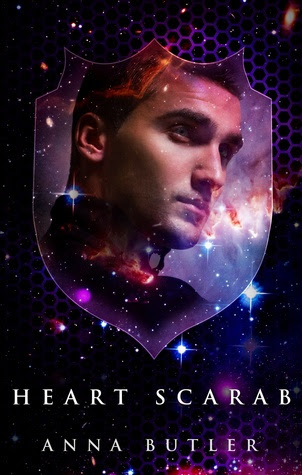 In Heart Scarab, set more than a year and a half after Gyrfalcon, Shield Captain Bennet’s company is on a planet in imminent danger of being overrun by the Maess. Telnos is an unpleasant little planet, inhabited by religious fanatics in the festering marshlands and unregistered miners running illegal solactinium mines up in the hills. But the Maess want Telnos, and Bennet’s job is to get out as many civilians as he can. The enemy arrives before the evacuation is complete. Caught in a vicious fire fight, Bennet is left behind, presumed dead.
His family is grieving. Joss, his long-term partner, grieves with them; lost, unhappy, remorseful. First Lieutenant Flynn has no official ‘rights’ here. He isn’t family. He isn’t partner or lover.
All he is, is broken.

This is book two of the Taking Shield Series, book one of which was Gyrfalcon.  It continues the somewhat disjointed story of Captain Bennet of Shield, and Lieutenant Flynn of Fleet.  Ms. Butler’s universe exists on a planet that thousands of years ago became the last refuge of humanity, and from which they subsequently spread across the galaxy.  There are three divisions of military involved, Infantry, Fleet, and Shield; of which, Shield is the force that does the behind-the-lines dirty work that the other divisions aren’t trained to do.  Think of them as Delta Force, Army Rangers, and Navy Seals all rolled into one elite force.

In Book one, Bennet and Flynn met, had a four- or five-day affair near the end of the book, and went their separate ways.  In Book two, Captain Bennet and his Shield group are assigned the task of removing illegal settlers from a remote planet that is threatened by an alien enemy, referred to simply as the Maess.

Bennet’s group comes under attack during the evacuation, and he is left behind, presumed dead.  Part of the book spends a great deal of time with flashbacks and exposition, as people who know Bennet react to his presumed death.  Too much time was spent on that, as far as this reader is concerned.

In any case, Bennet’s old force is eventually sent to the planet to rescue any survivors among the settlers, and Bennet is discovered, alive, mostly well, and leading a group of settlers and ex-military.  He is seriously wounded during the evacuation, and spends weeks in the hospital.

During his recovery, his tumultuous relationship with his long-time lover comes to and end, and there’s enough angst in that situation to satisfy even the most jaded of readers who enjoy wallowing in misery vicariously.  During this period, Flynn, now on a six-week leave, comes to visit Bennet.  They spend the better part of five weeks in bed, celebrating the love they now admit they feel for one another.

This book, like its predecessor, is in dire need of a glossary.  In the narrative, many things are referenced that were explained in the earlier book, but not in this one.

The first book had a really interesting story, badly damaged by careless writing, and poor editing; and I reluctantly concluded that Ms. Butler has no respect for either her readers nor her craft.

She consistently makes the same mistakes in this book—largely having to do with invalid and non-standard dialogue tags.  Her characters don’t always ‘say’ things to each other.  They often grumble, demand, snap, and protest, among other things; none of which are acceptable dialogue tags.

In addition to the above, it is obvious that Ms. Butler has little or no respect for the English language, either.  This book was published in the US and Australia by a US-based publisher, and uses British spelling throughout.  I’m well-read enough to be able to deal with things like honour, colour, and other UK spellings, although I find some of the usages annoying.


What became apparent, as I read this book for the second time, was this; Ms. Butler seems to have a disdain for dictionaries, and apparently likes to make up her own rules as she goes along.  She is particularly fond of using two words when one is correct, i.e., straightaway becomes straight away.  I checked this with Merriam-Webster, and with both the Oxford and Cambridge dictionaries in the UK, and straightaway is one word on both sides of the Atlantic.  She also hyphenates words when it isn’t necessary.  Other examples abound.

Where the first book suffered from poor editing, I found myself wondering if this book was edited at all.  There are grammatical errors here and there, and I’m not talking about the differences between US and UK usage.  There are also careless errors everywhere.  For example, the word story and storey were both used in the same paragraph when describing a multi-story house.  In the UK, they use ‘storey.’

The bottom line is this—the book felt as though it had been hurriedly written.  Much too hurriedly.  I seem to recall reading somewhere that the author has a critique group, and I suggest to her in all honesty that they are serving her badly.  If I were she, I would fire them all and find another group to work with—one that can be honest with her about her writing.  Presuming she can find a group who knows anything at all about writing.

As for the sex.  Why is it that M/M authors assume that anal penetration is the be-all and end-all of gay sex.  I’ve been gay for more decades than I care to think about, and I can state, without fear of contradiction, that a great many gay men are totally oral.  Some authors, particularly female authors seem obsessed with penetration.  A fellow author suggests that they frequently want one of their male characters to act more like a female, and he may be right.  This is also true when the author describes the way the men react to sexual experiences.

Then we come to the end of the story.  Bennet and Flynn have been having sex virtually nonstop for the better part of five weeks, and Flynn’s leave is up.  They are both devastated at the prospect of Flynn reporting back to Fleet and having to leave Bennet behind.  The extent of their emotional devastation over the idea of separation is totally unbelievable.  Bennet is a strong military type, accustomed to going behind enemy lines and blowing up things.  Flynn is essentially a fighter pilot, who regularly faces equally hazardous situations.  Men like that are always good at compartmentalizing things.  They have to be in order to survive.  It is not realistic to have them acting like refugees from a Victorian novel, or a Harlequin romance.   For that matter, I don’t think most women act that way, either.  Certainly not the ones I’ve known over the years.  The cowering vapid heroine having vapors on her fainting couch is a total construct of romance writers, and is not to be believed.

The book more than hints that the two men might seek solace with females when they can no longer be together, and that sets up possibilities for the next book in the series that many readers will neither like nor believe.

I give the book three stars, because the story is so interesting.  It is unfortunate that the writing doesn’t measure up to the story.


Note: Copy provided by Pride Promotions for an honest review.