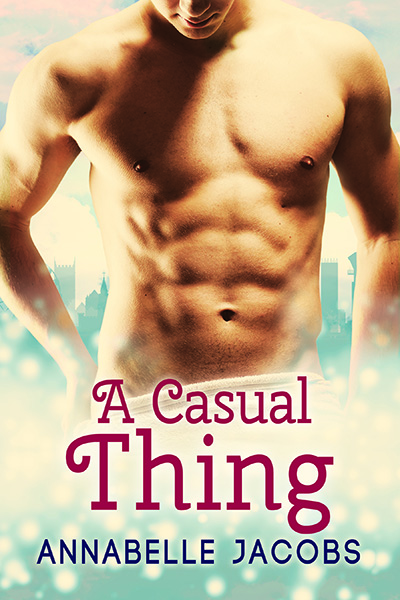 Patrick Mason travels to Bristol to spend the summer with his brother, Ben. He’s cat sitting for the first two weeks while Ben goes on holiday. But Ben neglected to tell him he wouldn’t be doing it alone. Will Adams—Ben’s mate and Patrick’s long-time crush—is staying in Ben’s guest room while he waits to move into his new house after a breakup.
Against his better judgment, Patrick convinces Will that a little no-strings fun is just what they need. Patrick doesn’t want to get involved with a guy on the rebound, and Will isn’t interested in starting something serious with a student. But Patrick’s never been good at separating sex from feelings, and this time is no exception. As their weeks together draw to a close, they need to decide if they have something worth pursuing or if it’s really just a casual thing.

Review by: multitaskingmomma
My Rating: 3.5 Stars

I love Annabelle Jacobs' books, especially her sci-fi and fantasy works. This is, I think, her first that I've read that is contemporary. Although the writing style is still the same enjoyable, fast, and light read, I still struggled a bit. Not because of the romance, but because of some details that I found lacking. One question I have for one is: what does Will do exactly? He goes to work but I can't find out exactly what he does... maybe I missed it, if I did, please leave a comment.

Now, for the relationship and their affair, I really liked this one because it did start out as a truly casual thing. The relationship took for a turn because Patrick felt more than Will. Will on the other hand, also felt a little bit more than he could accept so his character more or less left me a bit angry. He is struggling with issues like, rebounds or not, too old or not, his best friends' younger brother and all. Although he acted on his needs, his mind kept going on a lock down. Despite his having no intention of hurting Patrick, the latter still got the hurt.

True, they did resolve their issues, then again, why not? This is a romance right? But I need a follow up story on what happens next. I know this may not be a series, but this seriously needs a follow up and soon. I don't feel what happened in the end is what Patrick deserves. Why? Because Patrick is adorable but not in a twinky, uber sweet or naive way. Patrick is a character I would love to hang out and talk with. He is so nice and young but steady with head placed firmly on his shoulders. I want more for him. Overall, a good fast romantic read. 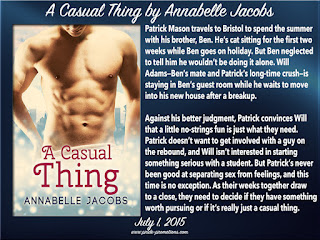 Ben raised an eyebrow. “I see living with Sean all these years has done some good after all.”
“Ugh,” Patrick groaned. He wasn’t that bad. “He’s my roommate, not my mum. He doesn’t make me do chores you know.” Sean was also his best friend, and three years of living together at university had made Patrick more self-sufficient, but he wasn’t about to admit it. “Anyway,” he said, walking down the hall as he spoke. “I’m assuming you’ve cleared out all your shit from the spare room?” Patrick looked back over his shoulder as he opened the door. Ben usually shoved anything he didn’t use in there until he either gave it to charity or took it down to the rubbish tip.
“Yeah, um… about that….” Ben let the sentence hang there as Patrick opened the door to the spare room and stopped in his tracks.
Okay, so it wasn’t full of Ben’s stuff, but it wasn’t empty either. The bed looked recently slept in, the quilt pulled up sort of straight but the pillows at odd angles, as though it had been made in a hurry. A couple of shirts hung on the wardrobe door, and the desk had a laptop on it and some toiletries that definitely belonged to a guy.

Ben appeared behind him, scratching at the back of his neck, but not looking particularly bothered. Patrick waved a hand around the room and raised his eyebrow. “I guess I’m not staying in here, then?”
“Sorry, it only happened a couple of weeks ago, and I forgot all about it. But he’s only here for another two weeks, so you can sleep in my room while I’m away.” Ben gestured to the door opposite and picked up Patrick’s bags again. “I’m off in the morning, so you only have to sleep on the sofa for one night.”
Patrick followed him, trying not to feel disappointed at not having the place to himself. He collapsed on Ben’s bed, making sure to hang his shoes over the edge. “So, who is it, then? Do I know him?” He narrowed his eyes, watching as Ben dropped both bags in front of the wardrobe and turned to face him. “It better not be someone old and boring who’s going to judge everything I do. Christ.” He threw his arm over his face and let out a put-upon sigh. “I might as well have stayed at home.”
“He’s not old. He’s a year older than me.”
“You’re old.”
“Shut the fuck up, or I will send you back home.” The bed dipped as Ben sat down. “And yes, you know him. He’s a good guy—I wouldn’t leave my little brother alone for two weeks with someone I didn’t trust completely.”
Patrick sat up and leaned on his elbows, taking in the slightly shifty expression on his brother’s face. Nothing normally fazed Ben, and he’d said that Patrick knew the guy and that Ben trusted him, so Patrick didn’t see what the problem could be. He liked to think he was pretty easy to get along with. He maybe had a lot of energy, which irritated some people, but he tried to tone it down with anyone other than close friends or family. Ben’s mates all knew him pretty well anyway—Patrick usually came down to Bristol for at least a few days every time he had a break from uni.
“Well, I’m assuming it’s one of your friends, and honestly, Ben, they’re a great bunch of lads, so I don’t get why you’re being weird.”
“I’m not being weird.”
Patrick gave him his best “yeah right” look and sat up a bit. “Seriously, I won’t have a problem sharing with any of them,” he said, nudging Ben with his shoulder. “Well, except Will maybe, but that’s only because—”
Patrick stopped, the words dying on his tongue as he noticed Ben wince.
“No.” He jumped off the bed, fisting his hands in his hair. “No fucking way. Ben, please tell me you’re not leaving me alone for two weeks with the guy I have a huge unrequited, and frankly, embarrassing, crush on?”
Ben shrugged. “He needed somewhere to stay. I’d sort of forgotten you had the hots for him.” 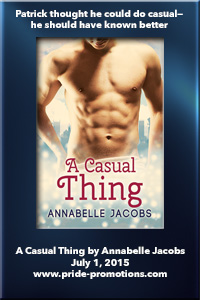 Annabelle Jacobs lives in the South West of England with her husband, three rowdy children, and two cats.

An avid reader of fantasy herself for many years, Annabelle now spends her days writing her own stories. They're usually either fantasy or paranormal fiction, because she loves building worlds filled with magical creatures, and creating stories full of action and adventure. Her characters may have a tough time of it—fighting enemies and adversity—but they always find love in the end.