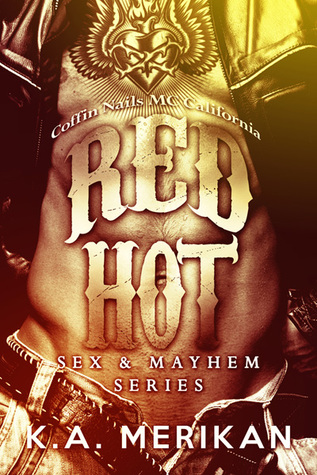 --- Live fast. Die young. Fuck hard.---
Red Jack. Rude. Crude. Horny ginger mess. In love with… himself.Loki. Deadbeat. Volatile. Stalker. Terminally ill. Fatally in love.
When it comes to men, Red Jack has three rules. The guy has to be hot, out of town, and not up for repeats. It’s a good way to keep the gay flings far away from the eyes of his brothers in the Coffin Nails Motorcycle Club, and he will make damn sure it stays that way. When a hookup takes an ominous turn, and the sexy stranger turns up at his house, the heat is on. Loki invades his life and just won’t leave, wreaking havoc wherever he follows Jack, but getting rid of him becomes harder with every kiss.
The world crumbles around Loki when he finds out he has cancer. As if his life wasn’t shit enough already. With only a few months left, he decides to live to the fullest and get every last wish on his bucket list fulfilled. One of those is fucking the hot bearded biker he meets the same night he got the bad news. Big, confident, and dangerous, Red Jack is all Loki ever wanted in a man. After all, he deserves one last shot at love. Who cares if Red Jack is a stubborn, closeted asshole? Loki knows what he wants, and he won’t settle for anything less. Even if it kills him.
POSSIBLE SPOILERS:
Themes: Outlaw motorcycle club, criminal activity, hurt/comfort, abuse, sexual orientation issues, stalking, revenge, bucket list, coping with illness, first love
Genre: M/M erotic dark romance, suspense, drama
Length: ~105,000 words standalone novel (HEA)
WARNING: Adult content. Explicit gay sex, strong language, graphic violence, abuse scenes. Reader discretion advised.


Reviewed by: multitaskingmomma
My Rating: 4 of 5 Stars

Where do I begin? This simple story of how love between two men, one straight, one flamboyantly gay set in an MC world where when found out if gay, the straight guy dies. Disappears.

These are probably the most loco guys of the Sex & Mayhem series and frankly, they are the darkest as well. There is no doubt, that warning should be heeded. The possible spoilers is the fact of this story. But inside, while reading it, just loco...

Loki is as crazy as his namesake and probably just as beautiful. This is no weak bottom, he is actually quite overwhelming. He is not someone I would want to fag hag to and I am a confessed hag.

Now for Red. He does not have a red nose but his furry face may just make him bearish in both  countenance and temper. He is red headed, fiery, temperamental and deadly. He does not just skate between law and crime, he embraces both to his own advantage. When he hooked up with Loki, sent him a naked pic of his (pole?) he did not contend to Loki's craziness.

Stalked and fought, Red did not know what hit him. All he knows, no matter what happens, he needs Loki there and give him the (adoration?) he deserves.

This is an incredibly violent installment. The participation of Sam from Stripped Raw  lends quite an interesting look into Red's character. Add in Monster, and we get a monstrous edge of torture. Combined with Loki and Red's adventures, we get a phenomenally violent  plot with a capital V.

For those who follow this series, this gives us an impressive look into the violent world of the motorcycle clubs. For those new, I suggest you read the first books first, get to know and love the men in them, then tentatively dip a toe and test the waters. For myself, I had breakfast with the Merikan men and drank so many cups of coffee.

Note: Copy provided by authors for an honest review.


Loki looked up when something creaked close by and saw Jack watching him from the open patio door. He smiled from deep within and waved, inviting Jack over. His chest swelled with the heat of joy that spread through his body when he had heard the motorcycle arrive. Even the way Jack moved approaching him had Loki’s body tingling with excitement. Jack had such a masculine figure, narrow in the hips, wide in the shoulders, and he walked with a swagger.

But something was off, and Loki knew as much the moment Jack grabbed his hair. “What the fuck did you think you were doing at the club?” Jack asked in a cold voice and pulled Loki along the beach on his knees, ignoring the dinner and tea lights. A big purplish spot was spreading over his right cheekbone, like proof of Jack’s violent nature. Something was off about him, and the dry blood on his beard had to be a part of it.
“Jack? You wanted me to cook, but I didn’t want to break in again,” uttered Loki, holding on to Jack’s arm. A cloud of sand flew into his face from underneath the sole of Jack’s boot, and he coughed, luckily having closed his eyes quickly enough.
“How dare you try and humiliate me in front of my family?” Jack pulled so hard it hurt, but he wouldn’t let Loki get up from the cold, rough sand when he tried. “You are not my boyfriend, nor my cousin. You don’t know me. You are a complete stranger!” Before Loki knew it, a small wave hit his knees.
The dark water was trembling underneath him as he twisted back his head, looking up at Jack in the faint light of the approaching dawn. “Don’t say that. That’s why I’m here. Let’s go to the picnic and talk.”
“Oh, no.” Jack squinted at him, and walked into the water in his boots, pulling Loki along. “You tried to out me to my friends. You don’t get to toy with my life. Do you understand?”
Loki didn’t get to answer, as Jack pushed his head under the chilly water. Only then, when the freezing liquid made him stiffen, fear crept out of the darkest corners of Loki’s mind. There he was, thinking he didn’t fear death anymore. Oh, how wrong he had he been... His lungs constricted, and even as the icy water shocked him, soaking all his clothes, the salty liquid in his mouth seemed dry and grainy, threatening to burn him from the inside. Miss Merikan is the pen name for Kat and Agnes Merikan, a team of writers, who are taken for sisters with surprising regularity. Kat’s the mean sergeant and survival specialist of the duo, never hesitating to kick Agnes’s ass when she’s slacking off. Her memory works like an easy-access catalogue, which allows her to keep up with both book details and social media. Also works as the emergency GPS. Agnes is the Merikan nitpicker, usually found busy with formatting and research. Her attention tends to be scattered, and despite pushing thirty, she needs to apply makeup to buy alcohol. Self-proclaimed queen of the roads.
They love the weird and wonderful, stepping out of the box, and bending stereotypes both in life and books. When you pick up a Merikan book, there’s one thing you can be sure of – it will be full of surprises.

Posted by multitaskingmomma at 8:54 AM