Review Request: Beyond the Scars by Louise Lyons 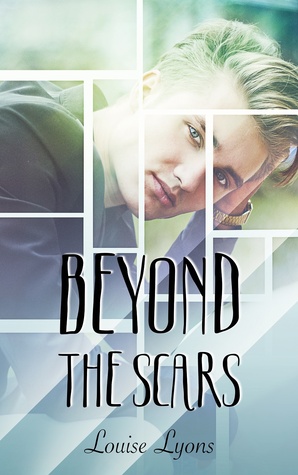 
After years of physical and mental abuse, Tommy Chadwick finally finds the strength to leave Colin, his tormentor. But Tommy soon finds that escaping his violent boyfriend was only the first step on his path to recovery.
Now he must overcome feelings of worthlessness in order to rebuild his battered self-esteem. Tommy’s lack of self-confidence prevents him from going out... at first, but then has him ricocheting from one man to another, desperately trying to please them in his search for love and acceptance.
After being rejected on New Year’s Eve, and then beaten after leaving the gay bar, he agrees to accompany his best friend, Sarah, to a martial arts club. There Tommy meets Marcus, a strong older man, who at first becomes his friend, introducing Tommy to new interests, and later, tentatively asks him on a date.
Will Marcus be the man to help Tommy put his past behind him and fall in love for real?

Tommy was a battered boyfriend but somehow he managed to get through the fear of it all and took a chance to leave and be free. And safe. With the help of his friend and a lone policeman, he was finally able to spring out of the house and relationship that was more a prison than a home. Now this is where the story begins...

Tommy, probably as a delayed reaction to the whole experience, becomes someone I did not care to like at all. In fact, he made some drastic and obnoxious decisions that made me question his sanity. Why? Because they were all actions that cried out for help and even he himself could not hear the screams.

Well, it should. Many a times men and women coming from an abusive relationship end up in another one because they seek an answer they did not even have a question to. That made Tommy such a real character to me.

Now, who is Marcus? Well, he is a man who also went through the ringer and he had been in that dark place Tommy was when they first meet in martial arts class. Tommy had wanted to learn self-defense, yet another familiar move for those who got caught against a wall of hatred. In these classes, he learns patience, how to listen to what his body was telling him, and to trust his instincts. Although these three were not enumerated verbatim in the book, that is the gist of the class and Tommy absorbed the lesson like a sponge. In the process, he grew as an individual who finally looked up one day and saw that there in front of him, was Marcus. As the two began their relationship, we readers get the romantic aspect of Tommy's story.

As for the evil ex, I am just glad that Tommy did not have to use his newly found skills for what is lesson behind martial arts? Think first, act later. Trust in instinct. Don't hit unless there is no other recourse. Tommy listened and acted on his instinct and that was not to back down from  a bully who is in actuality a weak individual.  This change in Tommy? That was what made him a better person and someone I really liked.

What got my attention? Despite the angsty premise, this turned out quite the sweet, light story to read. And the best part? I didn't have to suffer through uber emotions that dragged on for several chapters.

If you like a light, sweet and semi-angsty stories this is the one for you.