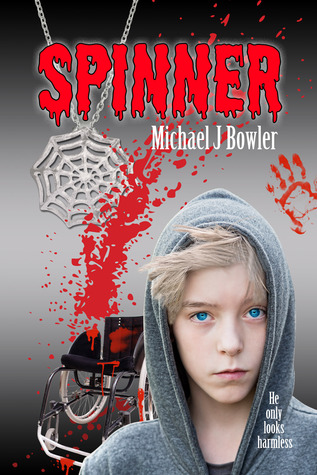 
Fifteen-year-old Alex is a “spinner.” His friends are “dummies.” Two clandestine groups of humans want his power. And an ancient evil is stalking him. If people weren’t being murdered, Alex might laugh at how his life turned into a horror movie overnight.
In a wheelchair since birth, his freakish ability has gotten him kicked out of ten foster homes since the age of four. Now saddled with a sadistic housemother who uses his spinning to heal the kids she physically abuses, Alex and his misfit group of learning disabled classmates are the only ones who can solve the mystery of his birth before more people meet a gruesome end.
They need to find out who murdered their beloved teacher, and why the hot young substitute acts like she’s flirting with them. Then there’s the mysterious medallion that seems to have unleashed something malevolent, and an ancient prophecy suggesting Alex has the power to destroy humanity.
The boys break into homes, dig up graves, elude kidnappers, fight for their lives against feral cats, and ultimately confront an evil as old as humankind. Friendships are tested, secrets uncovered, love spoken, and destiny revealed.
The kid who’s always been a loner will finally learn the value of friends, family, and loyalty.
If he survives…


This story centers around Alex, who is blond, has just turned fifteen, and is wheelchair-bound, due to spina bifida.  And, as is often the case with this disease, Alex suffers from some learning disabilities.  Alex has a group of devoted friends, all of whom are, like himself, special ed children.

The story is an interesting one, but somewhat poorly written.  The writing is uneven and inconsistent, and there were times when this reader wondered if parts of the book were written by different people.  As is the case with so many current authors, this one tends to pepper the dialogue with bad or totally invalid dialogue tags.

Alex’s best friend is Roy, who is old enough to have a driver’s license, and picks Alex up in his F150 every day to drive him to school.  The driving force behind Roy is his unrequited love for Alex.  As the story progresses, we learn that although Roy has a driver’s license, he has reading difficulties, and is unable to read street signs.  Which of course raises the unanswered question of how he got his driver’s license in the first place, because he would have to have passed a written test.  The reader must suspend his/her disbelief, and take this anomaly as an article of faith, or the whole story falls apart.

One would think that any fifteen-year-old who gets most of his information from watching television would have a better vocabulary, learning disabilities notwithstanding, but Alex is constantly baffled by words he neither recognizes nor understands.  This is another area in which the reader’s disbelief must be suspended.

The storyline and plot contains some mysticism, combined with American Indian lore and Catholicism, and the horror is clearly defined and all too vivid.

Alex has a unique ability.  When someone is sick or hurt, he can heal them by taking the disease or condition into his own body and disposing of it.  This is the same idea that was the theme of the 1980 Ellen Burstyn movie Resurrection, in which the character portrayed by Burstyn suffered a near-fatal automobile accident, only to survive with a strange ability to heal people by hugging them and taking their diseases into her body.

Alex doesn’t understand how he does this healing and he calls it spinning.  The idea that Alex ‘spins’ people is thrown at the reader quite early in the story, and without elaboration.  Yet another bone of contention this reader has with the author—it should have been explained at first mention.

The story is full of slang used by teenagers existing at the bottom of the socio-economic ladder, which adds a degree of difficulty to understanding what they’re talking about.

There are at least three groups of wicked people out to get Alex because of his ability, and thereby hangs the plot.

The author, a teacher of special ed children, seems to go out of his way to paint them in an extremely bad way, particularly in the way he downplays their abilities and probably exaggerates their problems.

The characters aren’t particularly interesting, and most of them have few, if any, redeeming characteristics, other than their extreme devotion to each other.  That being said, the story itself is good enough to rate a score of three out of five.

Posted by multitaskingmomma at 8:31 AM