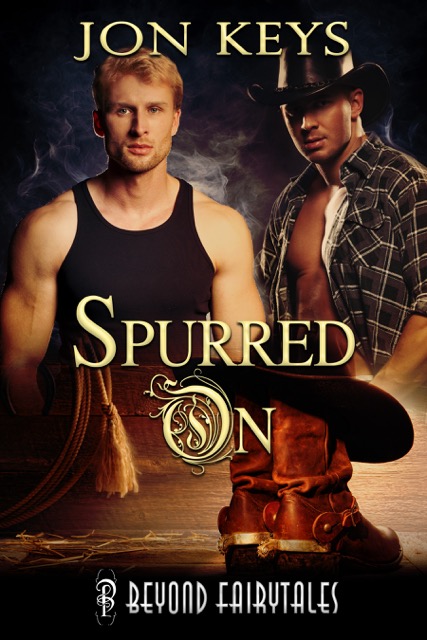 
Kegan’s new stepfather and stepbrothers are out to make his life miserable. Between the bullying and being overworked, he’s nearly at his wit’s end. When his mother leaves on an annual cattle buying trip for the ranch, he’s determined to suffer through. He must, if he expects to protect her like he promised his dying father. When the family of a young man he’s been infatuated with holds a rodeo, Kegan can’t see a way he can compete. Not until a mystical medicine hat stallion walks into his life. It’s not long before they are the talk, and mystery, of the rodeo. The only thing more daunting than keeping his identity secret is how Kegan is going to balance all this with his draw to the man of his dreams. Will Cole end up being his magical prince, or is Kegan going to find himself left in the dust?

Giles West's  Review of : Spurred On by Jon Keys

Where to start on this review?  That is the question.  “Spurred On” by Jon Keys is a retelling of the Cinderella story, but with a male in the lead and set in the land of cowboys.  Instead of a ball there is a rodeo.  And, there’s no need for a fairy godfather when there’s a “mystical medicine hat stallion” to help the hero.

First of all, I am a huge fan of fairy tales and revised or reimagined fairy tales (except for certain TV shows which seem more soap operaesque to me).  But I digress, back to the novel at hand.  I absolutely love Jon Keys’ fairy tale.  For the most part, it actually does read like a modern fairy tale without being hokey.  The author gives us a hero we can root for, as well as a great love interest.

But, there are a lot of problems with this book, most of which I don’t believe are because of the author.  I usually start a review talking about the cover and so I’ll start there.  I’m reminded of two movie reviewers on an old sketch comedy show who used to say “hated it”.  That pretty much sums up my feeling about the cover.  There is a problem with using models on covers.

The men in the novel are over the top, incredibly good-looking.  I know looks are subjective, but to me the models on the cover look nothing like the characters in the book.  That is distracting because while I do like to imagine the characters myself, the cover is there and quite frankly I don’t find either man remotely handsome (no offense to the models) or cowboy rugged.

The boots on the cover look great, and the original Cinderella is really all about the shoes anyway, isn’t it? (LOL).  The horse was such a big part of the story that I think instead of the men, it might’ve been nicer to have a horse and rider in the background and maybe a silhouette of a man in the foreground.  I know, I shouldn’t judge by “what if’s”, but hey—it’s my review.

Editing, or rather lack of editing, is a huge problem in this book, which I’ll address at the end of this review.  For now, I’ll focus on some of my favorite things about “Spurred On”.  The fairy tale inspirations are all over this novel without it ever seeming trite or silly.  I absolutely love the interactions between the lead character Kegan and the horse.  The horse has a real personality and character all his own—perfection.  All of the characters fit the story exceptionally well, without any missteps on the author’s part.

Brilliant idea Mr. Keys!  The whole story is original and inspired, yet harkens back to the original Cinderella with a nice almost reverential or respectful feel.  The elements are there, and one would know that without the author telling us, but Jon Keys is in there too in a witty and imaginative way.  He really has something new to add to the old tale and it’s not just because it’s now an m/m story.  Changing the setting works wonderfully, and believe it or not the cowboys and rodeo action do have a magic of their own.

Now for the bad.  And one thing I will say is that a gifted author like Jon Keys needs to find a publisher who knows what editing actually means.  Decadent Publishing does have editors on staff (trust me-I checked), but the first thing those editors need to do is look up the word “editor” in the dictionary.  Maybe the horse from the story could explain to the editors at Decadent Publishing what editing means, since clearly they have no idea whatsoever.

Yes, I’m going on a rant here for reasons which I will now state.  Even the information that went out to reviewers was filled with typos and misspellings.  When this title was sent out for review I had misgivings.  The story immediately drew me in, but the typos were evident from the first line.  Let me just give some examples.

In the summary of the story in front of the book there is this line:

“The only bright spot is a Cole, who’s admired from a distance.”

“A Cole?  This is a book featuring cowboys and horses, did they mean to say a colt or is the cowboy’s name Cole.  Cole is a cowboy in the story, so the “a” should clearly have been edited out of the summary saying what the book is about.  Then there's the first line of the book:

“Once upon a time… Isn’t that how all fairytales start?

First sentence and there are two mistakes.  It’s one sentence not two, so 'Isn’t' shouldn’t be capitalized.  And, according to Miriam-Webster 'Fairy tale' are two words not one.  Kegan’s best friend is named 'Alec' but at one point the name is spelled 'Alex.'  There is also some overusing of words, which a good editor should spot, since it’s their job to edit.  Yes, I’m harping but bad or non-existent editing is getting to be a major problem with books which I’ve been given to review.  And, before anyone asks, it’s easy to tell when an author has real talent and is good, and when the editor does her job poorly.  Even the best authors need editors.  A lot of times they get caught up in the story or characters and end up with typos or simple mistakes. That’s when the editor is “supposed” to come in and do their job of “editing”.  Where’s a magic horse when you need one?

Well, enough of that.  Would this book have generated a perfect score if it had perfect editing.  Probably not quite, but pretty darn close.

There is one thing that left me a bit perplexed because, to be honest, I wasn’t sure what I thought about it myself.  That’s the topic of sex in this book.  I’m not familiar with this publisher with the bad editing (yes, I’m rubbing it in-they deserve it for letting the author down), so I don’t know if their books are known for having a certain amount of sex or not.  The earlier parts of the book don’t have sex, then all of a sudden near the end—bam!  Now, being a male I can certainly appreciate hot man on man sex between cowboys.  Certainly there are more than a few female readers who appreciate it as well.  And the male couple are definitely extremely hot, to be blunt.  OK, OK, so there was hot sex—what’s the problem, you ask?

The problem is what your views would be on reading about Cinderella rimming Prince Charming.  On their wedding night mind you—so it is within the confines of the matrimonial bed.  Hmm… you maybe start to see where I’m a bit confused as to what I thought about this.  Don’t get me wrong, this is definitely an adult book right from the beginning.  It’s no child’s story, but there is a fairy tale sweetness and charm about it that makes me think twice about those hot, juicy love scenes near, and at, the end.  I haven’t really made my mind up about all of that.  On the one hand doing the sex scenes in a more fade to black way would retain the fairy tale feel.  On the other hand, it doesn’t pretend not to be an adult book.  Either way, readers will have to decide on their own about those scenes.  On a side note, there was some (just a bit) repetitive use of phrases in the love scenes—and I don’t mean the moans and groans.

At long last, here are my final thoughts on “Spurred On”.  The length of the story is perfect, and characters are endearing and fit the story well.  The story is such a creative rendition of the Cinderella fairy tale that it’s going to boost my rating up a star despite the horrendous editing job.  Someone at the publishing house isn’t doing their job or doesn’t know how to do their job.  Time to clean house, I say.  It’s very easy to lose readers, especially when you have mistakes in the summary of the book.

To author Jon keys, I don’t know you, but I loved the whole idea of this book.  It put a smile on my face.  Thank you.  And find a publisher with better editors, you deserve it.

Great story, fantastic characters, fun weekend read!  The story definitely pulls this rating up from what I thought would be three stars because of the lack of editing.

Jon Keys’s earliest memories revolve around books. Either read to him or making up stories based on the illustrations, these were places his active mind occupied. As he got older the selection expanded beyond Mother Goose and Dr. Suess to the world of westerns, science fiction and fantasy. His world filled with dragon riders, mind speaking horses and comic book heroes in hot uniforms.
A voracious reader for half a century, Jon recently began creating his own creations of fiction. The first writing was his attempt at showing rural characters in a more sympathetic light. Now he has moved into some of the writing he lost himself in for so many years…fantasy. Jon has worked as a ranch hand, teacher, computer tech, roughneck, designer, retail clerk, welder, artist, and, yes, pool boy; with interests ranging from kayaking and hunting to drawing and cooking, he uses this range of life experiences to create written works that draw the reader in and wrap them in a good story.