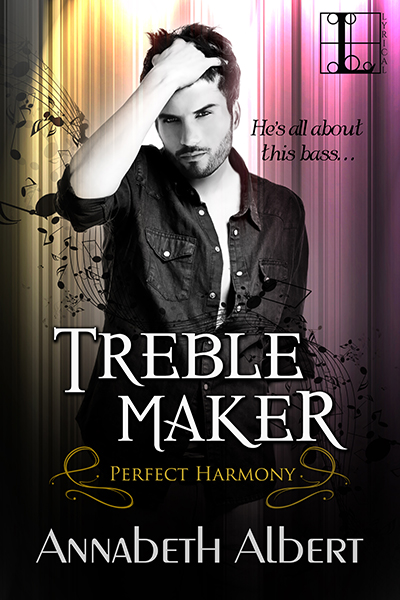 On Perfect Harmony, the ambitious competitors heat things up on stage and off…
Cody Rivers is determined to be a rock star, but couch-surfing between bar shows gets old fast. Joining an a cappella group for a new singing competition show could be his last chance at real fame—unless the college boy from the heart of the country messes it up for him. Lucas Norwood is everything gothy, glittery Cody is not—conservative, clean-cut, and virginal. But when a twist in the show forces them together, even the sweetest songs get steamy as the attraction between them lights up the stage. Lucas wants to take it slow, but Cody’s singing a different tune—and this time it may be a love song…

The bass singer was gay. Cody wiggled his hips in an exaggerated move that always got him company on dance floors, waited a beat, and ... there. Right on cue, the curly-haired singer gave him another sidelong glance.

A straight dude might grant Cody the occasional double take because, yeah, it was damn hard to ignore Cody's style of fabulousness. Today, for example, the style gods had smiled on him—his hair was the perfect combination of deliberate spikes and casual falls, the silver specks in his eyeliner complemented his studded leather belt, and his red skinny jeans showed off his ass. So when the bass’s double take had turned into something more like a quintuple take, Cody knew what those lingering glances meant. Knew it despite the fact that the bass looked fresh off the farm, all wholesome and rosy-cheeked and wearing a tie/sweater vest combo perfect for performing in a church choir.

Whatever the dude was, he was screwing up Cody’s big break. Twitchy farmer boy and the rest of his all-boy group had screwed up multiple run-throughs of the opening number for the new season of Perfect Harmony. No one would notice Cody’s singing if the other groups kept crashing into one another and losing the chorus. He’d worked damn hard to earn this solo, and he didn’t need farmer boy messing it up with his clodhopper feet that kept tripping over thin air.

One young man is determined to win in a reality singing show which is much like a mashup between AI and The Sing Off. Cody is not willing to compromise or take risks: he wants it all. Until Lucas Norwood comes in and threatens his determination. Complication: Cody likes Norwood and Norwood is kind of virginal in a farm boy sweet kind of way.

There are a few elements here that did not quite work out for me, like Norwood's virginal persona. I won't expand on that one, I just find it fairytale-like. Then there was their competitiveness which dominated most scenes. It kind of bothered me for their need to outshine the other barred my way into thinking they were going to have a future together. I guess I wanted the fairy tale to extend to their relationship and I did not quite catch on to it. Of course there were instances I just wanted to slap some of the biatchiness going on in the sidelines and offstage from the other characters and frankly distracted my quest for the romance to develop between Cody and Norwood. In short, the read dragged quite a bit and only did pick up in the last chapters which made it a longish read I did not expect from this type of plot. I guess I ask too much and if I am rambling, forgive me!

Much as the premise hooked my interest, it took me some time to get to finish this read without descending to skimming the many pages. Thankfully, there was enough of a good read and plot twist in this writing that made me continue and finally reach the end. That ending was kind of sweet, but was it the one I pictured it to be? I don't know. All I do know is that I love Annabeth's style of penning the word, it just did not quite hook me goofy for this one. That said, I would still recommend this read, it is good and entertaining and kind of quirky in some instances.

Annabeth Albert grew up sneaking romance novels under the bed covers. Now, she devours all subgenres of romance out in the open—no flashlights required! When she’s not adding to her keeper shelf, she’s a multi-published Pacific Northwest romance writer.Emotionally complex, sexy, and funny stories are her favorites both to read and to write. Annabeth loves finding happy endings for a variety of pairings and is a passionate gay rights supporter.  In between searching out dark heroes to redeem, she works a rewarding day job and wrangles two toddlers.Represented by Saritza Hernandez of the Corvisiero Literary Agency