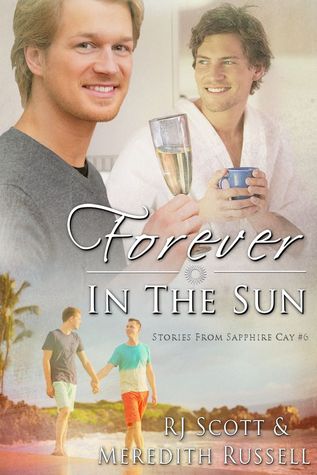 
Will Lucas and Dylan’s happy ever after be able to weather the storm that is heading for Sapphire Cay? Join characters old and new as we celebrate Dylan and Lucas’s wedding and delve into the history of Sapphire Cay.
Connor and Shaun are directly related to Peter and Alfie, a couple whose clandestine lover affair was overshadowed by old prejudices and a world war. Shaun Jamieson is a writer, a romantic and needs to pen the story of the affair’s final secrets; Connor French’s family wants to stop Shaun. When the two men step onto the sands of Sapphire Cay, they find more than just the secrets of an old love. They find hope and comfort in each other. But with the past hanging over them, can they ever have what Peter and Alfie could not? Or are they just as ill-fated as their ancestors?
With feuding families, unearthed secrets, and a violent storm that threatens the Cay, will the idyllic island with her cast of characters make it through unscathed? It’s time for the circle to close on the story of Sapphire Cay, and on the men who have lived and found love on her beaches.

Forever in the Sun have two stories in it. One is the wedding of Dylan and Lucas. The wedding where everything that could go wrong did and hiding what went wrong from the affected people took a lot of stealth. It was short, sweet and lots of good fun and giggling throughout.

The other is how the mystery of the love letters between Peter and Alfie  finally gets its day in the sun. The feuding was stupid, but then again, what feud is not? Also, the angst between Connor and Shaun is purely a matter of miscommunication. Connor is trying to be the good son, or in this case, nephew while Shaun is just trying to get the truth out. Why not? What is the shame of two men loving each other when they were still alive? So someone does not get hurt? Again, sweetly done and gives the reader a light feeling of joy. Especially around the parts where the letters and sketches finally tell their all.

Two stories, one that makes you laugh, the other makes us smile with tears in our eyes. Both are sweetly written. Both worth the while to sleep and dream over later.

Note: eARC copy provided by authors for an honest review.