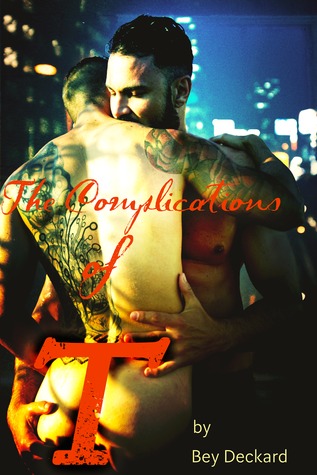 Stuart Leandro knows he’s washed up, both on the big screen, and in his marriage. Then, when things take an even bigger turn for the worse one night, he winds up blind drunk and lost in a foreign city.
Thankfully, someone’s there to rescue him before his face ends up plastered all over the tabloids.
Wary of the motives of the reclusive stranger who brings the fading star into the quiet shelter of a hip but isolated loft, Stuart nonetheless can't deny his curiosity… Or his attraction. Tim is unlike anyone the actor has ever met, but underneath the mystery and quiet attempts at invisibility, Stuart discovers someone whose life has been intertwined with his own for years.
Neither could have predicted that Tim's act of kindness would lead to one of the most intense encounters of their lives—but, are they willing to weather the media storm their extraordinary relationship will cause?

The Complications of T is a title that plays on two words: Tim and Transgender. Tim is a trans and had gone through a complete transition so is more sure of himself and in what he wants and needs. He wants and needs Stuart but there is a but.

Stuart is a great actor but just like a lot of actors, fall victim to the need of money rather than craft. His movies are not directed nor written well. Sound familiar? I mean, I enjoy those films that make no sense yet get my heart pumping because of the action sequences and flash, boom, bangs. Thing is, Stuart thinks he is blasted left, right and center by a certain movie reviewer. Guess who that turns out to be?

This is a novelette of sixteen thousand or so words and in this short story, we see Stuart connect with Tim and himself. In five short days, make that six, he gets to finally face facts and may just now find the courage to get over himself. What he needs is a break, from Tim, get back on the right path and cultivate his craft.

Note: ARC provided by author on the very last minute for an honest review published, hopefully, on release day. Thankfully, it's a Deckard so here it is.

Happy Release Day, Bey, and please. Send the next one over?

Posted by multitaskingmomma at 6:59 AM