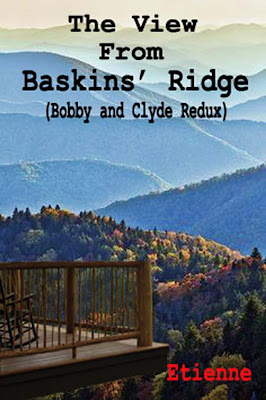 After several years in Atlanta, Bobby and Carlyle (formerly Clyde) have returned to their beloved Blue Ridge to join the family law firm of Baskins and Baskins, but a few surprises await them.
Workmen building a driveway to their new home discover an abandoned moonshine still, and a tin shack containing two skeletons, so they have a forty-year-old mystery to solve. A few months later, their involvement in exposing graft in the local sheriff’s office, results in an attempt on their lives.
But their greatest challenge occurs when the real Carlyle Baskins turns up, and Bobby and Carlyle wonder if their lives will ever be the same again.

When I got the draft for this ARC, I prepared myself for a good read with loose ends that may need to be ironed out. The usual stuff one would expect from an ARC. Surprisingly, this particular work of Etienne read like a retail copy.

This book opens a few years after Clyde and Bobby have had their required time in Atlanta. Carlyle, (a.k.a. Clyde) is about to take his board exams while Bobby is ready to retire from the city lifestyle even if his career is at that point many only dreamed of. Both ready to turn from the city, they look to home and Blue Ridge. Their lives passing daily in an almost humdrum way and the only excitement is looking over plans for their new home overlooking a ridge with orchards either side of the view. It's a nice boring life that is, until a worker stumbles into two skeletons from what was obviously a moonshine shack. It should have been an open and shut case but instead, they stumble into a troubled sheriff's office and the real Carlyle is back. As their day to day experiences become more interesting every day, both Bobby and Carlyle begin to wonder the kind of future they are about to face.

Set in the days when gay couples were sneered at and beaten up, Bobby and Carlyle live the life as close cousins who choose to live and work together. The support of their immediate family and good friends make them realize they are more lucky than most. When they see they could spread the love around, they don't think twice and face a new life.

The story of Bobby and Carlyle is familiar in a way. It reminds me strongly of the relationship between George and Mike of the Avondale series who are very strong and masculine.  They are never open to public displays of affection as they knew they had to protect themselves from bigotry of the days but never fail to speak and act their love with each other in the privacy of their bedroom.

No, this is not a romance, far from it but there is romance in private between the men. This is more a story of how they are living their lives and how they face up to responsibilities. They make decisions together as well as support each other in every way possible. They are partners. No, there's no romance. Just two men loving each other.

eARC Review: Bobby and Clyde by Etienne
Posted by multitaskingmomma at 7:45 AM