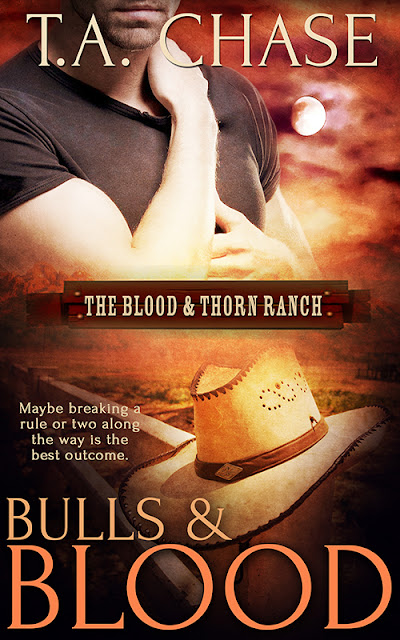 Breaking the rules has never been Wesley’s way…until he meets Mino.Rule Number Two that the Thorn brothers live by is that employees of the ranch are off-limits. Wesley has always followed that rule, never stepping out of his comfort zone to do more than talk to one of the cowhands that help run his family’s ranch. Being a vampire makes it easier, since he doesn’t go out during the day.Mino’s been interested in the youngest Thorn brother since he began working at The Blood & Thorn Ranch. It’s those stupid rules that hold him back from making the first move. Well, those and the fact that Wesley could kill him in a blink of his eye. Being human in a world of supernatural creatures makes living difficult, since he’s considered prey.These two males, from different species and societies, must find a way to meet in the middle of their worlds if they have a chance at love. General Release Date: 18th August 2015

Like the sound of Bulls and Blood? Buy it here.
Review by: multitaskingmomma
My Rating: 4 of 5 Stars

I love reading about vampires and cowboys and have done so separately, never together in one story. Bulls and Blood is an alternate universe paranormal romance where the vampires finally decided to reveal themselves to the world and immediately showed the puny humans they were a race to contend with and never to subdue. They are a law unto themselves and powerful. The other supernaturals also came out of the wood works and soon the world as the humans knew it, was never the same again. One of the more powerful vampire families are the Thorns. Turned centuries earlier by one Master, the seven unrelated men from all walks of life became bonded brothers. They moved to America for some reason or other and there established their ranch where the rich vampires came to hunt prey but not kill them. It is all for fun, you see. Of course, there are rules to be followed and one brother, Wesley, the youngest but second most powerful, follow the rules to the letter. Until Mino.

Mino is a human but finds himself strangely attracted to the quiet accountant Wesley Thorn. Although a vampire, Mino is strangely unafraid of the manvamp and finally realizes, after five years, he either makes a move or die pining. He moves and Wesley reacts. In the best way possible.

On a side note, the other characters are introduced in this first book of The Blood & Thorn Ranch series. One in particular, a Thorn brother I won't reveal, is truly most intriguing and leaves me with a sense of anticipation for when it's his turn to get his story told.

This is the first book of the series so does fall victim to the usual first-of-a-series-blues: it leaves the reader hanging on loose ends and questions unanswered. On the other hand, this is a different sort of vampire and cowboy story which makes my curiosity meter ping wildly.

I would recommend this to vampire and cowboy lovers out there who want a different sort of story in an otherwise very familiar world of the paranormal M/M romance.

Note: Copy provided by Pride Publishing in exchange for an honest review.

A Word From Guest Blogger: T.A. Chase
Hello everyone. Thanks so much for having me here today to talk about my new book, Bulls and Blood. It’s the first in a new paranormal series, The Blood & Thorn Ranch.
The idea came to me from a picture posted to spark book ideas. I looked at it then the actual tag line for the series hit me. “Welcome to the Blood & Thorn Ranch, where the wealthy come to hunt.” Perfect. Cowboys and vampires. Who could resist?
There will be six books, one for each Thorn brother. Bulls and Blood is Wesley’s story. He’s the youngest of the brothers, but he’s the one in charge of their finances. Wesley’s not really interested in the cattle side of the ranch—or the hunt side either. Both make the family money, which is the important thing to him.
Mino is a human cowboy who works for Loman, the Thorn brother in charge of the cattle half of the ranch. Now, he’s always had his eye on Wesley, but the Thorns have a rule about messing with the employees. All of them are off-limits, not only to the Thorns, but to the vampires who come to hunt on their property.
The Thorns have six rules and each book will focus on one of the rules. Obviously, Bulls and Blood deals with the rule about family having relations with employees. Of course, they have other issues to deal with as well from outside influences.
The series addresses the topic that maybe some rules are meant to broken when it comes to love and life. Each one of the brothers finds himself caught between doing what he’s always done and doing something new. And for a vampire who has been alive for centuries, changing his ways can be difficult.
Yet love can make a man—or vampire—question everything he knows. Wesley has to make a choice when he opens his eyes to how Mino feels about him. I hope you check out what choice he makes and how he deals with it.
Thank you for having me here. I thought I’d share a little excerpt from Bulls and Blood. 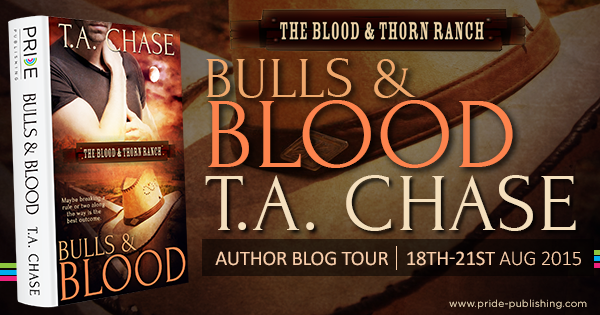 Excerpt from Bulls and Blood
T.A. Chase
Copyright 2015
Loman snorted. “It’s that damn bull I ordered. Turns out he’s a damn shifter. Can you fucking believe it? That’s what I get for buying cattle sight unseen.”


“I have all the information about the seller. I’ll gather everything and send it to the Council’s investigators. No one should be selling shifters like that.” Wesley moved toward the closet where they kept all the emergency first-aid kits for the different beings on the ranch. “It annoys me when idiots do something like that. It makes it so much harder for us.”


“Seriously? You know how hypocritical you sound. We make most of our money leading rich vampires on hunts. How is that not the same as selling them?”


Loman had a point, but Wesley didn’t see it like that. “Yes, we allow our clients to hunt shifters. They’re only allowed to drink from them, not kill or injure them in any way. We take very good care of the game and we only use them once.”


Wesley took the kit out then headed from his office toward the front of the house. “Either way, it’s illegal for anyone to sell shifters, so I’m going to report it.”


Then get our own private detective looking for everyone involved in this. Once Fox finds them, I’ll take care of their punishments. No way am I going to allow the Council to mete out justice. Wesley was powerful, far more than all of the vampires that called the Americas home. It made him the perfect choice for the ranch’s enforcer and he did his job without remorse. Why feel guilty about ending someone’s life when they knew what would happen if they disregarded the rules? Hell, even when there hadn’t been rules and they’d been living hand to mouth while trying to expand the ranch, he’d had no problem killing to survive.


He opened the door when Mino knocked. The young cowboy flashed a small smile at him while taking the box Wesley held out. He’s not that young for a human. He just seems that way since I’m over four hundred years old. Nodding, Wesley tried not to let his gaze drop below Mino’s chin, not wanting any of the interest he felt for the human to show on his face.

Enter Pride Publishing’s August blog tour competition for the chance to win an eBook of your choice (not including boxsets or anthologies).