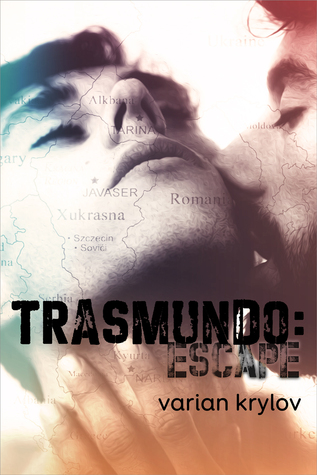 
Strange, quiet Luka doesn't live in this world; long ago he took refuge in his art, escaping into surreal mindscapes inspired by his favorite painters. In the beautifully monstrous realms of his imagination, he is safe from the pain of his losses: his family, his friends, his hope.
Until war breaks out, and he is forced to flee the only home he's known since he was thirteen.
Captured by an enemy soldier, young Luka is marched across brutal terrain, toward a fate known only by the bearded menace holding him prisoner. Quick with a knife, tireless and strong, Tarik guards the purpose of his mission as he takes Luka deeper and deeper into enemy territory.
When the soldier discovers the painful secret he has been hiding since childhood, Luka fears he is about to endure a new kind of cruelty, worse than being abandoned, ostracized or beaten. Or is it possible the soldier holding Luka prisoner is the one person who isn't afraid of the truth behind Luka's silence and lies?

Set in an alternate universe, Trasmundo: Escape is the story of Luka who was labelled and thrown away much like the Jews were in WWII during the dark times ruled by the Nazis. In this world, Luka struggles to survive and almost did not make it but for the unexpected helping hand of an unknown old man. Was he dreaming? Was it wishful thinking? Was it delusion? Or was it some sort of divine intervention? I don't know, neither does Luka really. Point is, he got away but then stumbled into the path of a wayward, bearded soldier who is tough, rough and threatened to kill him. Fortunately, the soldier is more than just what his uniform portrays him to be and ends up a good Samaritan instead. Their journey thus begins and both go through periods of distrust that soon grew to something else. Their story is not ended, we still have a ways to go to find out if they are going to make it through or not. Point is, this story is incredible in its penning.

When I grow up, I want to have Varian Krylov's talent for the written word. When I grow older, I want to be able to have at least half her talent in photography and Bey Deckard's talent in mashing up images and come out with a cover that is simply, original and perfect.

The first time I read Varian Krylov, I felt inadequate in every sense because she manages to just wrap the readers in a cocoon of emotional images it is hard not to drown in her tale. The way she tells the story, the way she makes the characters leap out of the pages, it is strange she is not picked up by a 'reputable' publishing house and given a footing in the 'published' author world. As it is, I am just thankful I have been given the chance to read her stories.

Posted by multitaskingmomma at 2:50 AM