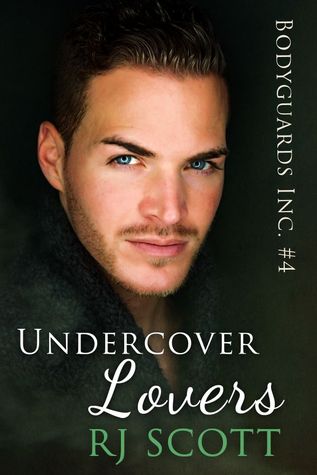 Book 4 in the Bodyguards Inc series: Out July 31st
BUYLINKS: http://rjscottauthor.blogspot.com/2015/01/undercover-lovers.html
Book 1 - Bodyguard to a Sex God
Book 2 - The Ex Factor
Book 3 - Max and the Prince

Even if Ross and Kyle make it out of this alive, will the secrets in Kyle's heart stay safe?

Kyle gets caught up in a case that is entirely unrelated to Bodyguards Inc. Not only does he abruptly need time off, but he has to have absolute trust and complete support from Ross without being able to tell Ross a thing.

CIA Agent Stefan Mortimer needs Kyle's help with a case of a geneticist and a missing formula. Trouble is being led right to Kyle’s door, endangering the life of the team he has built and the man that he loves.

Going undercover, with Ross as his husband, is the worst kind of torture in so many ways, but it is the only answer. Kyle and Ross may well live through this but Kyle is convinced his heart won't survive.

Finally! We have Ross and Kyle's story which had teased us from the very beginning. Clearly, it was about time they got their HEA. But did they really?

Kyle is the boss of Bodyguards, Inc and Ross is his easy to tease PA. Kyle is unreachable and kind of aloof. Ross is easy to react especially when his stapelers are concerned. When it is Kyle's time to go back on the field, it sets him to wonder if this was his time to get the happiness the rest of his team seem to fall into when out on a job.

Stefan Mortimer, former friend and teammate to an unnamed special force in the US, calls and Kyle has no choice but to do as bid. His cover: honeymoon with husband in a nice little hotel. His mission: guard a geneticist without him realizing it and make sure to keep him alive.

Ross is definitely up to the task so even if he could not be an Ethan or a James, he can definitely act the honeymoon husband to his long time crush, Kyle. How he gets information is another matter. How he keeps safe, well, that makes Kyle insane.

This was a fun fun read and I finished this in one go. The pace was fast and so made the read quite light. It is a nice installment to the series and finally got my curiousity satisfied. Now, the question is, how long is it before job and personal lives intervene with each other. For now, everything is fine but the way I read it, there is more to these men than meets the eye. As for Stefan, we get him next installment.

Excerpt
Chapter 1
As soon as Max left the room, Kyle reached for the phone. He hesitated, with his fingers an inch from the handset, and listened to its beep indicating a call waiting.
Stefan Mortimer was at the other end of the call. That was a name Kyle hadn’t expected to hear again for a very long time, and the fact the man had contacted Kyle didn’t bode well. Especially considering Kyle thought, his and Stefan’s association had been put to bed a long time ago. A twinge of guilt accompanied the memories. He’d been the one told to leave, he was the one who’d had no choice but to go, but leaving Stefan behind had never sat well with him.
A combination of anxiety and fear fluttered in his chest as he picked up the handset and pressed the button to connect.
Only to be offered a line that was dead.
“Stefan?” Kyle said to the empty air. For a second he held the receiver to his ear, then, very deliberately, replaced the handset in the cradle. Kyle rested his head on his hands, scrubbing his face to clear the tension. When the door opened, he knew it was Ross. He always knew when it was Ross.
“He got cut off,” Ross announced.
Kyle nodded. “So I see.”
Ross sat down in the visitor’s chair directly opposite. “Is he a new client? Should I start a file for him?”
“No, an old….” How could he describe Stefan? Ex-lover, partner, old friend? “Someone I knew.”
Ross eased forward in his chair, his gray eyes bright with interest. “Knew? Like you used your experience as a spy to know?” he asked in his usual inquisitive tone.
“From before,” Kyle said. He was deliberately vague. As he was every time anyone at Bodyguards Inc. skirted near what Kyle used to do for a living. Ross loved to tease that Kyle had been CIA black ops. To be honest, Ross wasn’t that far from the truth—but that had been a long time ago now.
Giveaway
Competition to win $15 Amazon/Are giftcard, and 2 further prizes of RJ Scott e-books – closes 8th August at 00:01 GMT (London)
a Rafflecopter giveaway