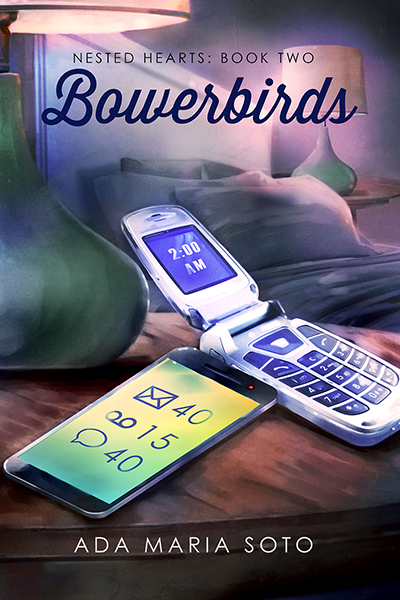 Two very different men have a chance at happiness, but only if they can let go of their painful pasts and allow love to take precedence. After spending his teens and twenties raising his son, James Maron is now dating Gabriel Juarez, the wealthy and sophisticated CFO of the TechPrim technology empire. But after a life of proudly holding his head above the poverty line with the ethos of work, priorities, responsibility, and thrift, he is not looking for a Sugar Daddy, he does not need to be rescued, and Gabe’s wealth is as terrifying as feeling love for the first time.
Gabe has never been good at balancing his high pressure job with his relationships. Money usually clears most of the bumps, and when a boyfriend walks away, Gabe figures it’s for a good reason. But James isn’t like other boyfriends. He doesn’t want Gabe’s money for one, and if Gabe wants to keep his relationship together he will have to finally face the ghosts of his own past and reconsider his priorities.

Today I’m very lucky to be interviewing Ada Maria Soto author of Bowerbirds.  Hi Ada, thank you for agreeing to this interview. Tell us a little about yourself, your background, and your current book.

Hi, it's nice to be here.  I'm Ada.  I'm a born and raised Californian who has been living in New Zealand for the last decade.  I studied theater, film, and television and worked a little in each.  Currently I'm an almost full time mom to a two year old and I write when I can.  In my tiny scraps of free time I do things like knit and make jam.  I'm also a sports fan but I'm not great at picking winning teams to support.

Bowerbirds picks up pretty much right where Empty Nests left off.  James and Gabe are properly together now but they still come from very different worlds each of which brings its own baggage.  Gabe is very much a fixer and wants to 'fix' James's life to make up for how busy he is with work.  James is very proud and does not want or need a sugar daddy to fix anything.  He's also terrified at the very idea of being in love since it's something he's never done before.

Was there a basis for you story? A previous experience or something else?

There wasn't an exact basis for my story though some bits and pieces of my dad came out in James.  He wasn't a single father but he was a stay at home dad in the early 80's.  He got a lot of grief from other guys and didn't have a lot of experience with small children.  I like to think he muddled through pretty well.

What skills do you think a writer needs?

The ability to tell a story is the most important thing a writer needs.  There are useful things like an ability to spell and knowing where to put a comma but if the story is truly good you can find an editor to help out with that.


What for you is the perfect book hero?

I prefer the flawed hero.  I never liked Prince Charming or what's his name from Cinderella. There was nothing interesting about them.  I love Sam Vimes from the Discworld books.  He starts out as an alcoholic watchman in a corrupt watch, with no respect, living in poverty because he gives his pay to the widows and orphans of other watchmen, and even in that state he tries to arrest a dragon on murder charges.  I think Nietzsche was a bit of a dick who spewed a lot of rubbish but the truest thing he ever said was 'when you look into an abyss, the abyss also looks into you.'.  Heroes who have looked into the abyss and walked away with a piece of it still in them are far better to read than the ones who have never even glanced at darkness.


Is there anything you find particularly challenging in your writing?

Before Empty Nests came out I would have said no.  It's a sweet little low drama romance. Now…  Shortly after I got my print copy of Empty Nests I took it to my local romance writers meeting to show off.  It's a very supportive group and we're always glad to hear when other people get contracts or have their books come out. I handed it over to a couple of other writers who wanted to look at it and of course they flipped it over to read the blurb and were quite surprised that it was about two men.  They weren't negative about it had just never occurred to them.  I answered a few questions they had and even managed to do it without total sarcasm.  One said she didn't think it would be to her tastes but not everything is to everyone's tastes.  I think it might have been a bit of a generational gap since these were slightly older women but it was an odd/interesting experience to have.


Tell us about your favorite childhood book.

Book? As in one?  That's not going to happen.  Favorite Star Trek novels, since I read a lot of those, How Much Just For The Planet, Ishmael, The Three Minute Universe, The Tears of the Singers.  Favorite fantasy novels were the Belgariad and Mallorean series.  Classic Science Fiction was The Illustrated Man and The Martian Chronicles.  As far as more 'proper' literature went I loved The Secret Garden.  It was probably the only 'girl' book I ever managed to get through as a kid.

Bowerbirds is the second installment to the ongoing love story between a billionaire and a blue collar lover. As was quite evident in the first book, James is still having a bit of a hard time comprehending he is, in fact, in a relationship with a man openly. I think he is having more problems with the fact he is not or never is going to be as successful or as rich as Gabe would ever be. This part is a bit too close to real life for many have I seen a partner drift away because of their insecurities. Now, is James going to be allowed to wallow in his self-made misery or will Gabe man up and demand he be a part of James' life?

This is a fun read, not quite as fun as the first book. I guess it is because we have reached the peak of the developing relationship and I am a bit anxious for the HEA. Right now, there is no HEA, there is an HFN but the HEA is just round the corner. Just not in this book. I should not gripe, I know this is a trilogy and will get the ever after I keep hoping for once that book is out. Until then, we all have to contend with James growing up. He is kind of stunted, psychologically, trapped in the day and age he became a father. He is just getting out into the world and his son could never be happier than seeing his father finally get his teen-age dreams fulfilled. Is it Gabe or not? It has to be. If not, well.... I won't be happy for sure but the author will not be that cruel and no, there is no other man hinted on here. Sorry, rambling, but I really want that third book now. Especially as Gabe did something long coming and James is finally smiling out in the open and ready for the next step. Whatever that next step is going to be.

Note: Bower Birds CAN be read as a standalone, however, it is best to read the first book to find out how Gabe and James met.

FOR THE millionth time, a load of baseball gear left by the apartment door nearly sent James tumbling. It was one of the very few things he would not miss when Dylan left for college. He checked his watch and saw it was pushing five in the afternoon. He could technically still make it to the laundromat and get a couple of loads through, but the place filled up quick after five and it became difficult to get the good machines. Ada Maria Soto

Dylan came out of his room, his hair sticking up at odd angles from his postpractice shower. “Hey, Dad. I was starting to worry. How did the concert go last night?”

As a last-second surprise, Gabe had gotten them tickets to the California Honeydrops at the Fillmore. After a couple glasses of wine, Gabe had even talked him into dancing. “It was good. Stop leaving your gear by the door.”

“Good?” Dylan tried for a scolding look, but there was too much humor in his eyes. “No, just good does not end with you coming home… um… twenty-one hours later than expected.”

Dylan had been nagging him about getting a social life and a boyfriend for years, but James hadn’t realized he would become so nosy about it once it happened.

You’d think he was the parent here. “The concert ran a bit late, and we got a room in the city.” Then they decided not to leave that room until a few hours after the normal checkout time, followed by a late lunch.

“Does it matter?” James asked as he picked up Dylan’s baseball gear.

“What?” James froze for a second as he tucked a baseball bat under his arm.

Dylan headed for the kitchen and rummaged around the fridge. “I mean, a guy with a steady job is a good thing these days, but one who can score you concert tickets and hotel suites on a whim is a pretty sweet deal.” He pulled an apple from the veggie bin.

James felt his phone buzz in his pocket. He juggled around the gear until he could pull it out and saw he had missed a call ten minutes earlier.

“Hi. It’s me. Stuck in traffic. Seriously, traffic on a Sunday. I think the Niners are playing or something. Don’t worry, I’m on the hands-free setup. Just wanted to say I had a really nice time this weekend. The concert was a lot of fun. The other activities were fun too. Don’t know how busy I’m going to be this week, but I’d love to be able to come up there for lunch or dinner. Catch a movie or something. Oh, Tamyra left me nine messages, the last one informing me that I’m getting ‘Genie in a Bottle’ for my new ringtone. I’m hoping I can pass it off as a postmodern ironic statement or something. Oh look. Traffic is moving. Well, I’ll talk to you later. Drive carefully. Bye.” Bowerbirds

James kept the phone to his ear even after the message ended. Dylan stared at him, one eyebrow raised. He had a funny feeling Dylan practiced that look in the mirror. James hung up the phone. “You know what? My love life is none of your business.”

ADA MARIA SOTO is a born and raised Californian Mexican-American currently living as an expat in the South Pacific with her toddler and partner. She has studied and worked in theater, film, and television with all the usual crummy side jobs of a struggling artist. She has dysgraphia and phonological dyslexia but refuses to let that slow down her writing. She is a sports fan dedicated to the Oakland A’s, San Jose Sharks, Auckland Blues, USA Eagles, New Zealand All Blacks, New Zealand Black Caps, and the Chennai Super Kings. She loves to hear from her fans, or really anyone who has read her work.

Posted by multitaskingmomma at 2:18 AM