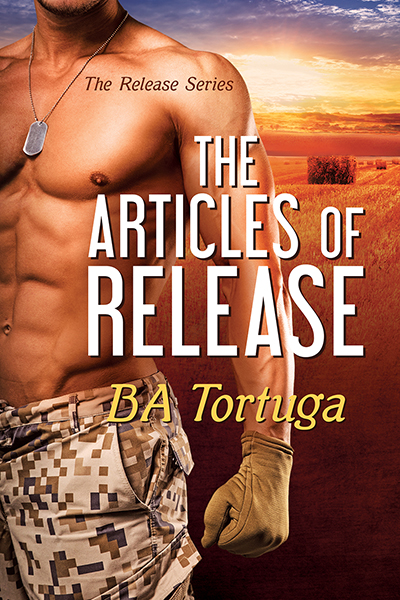 Just released from the military, wounded warrior Eric Tremaine is trying to put his life back together like the doctors reassembled his shattered leg. He’s a man with no home, since his Louisiana family rejected him, so Eric winds up in Texas with his old Army buddy, Adam Winchester, and his lover, Sage.When Eric decides to stop sitting on his ass feeling sorry for himself, he is introduced to trainer Troy Daniels, who lost both his legs in a teenage accident. Troy knows what it’s like to feel as if your body is your enemy. While Eric and Troy have a bumpy start, they soon find enough common ground to make a friendship, if not more. But taking it to the next level means finding out what they have to offer each other, and the world, before they can trust that the love they find together won't cause more pain than pleasure.

“Want to join me?”
“Thanks, but I’ll stand. Sitting’s a pain in the ass.”
Eric blinked. That was a new one. “Uh, did I piss you off? I didn’t mean to.”
“Huh? No. No, you’re totally good. Completely. How’s your falafel?”
He hadn’t even tasted it. What was it about this guy that got under his skin? “It’s fine. What, the trainer doesn’t want to be seen with the cripple or something?”
“Pardon me?” The asshole actually looked around, like he didn’t know what Eric was talking about.
“Well, it’s not like I wear a T-shirt, but the heavy limp is kind of a giveaway.” He could do sarcasm too.
“What the hell are you going on about, man?”
“I want to know why you would rather stand and hold your food than sit with me!” That came out loud enough to draw few stares, and Eric kinda felt as if he was having an out-of-body experience.
Troy’s cheeks went a dark red, and the man moved over and set his food down. “Sorry, man.”
Sage and Win were heading over, and Troy sat at the end of the table, sitting awkwardly at the edge, legs barely tucked under.
Eric tried to breathe, to calm the fuck down, but his fury hit him about the time Sage stumbled into the table and Troy damn near went ass over teakettle onto the grass. That was it. Seriously? Seriously, this motherfucker was going to treat him like a goddamn leper because he limped? Gonna fall onto the ground rather than sit with the crip like a decent human being? Fuck, the bastard was probably one of those liberal hippie types that thought every soldier was a fucking murderer and deserved what he got.
He’d just been doing his job, goddamn it!
“Jesus, just go, would you? Some trainer you are, being ashamed of a guy with a bad leg!”
“Huh?”
“Don’t you fucking pretend that you don’t know what I’m talking about!”
“What the hell?” That was Sage, who always managed to look vaguely confused, which pissed him off too. What? Did falling in love give you the magical ability to live in fucking lala land? Huh? “What happened?”
“Just fuck off.” He wasn’t sure who he was aiming the snarl at.
“What the fuck is wrong with you?” Troy was looking at him like he had two heads and neither one of them were speaking English.
“What’s wrong with me? I’m sick of people humoring me and pretending that it doesn’t matter that half my leg is missing when they’re grossed out by it.” Eric kinda lost his shit, right there, slamming his hands on the table.
“It’s not missing.” The words from Troy were flat, dead still somehow, and didn’t really make sense.
“What?”
Troy got up, stood like he was setting himself, then carefully pulled up the legs of his jeans, exposing metal rods that disappeared into the motorcycle boots. “This is what missing looks like, just sayin’.”

One would think, given the blurb, this would be a story full of angst and insecurities. That it would be a tear-jerker and I would have finished one whole box of tissues by the time the book ended. What I got was a light read, believe it or not, one full of surprises, and thankfully, full of laughter. Serving as topping for this particular cake, its uber sweet and endearing it made the heart thump and scream yay! Fairy Tale!

Then again, this is far from a fairy tale.

There are two disabled main characters here. One is a double amputee which does not negate his uber sexiness in any way, and the other just had had two knee caps replaced and is going through the painful and frustrating process of physical therapy.

Troy lost both legs but not his sense of humor nor his self- esteem. He has a joy for life (can't speak French sorry folks) which can be quite contagious.

Eric may have both legs and two kneecaps replaced but he is a sensitive idiot who is as lovable as lovable could be. His self-esteem is a tad sensitive and sometimes too tender, but its okay, it does not limit his sexiness either.

When Troy and Eric take their tentative steps to romanticdome, we see two men who only saw themselves as men. We see two individuals who fell for each other, not what each other looked liked (though it does help they are incredibly sexy men). We see how one man's love for life finally saturates into the starving heart of another.

Am I getting waxy poetic? Well, forgive me, but this is wax poetic worthy and, yes... I do recommend this read to one and all. It leaves readers a smile that won't back down.

Note: Read further. There's a bonus from the author. Yeah!

Texan to the bone and an unrepentant Daddy's Girl, BA Tortuga spends her days with her basset hounds, getting tattooed, texting her sisters, and eating Mexican food. When she's not doing that, she's writing. She spends her days off watching rodeo, knitting and surfing porn sites in the name of research. BA's personal saviors include her wife (still amazing to say that), Julia Talbot, her best friend, Sean Michael, and coffee. Lots of coffee. Really good coffee.Having written everything from fist-fighting rednecks to hard-core cowboys to werewolves, BA does her damnedest to tell the stories of her heart, which was raised in Northeast Texas, but has gone to the high desert mountains and fallen in love. With books ranging from hard-hitting GLBT romance, to fiery menages, to the most traditional of love stories, BA refuses to be pigeon-holed by anyone but the voices in her head.

Hi BA, thank you for agreeing to this interview. Tell us a little about yourself, your background, and your current book.
Hey y’all! I’m BA Tortuga, resident redneck. I’m madly in love with my wife, Julia, I’m a romance writer, and I’m an unrepentant believer in happy endings. I’ve been publishing for more than fifteen years and I write cowboys of every kind.
The Articles of Release is the story of Eric Tremaine, a soldier that was wounded overseas and is in the midst of a medical discharge. He’s depressed, worried and alone, and when he calls his old Army buddy, Adam Winchester, he’s grateful that Sage and Win have a guestroom to offer him. When he meets personal trainer, Eric, who has challenges of his own, he discovers that maybe he’s not done living his life.
Say something to your fans.
Oh, good lord and butter, is there anything but thank you? Thank y’all for everything – for the love, for the encouragement, for the friendship. Thank you for the notes and the hugs and the fact that y’all have my back.
I couldn’t do this without all y’all. True story.