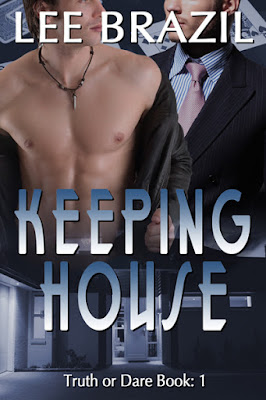 Mischa knows his brothers are up to something. He doesn't realize it will lead him to Donovan Holloway and change his carefree lifestyle forever.Having grown up in a free-love hippie commune taking care of the parents who should have been taking care of him, Donovan Holloway, advertising executive, newly made vice president of the company where he’s worked for twenty years, has come a long way. He’s worked hard to put himself through school and achieve the American dream. All he’s ever wanted is a normal family life—house in the suburbs, two cars, two kids, a shaggy dog. A family to come home to, to care for, to care for him has been his dream since he was a small boy.Green-eyed, liberally pierced, black-haired, Mohawk-wearing spoiled youngest son of a Hollywood producer and his actress wife, Mischa Blake has made a terrible mistake. In a fit of childish pique, he’s accepted a dare from his older brothers. The dare? Live on his own, supporting himself completely, for a year without accessing his trust fund. No problem. Except Mischa has never worked a day in his life, hasn’t finished college, and has absolutely no skills to bring to the table.When he sees Donovan’s ad for a housekeeper/gardener, he has nothing to lose by applying, because really…how hard can it be?

Donovan Holloway flung the heavy oak front door of his new dream home open with a thud. He peered out at the extremely tardy final interviewee for the position of housekeeper and groaned inwardly. The person on the other side of the door was not the one he'd been expecting.
"Yes?" He didn't have time for neighborhood boys selling magazines, cookies, or candy bars, even if they were sexy as hell. The person at the door might, might, have been seventeen. He should just shut the door and hope the kid went away. On second glance, shutting the door on temptation incarnate seemed like a damn good idea.
Wearing a tight black T-shirt, black skinny jeans, and black skate shoes, his visitor carried a skateboard under one arm and a black backpack hung off the other. His head was shaved on both sides leaving a strip down the center that was ink-black and, despite the rain, stood in four-inch porcupine spikes. He was pale, eyes red-rimmed, and literally drenched. Damn. That wet look sure was effective. Pervert! He snarled at himself. Note to self— get out of the office and get laid this weekend.
Donovan stepped back, prepared to slam the door, but something sad in those green eyes gave him pause. "Hey, are you all right? Do you need help?" He scanned the quiet neighborhood, looking for a reason the kid might be knocking on his door, envisioning gangs of hoodlums stalking the as yet silent boy through upscale neighborhoods.
He shuddered and then swallowed audibly before speaking. "I'm Mischa Blake."
Donovan stared uncomprehending.
"Mikhail?" Deep green eyes stared at Donovan expectantly. When no response was forthcoming, he added, "Michael? Blake? I have an interview?"
Donovan shoved his hand into the pocket of his trousers and pulled out a pink phone slip from his secretary. M. Blake was his sixth scheduled interview for the position of housekeeper/cook/gardener.
The first applicant, a beady-eyed battle-axe, had taken one look around his yard and at the clutter in his house yet to be unpacked and announced that she most emphatically did not work for pigs.
He knew the place was a mess. He'd found his ranch style house on the market at the right price and decided to celebrate his recent promotion to vice president of the advertising agency where he'd worked for the past twenty years by moving out of the tiny apartment he'd lived in for years and into a real home. It was the house he'd imagined so often as a kid, boasting a large yard, open floor plan, huge kitchen, four bedrooms, three bathrooms, gorgeous picture windows, and vaulted ceilings.
Of course, in his childhood fantasies, the house had been occupied by him, and a beautiful wife—a golden-haired, blue-eyed, petite Florence Henderson look-alike—and a bevy of beautiful, intelligent children. He'd suffered a minor setback at seventeen when he discovered he was gay, but after due consideration, he’d replaced Florence with Phillip Henderson and been instantly back in business.
The housekeeping candidate hadn't cared about his dream-turned-nightmare. She'd flounced out before he could even give her the job description. The second applicant had sat sipping coffee in his office, murmuring noncommittally in response to his job description for several moments. He nurtured high hopes for the middle-aged lady, until she abruptly interrupted him to demand, "Are you one of them? Because I'm looking at you, and I'm guessing, Myrtle, he's one of them. You're a gay man, aren't you?"
He'd sat in stunned silence, mouth hanging open a bit too long as she began to spout fire and brimstone and call upon God to wreak his vengeance on all sodomites. She'd still been spewing vitriol as he clasped her elbow and hustled her the few feet from his home office to the front door and out onto the sidewalk.
"I'm looking for someone to cook a few meals and scrub the toilets, not validate my existence!" he called after her as he slammed the door.
The third applicant hadn't spoken a word of English, and since he had zero chance of learning to speak Hmong, he'd nodded, shaken his head and hustled her out the door as quickly as he could as well. The fourth applicant had been a no-show. It was depressing. He'd really screwed up his chances of fulfilling his lifelong dream by purchasing the house before he'd found the Phillip Henderson to manage it!
Hiring a housekeeper to manage his home life much as his secretary managed his business life was a brilliant option. The housekeeper could handle the dream house that had become a nightmare, and he could concentrate on finding that Phillip Henderson after he got his work life sorted out again.
Instead, the only candidate he would even consider hiring had been the fifth. She'd been a perfectly wonderful grandmotherly type who'd labeled him adorable and patted him on the cheek like he was a six-year-old boy instead of a forty-year-old businessman. He'd fallen more than a little in love with her right at the moment her soft wrinkled hand patted his cheek so sweetly. Unfortunately, she looked to be about ninety-six, and delicate—as though her spun sugar white hair would melt in the rain. He'd have felt guilty as hell asking her to clean up after him. He'd kept her number, just in case he could come up with a reason to invite her back over after his house was in order. She'd be the perfect grandmother figure for the children he had yet to adopt. Phillip Henderson, where are you?
Sighing, he looked up from the scrap of paper. "You're applying to be my housekeeper?"

Keeping House is a short and truly light read. It comes out a bit fairy-talish in fact and it was a lot of fun going through the short pages that ends with an incredible HEA. Why incredible? Well, it is fiction and it is a very light read with a touch of the Cinderfella with a twist. The twist is that Mischa is richer than rich just not getting access to his millions right now and the prince is a rich but not as rich older self-made man.

Donovan hires Mischa as his housekeeper/personal assistant of sorts and realizes he likes going home to the young man. Mischa had never cleaned anything in his life but thanks to Google and YouTube, he gets all the tips he needs. Including everything I never even thought of.

This was a giggle of a read and well worth the hour I spent on it. Lovely, short story.

Note: eARC Copy provided by Pride Promotions for what was supposed to be part of a blog tour but I missed out as my files got deleted because of the dratted virus.

Somewhere in a small town in up-state New York are a librarian and a second grade teacher to whom I owe my life. That might be a touch dramatic, but it's nevertheless one hundred percent true. Because they taught me the joy of reading, of escaping into worlds crafted of words. Have you ever been nine years old and sure of nothing so much as that you don't belong? Looked at the world from behind glasses, and wondered why you don't fit? Someone hands you a book, and then you turn the page and see… There you are, running from Injun Joe in a dark graveyard; there you are fencing with Athos; there you are…beneath the deep blue sea- marveling at exotic creatures with Captain Nemo. I found myself between the pages of books, and that is why I write now. It's why I taught English and literature for so many years, and it's why my house contains more pounds of books than furniture. If I'd had my way, I'd have been a fencer…or a starship captain, or a lawyer, or a detective solving crimes. But instead, I am a writer, and I've come to realize that's the best thing in the world to be, because as a writer, I can be all those things and more. If I hadn't learned to value the stories between the pages, who knows what would have happened? Certainly not college…teaching…or writing.

Posted by multitaskingmomma at 1:51 AM