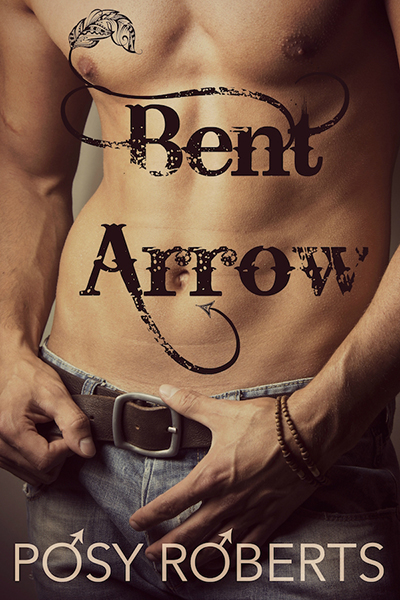 Sometimes curves in the road take you right where you belong.Luther Almond’s life working the Bakken oil field is perfect—short-lived jobs, temporary housing, and easy hookups. That’s one reason he won’t move home when he inherits the lake house. When Erik Heat bends over to fix Luther’s pipes, his tattoos hint he might be up for more than working on the drain. The last thing Luther expects is to want more from this guy than one night. Every time they’re together, Luther is more grounded and Erik more confident. When the lake house demands attention, Luther asks for Erik’s help. There he imagines a more permanent life, one where he stops running. But he wants Erik by his side. Can he find the courage—and the words—to ask?

I want to begin this review by quoting author Posy Roberts’ words about herself.  She states she writes about “REAL LIFE.  GENUINE MEN.  TRUE LOVE.”.  I would add to that she also writes exceedingly well.  This book was full of surprises for me—all of them good.  The story caught hold of me as did the characters and I didn’t stop reading until I’d finished all ten chapters.  It’s a short story and I did have misgivings about that when I started.  Oftentimes it’s difficult, if not impossible, for an author to fully flesh out their characters or story in such few words.

Posy Roberts managed to succeed on both counts.  Her characters are well-rounded, realistic and multi-faceted.  The storyline held my attention from beginning to end.  All of it was satisfying, and everything had a ring of truth about it.  No false melodrama and no unnecessary fluff.  I really enjoyed the way Roberts has with characters.  She had me wanting to know about them, what made them tick et cetera.  As a short story I found it perfect.  But, I’ve been sitting here wondering if she could’ve made it into a full-length novel or if it’s perfect just the way it is.  Roberts can spin a good yarn and write characters well and it would be interesting to see how the story would’ve played out full-length.

Quick note about the cover—well done, but doesn’t work in my opinion.  The cover doesn’t really relate to the story.  For reasons which will become obvious, once one has read the book, I think a rear view was in order on the cover.  Rather then a shirtless body—a nicely shaped butt would’ve tied into the idea of the story better.

Bent Arrow is an interesting and sometimes startling mix of good story and hot sex, for lack of a better word.  At first I was worried it was a lengthy stroke story because of the detailed and vivid sex scenes.  But the scenes fit the characters and there is a true story being told.  Our leads, Luther and Erik are masculine men working tough jobs who enjoy sex in a way that reflects who they are.  The story works, the characters are engaging, sexy, and appealing.  Bent Arrow is a nice little gem I can strongly recommend.  I thoroughly enjoyed it.  Brava Posy Roberts!

Erik had the quintessential plumber’s crack, but holy… it was not at all repulsive. And on his left ass cheek was a tattoo. From where Luther sat, it looked like an elaborate arrow, or at least the tip of an arrow pointing toward his ass. The rest disappeared under his clothes. Luther assumed it wrapped around his side, and he wondered what sort of fletching was at the other end. Did it end right above his cock, obscured by a dark thatch of pubic hair, or nestle in his V, just skirting his hipbone?
Luther stood up, grabbed a can of pop from the fridge, and stepped closer to study the tattoo. He spied a dark smudge right above the beautiful arrow tip and barely kept himself from bursting into laughter when he realized what it said.
Insert here was inked in faded letters, nothing at all like the professional thin lines of the quality arrow. This looked like the shit tattoos his high school friends gave themselves with a sewing needle and India ink before they were old enough to get a professional one. Or a prison tattoo.
Yet it was like an invitation just waiting to be noticed.
“Is that true?” Luther asked.
“Is what true?” Erik’s voice was muffled.
“‘Insert here.’”
Erik immediately sat back and tugged both his underwear and his jeans up to cover his left hip as he cursed under his breath. “Shit. Stupid tool belt.” He flushed bright red and then muttered words that were hard to understand, but Luther thought he made out undershirt and aerator. Erik scrambled to toss his tools in his bucket, taking no time to organize them in the same way they’d been when he’d arrived, and he tripped over an area rug as he bolted toward the door.
“Hey! Stop,” Luther said. “Just—stop!”
Erik did, but he faced the door, refusing to turn around.
“I’m gay, so you’re safe here, if that’s what that tattoo’s truly about.”
Erik turned his head slightly, only enough that Luther could see his dark eyelashes as he blinked in double time.
“It’s not an easy place to be out. I know. But then… why have that tattooed on your ass?”
“Long story,” Erik said.
“You were going out to your truck to get more tools?” Luther offered, to help the guy save face.
“No.” He hiked his pants up and tightened his tool belt a notch or two. “I’m gonna keep working.”
“All right.” Luther sat down on his couch again, tugging his iPad back into his lap and pretending to no longer care about those smudged words that obviously meant a hell of a lot to Erik. At least keeping them hidden did.

Real life. Genuine men. True love.Posy Roberts writes about the realistic struggles of men looking for love. Whether her characters are family men, drag queens, or lonely men searching for connections, they all find a home in her stories.Posy is married to a man who makes sure she doesn’t forget to eat or sleep. Her daughter, a budding author and dedicated Whovian, helps her come up with character names. When Posy’s not writing, she enjoys crafting, hiking, and singing spontaneously about the mundane, just to make normal seem more interesting.

Posted by multitaskingmomma at 5:23 AM