Review: For Love Of: Colt by Antonio 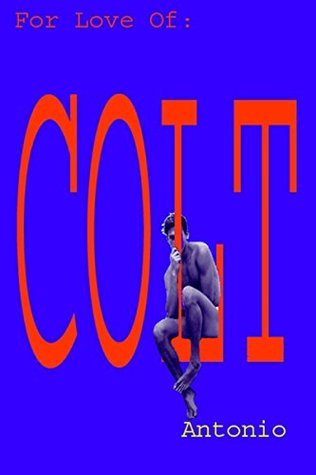 
This book picks up the story of Colt and Tangi five minutes after the previous book ended.

Colt and Tangi are in love and they've survived being crowned homecoming kings.  But if they're expecting the craziness in their lives to settle down—they couldn't be more wrong.  Even though members of Colt's football team, the cheerleaders, and the entire high school become involved in the couple's romance, Tangi and Colt persevere.  And Tangi stands strong when the time is called for him to do so.  All… for love of Colt.

For Love of: Colt is a hilarious coming of age story from the point of view of Colt, Tangi's boyfriend. If you recall, the first book was written where Tangi was the new kid on the block and Colt fell for the beautiful, talented and deadly boy. Tangi's family is a very open and accepting one but Colt's is a different matter. For one thing, Colt does not know if his family will accept his coming out. Only way to find out is for them not to find out. In the process of hiding out in the open, a series of unfortunate events fall on the unsuspecting parents. To make matters complicated, the parents are not limited to Colt and Tangi's, it encompasses all of the parents in the neighborhood. Talk about confusion!

When that book ended, it was at the prom and quite a few things fell into (dis)order but also it was what ironed the whole situation out. Parents came together in full support of their children, both gay and straight, and all have a great time. This book, opens on that same night.

As mentioned, this is a coming of age so the young men are still in their roses and daisies stage and quite open yet closed. This sets the tone of Colt's story which gets complicated when his friends continue to make sure the love and acceptance Colt and Tangi got from the school and neighborhood spreads out to the rest of the population. Of course, in keeping with the theme, this is a book beset with another set of unfortunate events.

The kids are young. Their maturity levels rise and fall in accordance to the whims of their rebelling hormones, logic is thrown out the window but caught by someone else who may least catch it. It's a whole lot of confusion and giggle worthy scenes, quite representative of the series theme. At the front of it all is Colt who knows what he wants and knows he's going to get it done, he just slips and trips along the way. They are eighteen going on twelve these guys and it makes for a hilarious yet romantic read.

Note: This is the second installment to the For Love of series and must needs be read back to back.

Related Link:
Release Day and eARC Review: For Love of: Tangi (For Love of: #1) by Antonio