Oracle - The Complete Collection includes Oracle and Book of Secrets for a special cover price of $4.99. 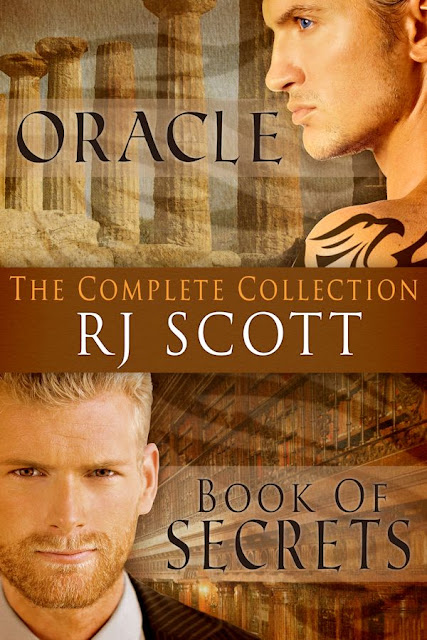 Love, adventure, an empath & an ancient relic that could destroy the world. Alex Sheridan is a thief, able to steal even the hardest to reach antiquities. Luke MacKinnon is a professor of ancient languages. When they come together to locate the Oracle, it is because both men have targets on their backs. Can love blossom when each day could be their last? And, how can they survive the evil that wants the Oracle?

Kidnapping, adventure, drama and the fight for eternal life.
Alex is making good on his promise to put things right; retrieving items he had stolen, and returning them to their rightful owners. It's dangerous work, especially since he lost his most useful Oracle-given powers.
When Luke is kidnapped by a man intent on finding the secrets to eternal life, Alex has to make a bargain with the devil and break steal an item from the private library at Windsor Castle. Will Alex be too late to save the man he loves?

The Oracle Collection. It screams paranormal and mythology from the one word title. It is a weighty book to read as it tells the story of how one little boy from millennia past is thrown into a conspiracy cooked up by both man and gods. What happened then changed everything. Past. Present. Future. The times are merging and caught in the middle is Alex.
Alex does not know where he came from or who his parents were. The only memories he has are those of pain and sorrow. His body is scarred and tattooed. The scars, he can only recall pain and blood. The rest are a blur or misleading visions. The tattoos he did on his own body, to cover the scars. The scars are intricate. Deep. The meaning, unknown. Until one night, when his life is once more upturned by the loss of a beloved does he realize his past is catching up on him.
Luke has a mind that boggles even his colleagues, let alone his family and friends. The tiniest bit of information never escapes his notice so making his translations of ancient languages seem like child's play. When he sees Alex for the first time, from a distance, he feels a connection he could not ignore. When he is called in to examine the tattoos... this is when the fun begins... and the pain, sorrow and violence escalate.
This is a fantastical read and the complexity confounds at times but keeps on going. One missed page and the whole plot falls around the reader so let this be a WARNING! Do not skip pages. Read each word and stamp it to memory. There are two books here and what happens in the first will affect the second. Strangely enough, what happens in the second, affect the recollection of the first.
Oracle. A different RJ Scott in its mysticism and strangeness but the stamp of romance and heart throbbing moments, they're all there.

Posted by multitaskingmomma at 2:26 AM