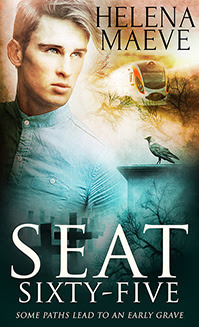 
Some paths lead to an early grave.
A power failure on the midnight train from Innsbruck to Vienna has stranded Felix in the middle of nowhere. It’s not a good start to his getaway, but it’s made worse by the presence of a fellow passenger who won’t stop sizing him up.
With his scant few belongings thrust into a backpack, Felix wants nothing more than to get to the airport and fly home to London. Whatever he does after that can’t be any worse than staying in a failing, rancorous relationship. But Felix has always been a magnet for dangerous men and the handsome stranger who keeps eyeballing him isn’t so easy to ignore.
As the world itself seems to spin on a dime, Felix follow his admirer deeper and deeper down the rabbit hole, until retracing his steps becomes as trying as it is inevitable.
Reader Advisory: This book contains past domestic violence as well as past physical and emotional abuse.

Review by: Giles West
My Rating: 3 of 4 Stars
(Based on Short&Light Read Category)

The cover of this short story is interesting and thought-provoking.  All the elements of the story are there and hint at what it’s about.  The colors are somewhat muted and while not as eye-catching as bright colors might be, they work.  Usually I begin a review by talking about the story first, but I’m still trying to digest what I read.

Seat Sixty-Five barely gets three stars from me.  It’s a strange story.  Clearly Helena Maeve is working hard to set a mood and feel.  The problem is that the piece feels overworked.  For example in these sentences:

“Trembling raindrops slithered up the windowpane in meandering rivulets. Felix tapped
his fingertips against the glass, measuring the progress of the fattest tears.”

In all honesty, it’s just too much.  This sort of writing makes it feel like the author is trying to be an author rather than just being an author and telling a story.  There are some authors who can get away with writing like that and whose words sound almost poetic, but they are a rarity. And that sort of florid language works better in fantasy novels not ones which take place in the current day.

Despite the flufferious prose (I just made up the word flufferious and it does fit this work) the story did intrigue me.  I read the entire short piece in one sitting, so there was something in it that kept me going and that says a lot.  It’s probably also the biggest reason this review made three stars.

With this type of story it’s easy to give plot points away, so I won’t talk about details.  Here’s what I think worked and what I think didn’t succeed.  The portion of narrative taking place on the train set up a very nice mystery and mood.  It felt like an old 1940s black and white movie. I was there and I was full invested in characters and plot.  Once we, the reader, leave the train the story becomes more predictable but it’s still interesting.  There’s a bit of a fairy tale feel to this second part of the story.  I’m just now struck by something.  It occurs to me that maybe this part was meant to be more gothic in feel (as in Jane Eyre not black clothing and piercings). In any case, it came across more fairy tale with some adult sex thrown into the mix.

So far, I’m still in with this story.  I’m on the journey, haven’t jumped off the train—that’s a good thing.  Then comes the finale and I’m left thinking “what the f***.”  And, yes that’s exactly how I felt.

Now some of the plot was obvious and I could see certain things coming from miles away.  But the vague ending was just way too “vague” for my taste.  In my mind I had worked up several scenarios while reading the story and had a few theories in my mind.  The problem is there wasn’t enough in the ending to justify any scenario.

Helena Maeve tries to do several things in this book.  She attempts to set a mood—I think she succeeds there.  Maeve also tries to give us an interesting and compelling mystery and I think she does that well also.  Then she mixes in domestic abuse.  Even that works.  The problem is that the ending doesn’t satisfy… in a bad way.  It sort of reminds me of a Twilight Zone episode which has a big GOTCHA! at the end.  Even when you’ve figured out key points of the episode there is still a surprise twist which leaves a satisfying feeling deep down in your belly.  No such thing at the end of this book.

The end feels unfinished somehow.  Not like the stories purposely left for you to figure out, but more like the author didn’t feel like finishing the last bit or couldn’t decide how to end it.  That is not a good thing, and actually something I really don’t like in stories be they on TV, in the movies, or in books.  To me it always feels like the author didn’t quite know how to tie up the loose ends.  They know how to hook in the reader, in an almost textbook, by the numbers kind of way but then can’t land the deal.

I did something unusual after I wrote this review and I showed the story to a close friend of mine for a second opinion.  He wasn’t impressed but he wasn’t as confused about the ending. Although, he did think it felt unfinished.

So, I’ll address a couple of points, trying my best not to give anything away.  The main character, Felix, suffers from severe head pain at several points in the story.  I kept reading and waiting for a satisfactory explanation for this pain.  Yes, he mentions past domestic violence, but it seemed like he was suffering very real pain in the present.  In my mind I had several theories for what was happening, but the story ended with no explanation for the pain.  I’m not sure if we were to infer that he was reliving old pains or what have you?  The ending was very abrupt.

I think there was real promise in the beginning story-wise.  The writing is not a strong point here at all.

I will digress again for a moment.  One thing I have noticed is how so many short stories lately have no real ending.  It’s like they’re meant to continue as part of a series or at worse, badly written.  This is not a good thing, it brings down writing as a whole.

Read A Sample
(via Pride Publishing)

Note: Copy provided by publisher for an honest review.
Posted by multitaskingmomma at 2:00 AM