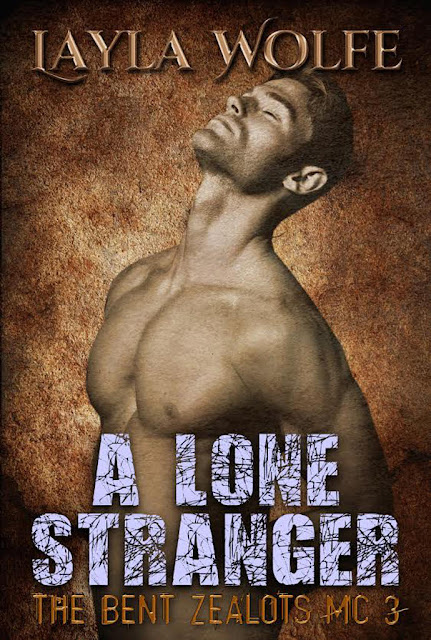 Ride on.  Ride on.
HARTE:  After a world-altering run-in with the guy I thought was my father, I went on the road to find myself.  I patched over to The Bent Zealots MC, an out-and-proud club on the Colorado River.  A cock virgin, I raced to experience all I could, eagerly sniffing every nook and cranny, a whole new existence offered up by Grindr.  But when Ormond Tangier was assaulted by a rival club, I quickly got down to brass tacks, to show my new brothers I was all business.
Too bad that business involves Bond Blackburn, jailbird brother of our Prez, Turk.  That guy is so far in denial he’s practically Egyptian.  But he even he can’t deny what I saw with my own eyes at the gay club.  Sure, I was on my knees paying homage to a Daddy Dom, but Bond can’t pretend he wasn’t getting some oral praise as well.  And now they’re telling me I have to work with this hypocrite?
BOND:  This club is a fucking joke.  How’s a man supposed to make a new start after the joint?  First, my own brother forced me to prospect.  I couldn’t automatically rise to the top of the heap through my family connections.  No, I’m supposed to labor in a noxious sweatshop making product for their pot dispensary.  And I have to sneak downtown if I want to get some halfway decent head, because I don’t even want my gay so-called brothers knowing about my shameful hobby.
Now we’re reaching out to the cops to even the score with those Hellfire Nuts who abused Ormond.  And that delicious Harte Saxonberg is getting my goat, so by the book, such bleeding heart.  I just want to strangle him—or fuck him.
HARTE:  I’m stuck between a rock and a hard place, one that slab of a man, Bond Blackburn.  He kisses me, then punches me.  Fucks me, then ignores me.  He’s got me so upside-down I’ve lost the clarity I had a week ago when I rode west.  Ride west, young man.  I could be a steam train if I could just lay down my tracks.  But the only name I’m calling out is that sexy convict’s.
Ride on.  Ride on.
Publisher’s warning:  This book is not for the faint of heart. It contains scenes of gay sex, consensual BDSM, illegal doings, vaguely legal marijuana operations, and violence against men. There is no cheating or cliffhangers, and HEAs for all.


Review by: multitaskingmomma
My Rating: 3.5 of 5 Stars

This is Harte's story and his main squeeze is none other than Turk's brother himself.

Bond has this chip on his shoulder which makes his character complicated. He thinks he has the right to be part of the MC simply because he is the brother. When made to work his way up, more chips dent his oh so solid armor. To make matter worse, he is so closeted he is ridiculous. His denial games and cruel words can be disheartening. The only redeeming factor? He is the main man of this story so he has to somehow rise above the readers' initial distrust and dislike.

The style of writing confused me a bit. Don't get me wrong, I liked the read, it was smooth and the rawness of the characters made it more interesting. Here's the but. When it came to Harte's story, it was told from his point of view. When the scene changed to tell Bond's story, it became a third person voice. This read confused me initially and halfway through but Wolfe is a great storyteller so it smoothed out in the end. But yes, it took me about halfway through to get over the shifts.

Overall, this is an interesting read but it did not draw me in as much as Turk and Lock's story did. This still is action packed, sexy men who skirt the edge of the law, a dom who wants to prove himself too much, a romance that happens unexpectedly despite the odds against them. If you like this kind of read, then this is for you. If you are a stickler to homegrown romance, this is definitely not the book.

Rafflecopter Prize: Books #1 and #2 of THE BENT ZEALOTS MC