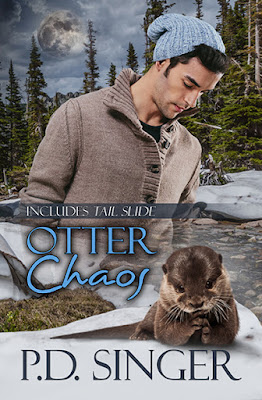 Lon Ewing snowboarded in and turned economist Corey Levigne’s life upside down, introducing him to a world he didn’t know existed. Corey’s still adjusting to a boyfriend who shifts into an otter and raids the koi pond—and now Lon says Corey’s department chair is a werewolf?
Wolves at the university, wolves in the bank—across Lon’s desk sits Professor Melvin Vadas and his hench-wolves, demanding a construction loan for the pack’s new lodge in the mountains. There’s just one little problem: the proposed building site is home to a breeding population of rare fish.
What do wolves care for stupid human rules, an otter who’d barely make a good snack, or one pesky human determined to protect the environment? Once they’re snout to snout with Corey and Lon there’s more than silverscale dace on the Endangered Species list.
Includes Tail Slide (the short that kicked off otter madness)
Fresh powder snow and running water in the Colorado back country call Lon like the moon calls the wolves. Belly-sliding to a good time on the weekends makes up for a workweek at a desk, and meeting Corey adds a whole new level of fun to snowboarding.

It’s easy to slip away for time alone in the woods without raising suspicion, but how’s Lon to entertain himself when bad snow and a worse spill force them off the mountain too early?

Never give an otter a box of Cheerios.

There is a cuteness to this book that is just so cute, it boggles the mind. Look at that face! No, not Corey. The otter. That otter is Lon, a shape-shifter who loves to play. He loves his Corey the two foot and he loves the koi in their pond. Play. Play. Play.

Unlike most other shifter stories, this one endangers the human side when the shift is not monitored. In the case of Lon, whose shape is that of a bird-brained otter, he is in more danger. He loses his humanness in the drama that unfolds. A drama that is really a series of unfortunate events beginning with herons and his koi all the way to his encounter and logical fear of another shape-shifter, a wolf who has just too many sharp teeth.

Corey is the poor boyfriend who not only has to deal with a boyfriend who turns into an otter, he has to deal with cleaning up after the mess an otter makes. Not that bad kind, just the many toilet paper shreds as well as disappearing decorative koi. His is a long drawn out affair of sighs and misery until his Lon no longer seems  the human he should be when he comes back.

This is a good story, my only gripe is, it could have been shorter. Plus, this needs a thorough edit for the sake of world building. I got lost. I didn't know if this was an alternate universe or the shifter world was revealed? As for the complexity of the fight between predator and prey, it was confusing as well. I got lost trying to decipher the wolf shifter society and who was who and which was which.

The good thing about this story is Corey and Lon's chemistry. There is no denying these two men love each other to death, through thick and skin, through sickness and in health, through posturing and sulking, through OCD and its direct opposite. They are an established couple who will fight but never leave each other. In short: they are human.

The best part of this story is Lon the Otter as opposed to Lon the Two-Foot. Lon the Otter is so very interesting and simple in his playfulness and aggressiveness. He is a protector despite his size. He loves play and water. And fish. He is Otter and he is awesome.

I dare recommend this, despite the buts. It is pure entertainment though it could drag a few times. It is not perfect, I did get an ARC so I forgive the typos and such. Overall, great entertainment. It's like watching the silliness of the otters at play and frustration rises. Quite riveting.

Note: eARC provided by Pride Promotions for an honest review.