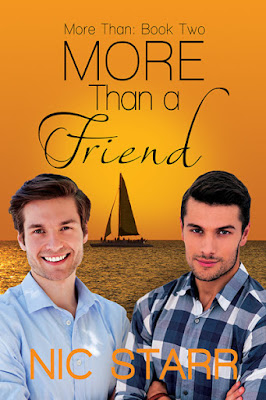 Tim Walker is a free man. He’s broken up with his girlfriend and is ready to move on to a new relationship. But the relationship he wants to pursue is fraught with challenges. Firstly, Scott Richardson is a man, and only Tim’s closest friends know Tim’s bisexual. Secondly, everyone knows Scott relishes the single life. And then there’s the big one: Scott is the younger brother of Tim’s best friend, Paul. Scott can’t deny an attraction to his brother’s friend Tim. Lean, dark-blond, and blue-eyed, Tim is hot and hard not to notice—especially since Scott and Tim work together. Too bad the man is straight, and too bad Scott worries how Paul will react if Scott hooks up with his best friend. Tim and Scott want to see if there’s a chance for more than friendship between them, but neither of them wants to lose Paul. Together, they must find the courage to follow their hearts and find a way to have it all.

We first met Tim Walker in More Than A Superstar, the story of Sam and Rob who we both meet again in this next installment. When Tim finally broke up with his girlfriend in book one, it was a shocker of a scene. This next installment to the More Than series is Tim's story to be told. A.B.U. After the break up. He now has the freedom to live his life and find a love he wants.Thing is, the one he wants is his best friend's brother. Oh boy.

Scott had always been drawn to Tim. He was too hot to ignore for one. Also, he had a girlfriend from hell and it made things difficult. When Tim finally broke up with the she-devil, he still had not chance. You see, he knows Tim is straight. He had a girlfriend, duh!

And then things happened. Oh boy.

The two try out the forbidden and found they liked being with each other. They try to hide things but knowing eyes see and soon it is difficult to think of lying to Paul. Tim does not want to hurt Paul but neither does he want to lose Scott.

This is Tim and Scott's story. It is a short, fast read that does set the emotions high and the romance meter pinging. It is a sweet read with hardly any angst and it does give us the satisfaction of seeing a good man meet another good man and they love each other. There is a certain 'awwwww' factor while reading this, far from the angsty drama that was Sam and Rob's story. Tim's drama happened in book one, at least for me. This one just gives us the satisfaction of closure and a happily ever after for two deserving men.

Yep yep, this is a good read.

Note: eARC provided by author for an enjoyable read and an honest review.

Nic Starr lives in Australia where she tries to squeeze as much into her busy life as possible. Balancing the demands of a corporate career with raising a family and writing can be challenging but she wouldn’t give it up for the world.
Always a reader, the lure of m/m romance was strong and she devoured hundreds of wonderful m/m romance books before eventually realising she had some stories of her own that needed to be told!
When not writing or reading, she loves to spend time with her family–an understanding husband and two beautiful daughters–and is often found indulging in her love of cooking and planning her dream home in the country.
You can find Nic on Facebook, Twitter and her blog. She’d love it if you stopped by to say hi.