Does a second chance at love have a price?Zac McQuade is a former marine living two lives. On the surface, he’s a special agent for the FBI but undercover, he’s an assassin for the Secret Intelligence Service. When Zac returns to his childhood home for his niece’s christening, the last person he expects to see is Brody Maitland, his former college crush. Though Zac’s attraction to Brody has gone unfulfilled, he still thinks of him as the one who got away.Dr. Brody Maitland is a practicing psychologist with a few secrets of his own. Though he has always admired Zac, he thinks he is terminally straight. Currently, Brody is conducting an off-the-record investigation, in search of a young male patient who’s gone missing. Believing Zac’s cover story, Brody enlists his help to solve the intricate case, plunging them both into a deadly game of intrigue and deception. As the attraction between the two very different men heats up, they are faced with the ultimate test of love and loyalty. 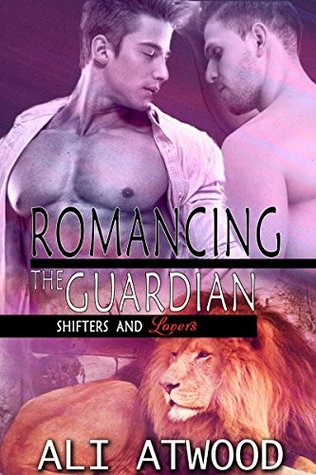 Rick Cantrell is an up and coming actor, who’s been featured in the top ten of the sexiest men’s polls. He also has a stalker on his trail.

Jordan Riker is a lion shifter with a difficult past. He quit his pride due to his controlling father’s demands, and he was burned by his boyfriend shortly after. Now, he’s a newbie bodyguard, assigned to protect the seriously hot, Rick Cantrell. Though Jordan is immediately drawn to the charismatic actor and recognizes the connection between them, he resists Cantrell’s sexual advances to uphold his professional standards and guard his heart from further hurt.

Rick Cantrell is a never-take-no-for-an-answer kind of guy. Despite his bodyguard’s best efforts to push him away, Rick thinks he may have the man of his dreams in Jordan Riker.

Note: This is the first I have read of Ali Atwood. I saw the post on Facebook about a shifter bodyguard and an actor he was hired to protect. Needless,  it was a blurb that intrigued and my curiosity meter pinged. That book turned out to be the second of the series so I read the first installment before going for the second that intrigued me.

Bound to Brody (Shifters and Lovers #1)


Years ago, back in college,  Zac had a huge crush on Brody but nothing came out of it. He mistook the gorgeous boy as straight and respected him. They became good friends but that's as far as it went. Years later, Zac is a secret assassin posing as an FBI agent and is home for some family time. He thinks this will be perfect for some bonding and relaxation, until Brody calls.

Brody had harbored a secret crush on college friend Zac all those years ago but his confusion over his sexuality held him back. It did not stop him from being friends though so when he heard Zac was in town, he calls for assistance on a missing patient.

What started out as a mission impossible for both their hearts and their quest, ended in a situation that neither man expected.

This is set in an alternate universe where psychics openly worked with authorities to find missing persons and shifters were known but uncommon.  The bigotry remains when it came to sexuality and the confusion of the norm vs reality. Both men still feel the need to protect their hearts from possible rejection by their loved one's and lives from those who wish harm on the different.

Zac and Brody search for the missing patient and stumble into a love affair that may just be their happily ever after.  It is a romantic read, the mystery flowed and developed very well, the antagonist was curiously pathetic and dangerous simultaneously and the plot went through a few twists and turns that made this a fun read.

Not too long,  the author does not waste time to plunk he reader into the story which made this a short and light read somewhat.  Can be read in one sitting. Now I have to finish the second book ...

Note: Copy graciously provided by author on the advice this be read before the second installment.  Oh, and for an honest review.

Romancing The Guardian (Shifters and Lovers #2)

This takes place a few years after Bound to Brody. The two had discovered a pride and settled with them. After a while they had decided to set up their security company and this is where Jordan Riker comes in.

Jordan was supposed to be the heir to the pack leadership it's just his sexuality got in the way. Instead of allowing the feelings of misery and depression to bring him down, he decides to leave. Zac and Brody offer him a job and now he is a guardian, or a bodyguard.

Rick is an actor who is up and coming because not only is he a good guy and actor, he has one of those faces that are considered as an IT. With fame comes the glory and money and with that comes in the undesirables such as a stalker.

Jordan has got his work cut out for him. His job is not that difficult but being with Rick is. There is a chemistry that burns and it is impossible to turn the other way when the appreciation is returned and flaunted.

This romance is absent of action scenes with the author dwelling more on how the two men begin to know each other and finally find that chance of a real happiness out in the open. Rick is still not out to the public so must weigh his options carefully. Jordan is easy with the whole situation being more focused on protecting Rick.

Again, Ali Atwood brings the story to the fore without wasting much time. There is no overwhelming angst to get through and the men are acting like the men they should. No drama, no gushing of the emotions, just facing life as it is dealt them. I really liked Jordan and Rick's story although I have to be honest and say, I fell in love with Zac and Brody. Jordan has this tendency to clam shut and Rick's abilities to get his emotions up is kind of funny for he succeeds without hardly even trying. I think Jordan is just plain whipped by Rick. Thing is, I wish this second book were longer for there were some information between this book and the first that were lost in oblivion. If the author can come up with a story that comes between these, then my questions would be answered fully.

Note: Copy graciously provided by the author after her advise the first be read beforehand. She's right.