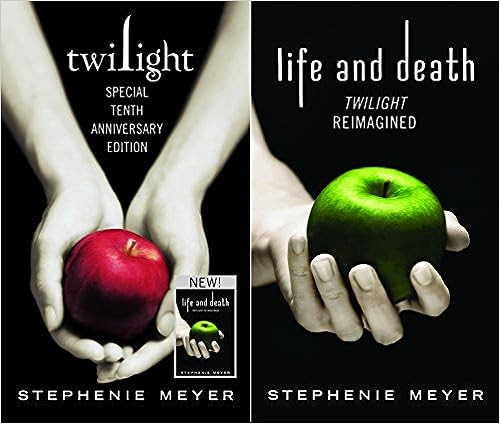 Celebrate the tenth anniversary of Twilight! This special double-feature book includes the classic novel, Twilight, and a bold and surprising reimagining, Life and Death, by Stephenie Meyer.
Packaged as an oversize, jacketed hardcover “flip book,” this edition features nearly 400 pages of new content as well as exquisite new back cover art. Readers will relish experiencing the deeply romantic and extraordinarily suspenseful love story of Bella and Edward through fresh eyes.
Twilight has enraptured millions of readers since its first publication in 2005 and has become a modern classic, redefining genres within young adult literature and inspiring a phenomenon that has had readers yearning for more. The novel was a #1 New York Times bestseller, a #1 USA Today bestseller, a Time magazine Best Young Adult Book of All Time, an NPR Best-Ever Teen Novel, and a New York Times Editor’s Choice. The Twilight Saga, which also includes New Moon, Eclipse, Breaking Dawn, The Short Second Life of Bree Tanner: An Eclipse Novella, and The Twilight Saga: The Official Illustrated Guide, has sold nearly 155 million copies worldwide.

Review by: multitaskingmomma
My Rating: A Twisted 5 Stars

Let me say just one thing: I truly admire Stephenie Meyer. She came up with a sparkling idea and did not stop pimping it out to agents and publishers. One of these publishers got interested and that was the beginning of a love/hate relationship between Meyer and her readers. That lone book went on to become a quadrilogy with a spin off and became subject to a fan fiction that turned the chaste love between a quiet, shy girl and a vampire into an incomparable and unconscionable faux BDSM. The Twilight books moved on to become one of the biggest franchises in moviedome. Now, ten years later, she decides to give that series a revamp. Instead of a Bella, we get a Beau. Instead of an Edward, we get Edyth. The gender swap is apparent. The story is not. Not only has it been revamped, it turned a bit darker. For those who decided to DNF for the sake of it, you missed out on an idea that had been simmering for years online and in the homes of readers/fans. The WHAT IF is finally answered. Do we like the answer?

Now, for the review.

As I said, this is a revamp and so whoever were female became male and the male became female. With their revisions, the characters we learned to love (hate?) became different altogether. However, Charlie, Renée, and Phil remained the same. If they had been changed, Meyer would have come up with a different book.

The story is the same. Basically. The words are the same, except for the obvious changes. In an interview, Meyer stated she did not make a lot of changes. Until she reached a certain point where the whole Twilight arc diverged from the familiar path into a darker one that screams: STAND ALONE!

Life and Death. It is literally about the life of Beaufort Swan and, Spoiler Alert!!! his death. Yes ladies and gents, his death. That is in the title so it is really not a spoiler. Just wanted to lay it out there. For those who said, DNF and wondered where the death came in? Just open the pages again if you please. Don't DNF and wonder?!

The Quileute wolves are still present but they are fiercer in their outlook than compared to the original pack. Why? Well, they are matriarchal in this one and as they say, there is no wolf fiercer than a female with cubs. Once Meyer changed the sex of the wolves, especially the alpha wolf, then the whole persona of said wolves also changed.

Now, for the hunt. It is still there. The hunter again, gender swapped, came out darker and more evil. Again, why? Because the man became a woman and a woman who is at her most insane and maniacal moment is insane and crazily maniacal in her determination and cruelty. Just laying it out there again, folks. Women are crazy bitches. It's a fact of life.

Stephenie Meyer took a risk and never looked back. For Twilight and then this one. Despite the mixed reviews, especially from those who never bothered to read, buy or open the pages, she took a risk and came out the winner.

I truly hate her you know? I truly do. She took an old manuscript and changed the names and genders. Then she changed the ending in such a way that shocked this fan. I'm not sure I love this story, but I am definitely astounded I finished this last night. I lack sleep, okay? Any typos you see, don't mind them. Thing is, this is a totally different book from the first. Call it what you will, point is: this is a great tenth anniversary surprise to the fans of the series. Will this be turned into a movie? I could only guess. As one producer said (loosely quoted fyi) Meyer has this tendency to write fiction that strikes the readers and movie makers somehow, somewhere and comes out with sure hits.

This is a hit. At least it is for me. Do I love it? Yes I do. Why? Because Meyer is a woman of conviction who wanted her voice heard through sparkling vampires, got insulted by it, got criticized for not writing 'worth a damn' and got quoted in tens of movies and thousands of books. Check it out, there is always a reference to: I'm no sparkling vampire ... or something to that effect. Which means what?

Note: Now I want to monitor the other one who wrote fanfic and let's see what that one writes... sigh... fanfic... Meyer rocks!!! Betcha that one will come out with a revamp... erm,  sorry: retie/whip/blindfold? oh well...

Posted by multitaskingmomma at 4:27 AM