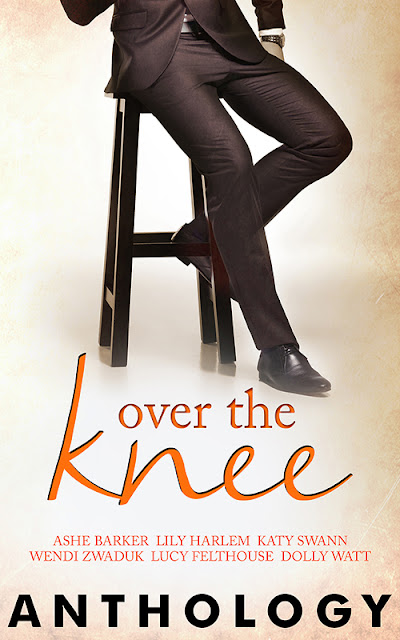 Buy Over the Knee here.
Blurbs for Over the Knee:
'In the Eyes of the Law' by Ashe Barker
She’s still his wife, in the eyes of the law. But is she still his submissive? His to spank?
A momentary lapse of concentration places Libby Novak on the wrong side of the law. A criminal conviction could lose her her job. How much worse could this get?
'Spicing it Up' by Lily Harlem
Heat from a spanking ensures Cassandra simmers with pleasure in a way she never would have imagined.
Cassandra lives by a set of rules that both thrill and complete her. Having Master Raif attend her every need in and out of the bedroom is perfection. But when he announces an erotic new way to spice up their after-dinner party she can’t help having a few nerves. Really? That? There? And would it feel good?
'Kneel for You' by Katy Swann
Should she agree to be spanked?  Just the once? It would all be in the name of research, of course…
When journalist Kirsten Anderson is told by her boss to write an article about BDSM, she’s extremely reluctant.  She tries to get out of it by claiming she doesn’t know anything about BDSM, but that isn’t strictly true. None of her colleagues know about her kinky past and she has no intention of letting them find out, but she’s in no position to turn the assignment down either.
'Silk and Decadence' by Wendi Zwaduk
There is always fun in the club, but taking the fun outside and into life might be exactly what’s needed for a lifetime of passion.
Sadie never claimed to be a good girl. She loves to be at Push, a local dance and BDSM club, but she longs for more—especially with Master E. The blond-haired man with the sparkling brown eyes is everything she wants in a Dom. Too bad he’s also her boss at Delight Tonight.
'Properly, or Not at All' by Lucy Felthouse
How will a husband and wife cope when they’re told one of their favourite kinky pastimes is temporarily off the menu?
Tristan and Jayme are not only devoted husband and wife, they are also Dominant and submissive, with a particular penchant for spanking. They’ve been playing delicious kinky games for the fifteen years they’ve been together and couldn’t be happier.
'A Private Education' by Dolly Watt
Archivist Emma Willoughby learns a lesson in kinky lust when she’s invited to assess the ninth Earl of Folchester’s private library.
When Emma y is invited to assess the private library of Lord Leopold Denby-Peel, she isn’t expecting to find Victorian spanking diaries in his leather-bound collection. Nor is she expecting the earl to be quite so young and handsome. As she explores the pages of his nineteenth century erotica, Emma finds herself craving to receive chastisements comparable to those depicted.

A Private Education: Nice but Naughty by Dolly Watt
Nice places bring out the naughty in me, and I know I’m not alone. Libraries, churches, museums, and bookshops – places with a hushed air of reverence – all inspire an urge to misbehave. Don’t get me wrong, I don’t want to cause a scene. I don’t want to swing from the chandeliers or do an exuberant naked streak (and trust me, you wouldn’t want me to either!) I merely want to corrupt the silence with subtle disruptions. My actions probably wouldn’t even be noticed, except by me and my sexy partner in crime. (Aidan Turner, in case you’re wondering!)
This rebellious instinct is probably behind my decision to set a spanking scene in a stately home. After all, you really shouldn’t, should you? Think of those valuable Chinese urns, those soft-as-moss carpets, those unsmiling ancestors casting their disapproval from gilt-framed portraits. And on top of that, there are the servants, quiet as mice but eager to report any salacious gossip to their co-workers downstairs. It would be wrong to do something naughty in such a place. And yet so very, very right!

Left alone in the library, Emma discovers that what, at first glance, appear to be Victorian household accounts, are actually volumes of antique, leather-bound spanking diaries. Before long, she’s poring over the books, absorbed in a nineteenth-century world where the landed gentry have no qualms about disciplining the servants in a highly kinky manner. When Leo interrupts her reading, Emma is brought straight back into the real world.

In “A Private Education”, my story in Totally Bound’s kinky new anthology, Over the Knee, my heroine, Emma, is an archivist who’s been invited to assess the private library of the ninth Earl of Folchester. Archivists, like librarians, are stereotypically prim and proper but famed for having secrets under the surface. Emma is no exception. However the Lord of the Manor, Leopold Denby-Peel, is most definitely not your typical toff. He’s young, handsome and cheeky. And his private library contains some very private journals.
Except it’s not quite the real world, is it? Because Emma is in a stately home, one of those places with a genteel, rarified atmosphere where one really ought to be on one’s best behavior. Where one ought not to be getting aroused at the thought of being well and truly spanked for the very first time. I mean, she really shouldn’t, should she? It would be wrong. And yet so very, very right!


Excerpt from “A Private Education”
“You’re longing for it, aren’t you?” Leo continued. “Longing to get spanked and fucked.”
Emma was too shy to reply but a ferocious need coursed through her body, a jumble of emotions swirling within her. She’d never known a desire so strong and strange.
“I can’t hear you,” said Leo. “Are you longing to get spanked and fucked?”
“Yes, Sir,” she whispered.
“Thought so.” Leo sprang at her from behind and threw an arm around her waist, knocking her off balance.
Emma squealed as, clasping her tightly, Leo pulled her down with him until he was sat on the wide step, Emma across his thighs, thrashing and protesting. She grabbed an ornate banister post to steady herself and howled as Leo landed a hard slap on her bottom.
“When I ask you a question, you must reply immediately,” snarled Leo, bringing several blows crashing down onto her buttocks, snug within her pencil skirt.
Emma beat her feet against the steps, terrified that a servant might see them, wildly scanning the enormous entrance hall through the bars of the banister for signs of life. She met the glass eyes of a stag’s head but no living, breathing creatures were in sight. Surely they wouldn’t be far away. Gasping and writhing, Emma desperately tried to keep quiet so as not to attract attention, but the challenge was beyond her.
“What must you do?” asked Leo, still spanking her over and over as she squirmed in his lap.
“Reply, Sir,” she gasped, a hot glow setting her cheeks aflame. “Immediately!”
“Good girl, you’re learning.” Briefly, Leo stopped slamming his hand onto Emma’s rear and began tugging her skirt up her legs.
“Oh God,” wailed Emma, fearing he was about to expose her in what could be a public place.
“Trust me,” said Leo. “I want you to remember this lesson and this is the only way to ensure it. And don’t forget, it’s for your own good.”
Despite her fears, Emma was thrilled by Leo’s bossiness. She could feel his erection digging into her side through his jeans, jabbing her as he moved. Eagerly, he shoved her tight skirt up past her sheer hold-ups and higher still to bare her buttocks. Cool air breezed over her skin, and she clung to the banister, unable to prevent herself from wriggling in anxiety and hunger. Her swollen pussy throbbed and she couldn’t curtail her cries. 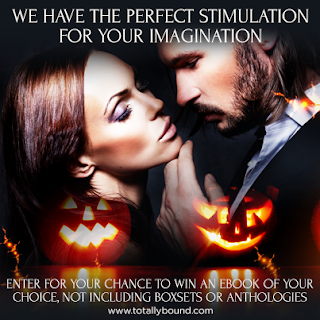 Enter Totally Bound’s October blog tour competition for the chance to win an eBook of your choice, not including boxsets or anthologies. 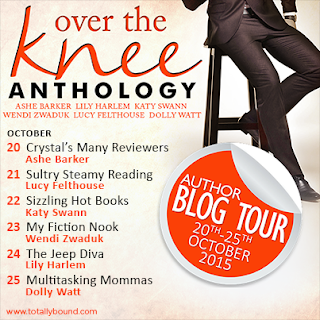 Posted by multitaskingmomma at 2:39 AM