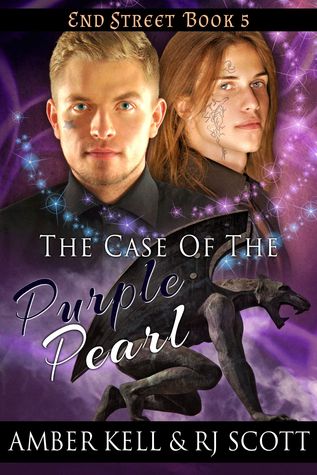 End Street Book 5: The Case of the Purple Pearl
By Amber Kell and RJ Scott
Due out 22nd November 2015
Buylinks here when available

After failing in a quest to win the Fae Queen’s approval, Halstein is locked in a world of stone. Forced to remain a gargoyle he spends his days on Sam’s desk pining for his lost love.
Prince Idris’s lover went missing and was presumed dead. Alone, Idris lives a life away from court, starved of energy but unwilling to sleep in the room he once shared with his beloved.
Can Sam and Bob save these fated lovers before it's too late? And will Bob’s ultimate sacrifice be enough to free Hal from his prison?

Excerpt
Chapter One “What are you doing?” Sam sighed. This was the fifth time today their visiting gargoyle had asked him that. Three weeks had passed since it had decided to stay at the house and wait for Sam to find it a master. And those three weeks had lasted a very long time. “Taxes,” Sam muttered. The same answer he’d given every single time he’d been asked. “I don’t like math,” the little gargoyle said. He waddled across Sam’s desk, leaving small muddy footprints on a neatly filled-in form. Sam couldn’t even muster the energy to get angry. “Are you going to tell me your name yet?” Sam asked. He placed his pen on the desk and leaned back with a stretch, eying the small gargoyle against the hulking monstrosity that sat immobile on the corner of his desk. They were so dissimilar, in size and expression. “You know I can only tell my master.” “I can’t keep calling you the little gargoyle. I’m going to have to give you a name.” The little gargoyle turned in a circle to face Sam, then squatted into a pose with his mouth open in a snarl. It looked pretty mean, and Sam edged back. “What’s wrong?” he asked. The gargoyle’s expression changed back to the one he usually had; that of a dopey baby. “Nothing, I was just giving you my fierce face so you can give me the right name. I’m not having you calling me Sunshine or Cutie. I want something strong like Zephariel Angel of Vengeance.” Sam couldn’t help the snort of laughter, then immediately felt guilty when the gargoyle’s expression fell. “Sorry,” he apologized. “It’s just, uhm, that name is taken. How about Leo, like a lion, a brave, strong lion.” The gargoyle tilted his head in contemplation, then nodded. “Leo, I like Leo. I’m done with you now. You already have a gargoyle. I’m going to find my true master.” That decided, he jumped down off the desk and waddled over to the door, sidestepping awkwardly when Smudge slunk in with intent in every step. In a leap, Smudge was up on the desk, sitting right on the tax forms and staring straight into Sam’s face. “What are you doing?” Smudge asked telepathically. “Taxes,” Sam answered. He didn’t add a sigh this time. “You should be tracking down what kind of other your uncle’s pet gargoyle is.” Leo, the newly named visiting gargoyle, had declared that the old paperweight on Sam’s desk that looked like a gargoyle, walked like a gargoyle, and was stone like a gargoyle, wasn’t actually a gargoyle at all, but other. “Where do you suggest I start? And why can’t you tell what it is, oh powerful familiar.” Sam couldn’t help the sarcasm. Smudge was capable of putting souls back in bodies and using heavy magic, but he couldn’t track down what kind of paranormal had been transformed into an ancient crumbling gargoyle paperweight? “I’ll forget you said that,” Smudge said condescendingly. “I’ve been busy.” “With what?” Sam asked. Privately he thought Smudge spent too much time cleaning himself with his paws up in the air and his tongue— “I can hear you,” Smudge warned. “And who else do you think can keep your attic spider infestation at bay?” Sam shuddered. He didn’t like small spiders at best, let alone the giant ones Smudge had suggested lived only a few floors up. “Good work,” Sam praised. “And as to our paperweight friend here—” Sam tapped the solid stone thing on the head with a stapler. “—I’ve put out a request to everyone I know as to who may be missing someone. I used the ParaGoogle to see if anyone knows anything. Not sure what else I can do at this stage.” Smudge gave a feline version of a huff, deliberately washed himself on the desk for a good five minutes, then disappeared out of the room. Sam shook off the fur that had fallen on his paperwork. This needed to be done and, unless he finished it soon, he’d have the authorities fining him all over the place. A knock on his office door jerked Sam from his sad contemplation of the bills he had to pay. Although he’d earned some money recently and he owned the building where he worked and lived, the flow of money going out far exceeded the money rushing into his pockets. Taxes were a bitch.
Review by: multitaskingmomma
My Rating: 4.5 of 5 Stars

The Case of the Purple Pear is the fifth installment to the mystery that is Sam. It is also the story of the little gargoyle book end that could, a.k.a. Halstein, and his lover/mate, Idris, Prince of the Fae on the run from his evil mother the wicked queen of the Fae. It is also the most frustrating of them all because it introduces a character so interesting and intriguing he kind of stole the show from the rest of the cast and crew.

A human case finally falls in Sam's lap but it soon turned out too good to be true because the case involved a paranormal who was the extra-curricular activity of said human's boyfriend. Sam has to deal with not only having to look for the recalcitrant fae revealed in a magical camera, he also learns he and Bob have to solve a mystery that would save all of their lives.

This is an action packed installment that was really quite exhausting in the reading because of its fast pace and revelations. The question of 'Who or What is Sam?" still remains and unfortunately, this time, it still remains unanawered. (Truly the reason why I am frustrated).

RJ Scott and Amber Kell created this series a bit of a while ago and now they have re-released the first four which recounts the story of how Sam became a vampire's mate and the fear of the paranormal world he absolutely hates.

Read the first four books, listed below, to get this fifth installment right. However, this is a stand-alone as the story is very strong, stronger in fact that the first four. It's just my frustration showing its evil side.

Recommended read for those who love straight on romance, mystery, thriller and the paranormal love life of men.

About RJ
RJ Scott has been writing since age six, when she was made to stay in at lunchtime for an infraction involving cookies. She was told to write a story and two sides of paper about a trapped princess later, a lover of writing was born.
As an avid reader herself, she can be found reading anything from thrillers to sci-fi to horror. However, her first real true love will always be the world of romance where she takes cowboys, bodyguards, firemen and billionaires (to name a few) and writes dramatic and romantic stories of love and passion between these men.
With over seventy titles to her name and counting, she is the author of the award winning book, The Christmas Throwaway. She is also known for the Texas series charting the lives of Riley and Jack, and the Sanctuary series following the work of the Sanctuary Foundation and the people it protects.
Her goal is to write stories with a heart of romance, a troubled road to reach happiness, and most importantly, that hint of a happily ever after.
rj@rjscott.co.uk
www.rjscott.co.uk/
https://twitter.com/Rjscott_author
www.facebook.com/author.rjscott
www.librarything.com/author/scottrj
www.tumblr.com/blog/rjscott  (some NSFW (not safe for work) photos)
www.pinterest.com/rjscottauthor/


About Amber Kell:
Amber Kell is one of those quiet people they always tell you to watch out for. She lives in Dallas with her husband, two sons, and one extremely stupid dog.