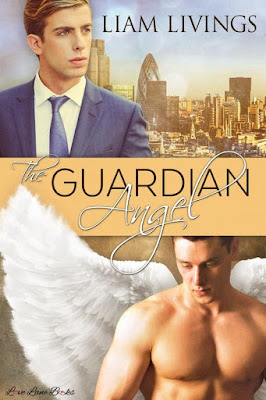 Win a $15 Giftcard from Amazon or ARe, plus 2 further prizes of an ebook from Liam’s catalogue. Competition closes 11th December – midnight GMT.

Buylinks here
What happens when a man falls in love with his guardian angel?

Richard Sullivan is plagued by white feathers turning up at the oddest moments. Amy, his best friend, suggests his guardian angel is trying to contact him, but he dismisses the idea out of hand as nonsense.Until, that is, he meets Sky. Six feet of muscle in a man skirt with white feather wings.What exactly is a guardian angel? And what happens when your guardian angel takes leave and sends in a temp to cover? Do you wait for a perfect boyfriend on the off chance you may be able to touch him, to be with him, or do you grab happiness with another human? And, why the hell has Richard’s life suddenly become so complicated?

Once I was feeling better, I managed to wash, dress, and make myself look presentable. Filling in graduate job application forms was still well beyond me, so I decided to go old-school: I took a copy of my CV, including all the temp jobs I’d done during and after uni, and handed it in to places near my flat, with a friendly letter Amy had helped me write—my laptop and Internet were still not fixed.
Before this, I hadn’t left my flat since coming out of hospital. Amy had organised food, and I’d just retired to my own little urban cave. Once, I ran out of milk for two days, and the thought of going to the corner shop—even though it was literally just around the corner—had terrified me so much that I drank black tea until Amy came round.
Black tea—it’s vile if you’ve never had it.
That’s how terrified I was.
Now, I left the front door of my block of flats and was on the busy pavement just outside Tufnell Park. Two stops north of Camden Town, and a million miles from Camden in so many other ways, this was the little corner of London I had called home for the last two years.
It had been convenient for uni, and now it was convenient because I knew it, because it was easy, because it was safe. It wasn’t fun, exciting, or particularly metropolitan compared to other parts of London, but it suited me. Amy didn’t live far either, which was a bonus.
Now, I felt like I’d been dropped into a crowd of people at Piccadilly Circus. People pushed past me as I stood on the pavement working out which way to walk. I looked left and right, then noticed a white feather blowing along the pavement to my right. I ran to catch it as it flew on the breeze.
Again, it was a perfect, unmarked, large white feather. I put it in my inside pocket, next to my heart.
Must be from the Chinese up the road. They eat ducks, don’t they?

About Liam Livings
Liam Livings lives where east London ends and becomes Essex. He shares his house with his boyfriend and cat. He enjoys baking, cooking, classic cars and socialising with friends. He escapes from real life with a guilty pleasure book, cries at a sad, funny and camp film – and he’s been known to watch an awful lot of Gilmore Girls in the name of writing ‘research’.
He has written since he was a teenager, started writing with the hope of publication in 2011. His writing focuses on friendships, British humour, romance with plenty of sparkle.
You can connect with Liam
Twitter @LiamLivings
Facebook https://www.facebook.com/liam.livings
Blog http://www.liamlivings.com/blog
Website www.liamlivings.com
Giveaway: