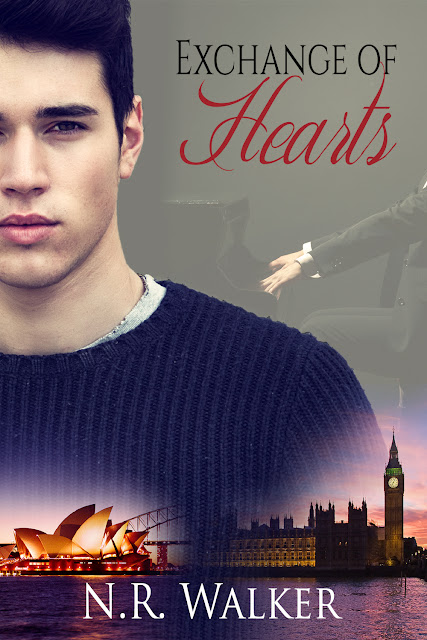 Eighteen-year-old Harrison Haddon has grown up alone. Surrounded by wealth, nannies, and material things, all he craves is the approval of his father. Sent away to the boarding school his father and grandfather attended, it’s assumed he will follow in their footsteps from Sydney’s prestigious Ivy League school straight into medical school.But Harrison doesn’t want to be a doctor.He dreams of music and classical piano. His only true happiness, his escape from the world expected of him, is dismissed by his intolerant and emotionally detached parents.Levi Aston arrives from London for a three-month student exchange program. Free-spirited and confident in who he is and what he wants to do with his life, Levi convinces Harrison not give up on his dreams.But convincing Harrison not to give up on his family might not be so easy.

Convincing someone to give up- on his family might not be easy, in the end it actually was, easy. It took a long time for the word 'easy' to be applicable, but yeah,  easier than than expected.

This book begins when Harrison and Levi meet for the first time as roommates. They are still both in high school and about to graduate. Levi is on an exchange student program and travels to Australia to basically have a half year of relaxation. He had taken his exams in advance so now he has the time to see the world and experience something new. What he finds instead, is a young man he falls for. Everything that unfolds is unexpected for both of them but it gives them both the realization they are in it for the long haul. Now, all they needed to do is get Harrison's family see that their dreams are not necessarily his. That he and his sister share a dream, albeit different ones, and see no future to what is expected of them.Their story ends when Harrison gets his impossible dreams realized. All thanks to Levi who made Harrison find the nerve to go against family wishes and expectations and follow his heart.

This is a story that is low in angst and drama but terrifically high on the romance. I love books like these. I can take the time out, go to a cafe, sip coffee or relaxing tea and just lose myself in the romance. It is books like these that make me crave an N.R. Walker because she always leaves me feeling good and grinning like an idiot.

Recommended for readers who love to smile and feel good during and after a read.

Note: eARC provided for by author in exchange of an honest review.

N.R. Walker is an Australian author, who loves her genre of gay romance.
She loves writing and spends far too much time doing it, but wouldn't have it any other way.
She is many things; a mother, a wife, a sister, a writer. She has pretty, pretty boys who live in her head, who don't let her sleep at night unless she gives them life with words.
She likes it when they do dirty, dirty things...but likes it even more when they fall in love.
She used to think having people in her head talking to her was weird, until one day she happened across other writers who told her it was normal.
She's been writing ever since...

Posted by multitaskingmomma at 12:38 AM