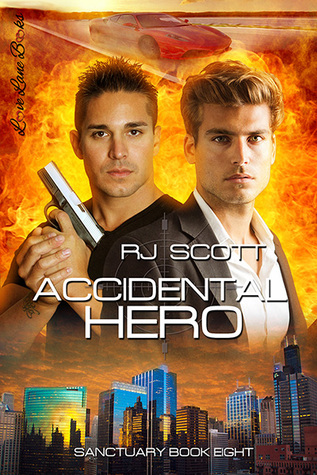 
Book 1 - Guarding Morgan
Book 2 - The Only Easy Day
Book 3 - Face Value
Book 4 - Still Waters
Book 5 - Full Circle
Book 6 - The Journal Of Sanctuary One
Book 7 - Worlds Collide
Excerpt
Simon was trapped in this tiny space, so close to whatever he’d been promised was a safe place to go. He didn’t move his hand from the words reflected in the glass. He’d been told there was safety here when all else failed, but Simon had fucked it up big time.
The guy outside the glass nodded as he spoke. He wasn’t calling the cops, although he clearly had an earbud and was talking to someone. Was it possible he was connected to the cops?
“Don’t call the cops,” Simon blurted. Although why he thought that would work he didn’t know.
Driver, or whoever the fuck he was, shook his head. “Not planning on it.”
“Or anyone else,” Simon added hurriedly. He didn’t know who was after him, or who had killed Jamie.
“We won’t.” He tapped his ear and sighed. “My name is Cain Brodie, Systems Manager for Sanctuary.”
Simon didn’t focus on the Sanctuary part, he had to make it clear that no one could know where he was, until he got his head around what had happened. “I mean it. Please don’t tell anyone yet.”
Cain nodded from his crouched position. “Not our protocol to involve the authorities without checking everything out. Did you hear what I said, Cain, Sanctuary.”
Simon glanced past Cain, at the white doors, the plain walls, at the word in the glass, then at Cain himself. “Okay, I need help,” he said.
“That’s what we do,” Cain said evenly. “Do you have your cell phone?”
Simon shook his head. “No, I already threw that.”
“Smart move. There’s a BOLO out on you. Suspected murder. Apparently you’re armed and dangerous.”
Simon let out a noisy huff. That underlined exactly how he had expected this to go. Varga said that he only needed to kill one of them. The implication was the other could be framed, maybe? Or so fucking scared that they ran. So, did that mean Varga was behind this? Or was it internal? He’d been taking so much heat lately from people he’d called friends. Colleagues who had turned their backs on him.
“I expected the BOLO. It’s why I ran.” Simon was tired of this complete lack of control.
“Who’d you kill?” Cain asked.
His tone was devoid of accusation, but equally he didn’t add in the “allegedly” that Simon wanted to hear in that sentence. Seemed that Cain was very much of the opinion that Simon was guilty. He thought Sanctuary were supposed to help, not judge before knowing all the facts.
Good start.
“I didn’t kill anyone.”
“Yet you’re covered in blood.” Cain pointed to Simon’s uniform pants. “Is it your blood? Are you hurt?”
Simon glanced down at his pants, darkened in places. “No. It isn’t my blood.” Then he realized he had damned himself with his own words.
“Whose blood is it?”
Simon shook his head. The words weren’t there. He was lost, spinning away from reality at a very fast rate.
“Simon,” Cain pressed. “Who died?”
The question phrased that way was a lot less demanding. “My partner, Jamie.”
Cain stood and brushed the imaginary dust from his pants, smoothing them. “Jamie Harrington, twenty-five, single, cop, found dead in his apartment this morning.”
Simon nodded mutely. The facts laid out like that were stark and painful.
“The suspect in the shooting fled the scene. A Simon Grant, cop, twenty-six, dark hair, five ten. You.”
A door opened behind Cain and a blond man built like a brick shithouse stepped into the corridor, a gun in each hand. “Cain?”
Cain turned to face the man and let out a noisy sigh. “They didn’t need to call you in, Nik. I had the situation under control.” Was it just Simon or did Cain sound like he was angry at Nik’s presence?
Nik held up a hand to placate Cain. “I was in the area for the next thirty. Anyway, you know the procedure and they said he was armed.”
“He was.” Cain waved a hand at the glass. “But he’s neutralized. I neutralized him.”

I never thought I would enjoy this story as much as I did. Especially the ending. That was a WOW!

The opening salvo was frightening, to both this reader and Simon. I won't tell you why or what happened, but I can tell you that it read confusing as Simon was confused. It read confusing for Simon nor the reader knows what is going on. The fight or flight instinct kicks in. Where does he go? What does he do? How was he going to get out? Will he survive?

The exhausting first chapter sets the pace for Accidental Hero then it slows down a bit, getting the reader into the basics of how Simon came to that point. Then just as quickly, another set of stressful events happen and it takes Simon by surprise. Again. He is in a poor situation but he is fighting to hang on.

Cain is an admin for Sanctuary so is dismissed by many as someone who is not the type to be able to subdue a felon. Well, he surprises Simon and the rest of the team for not only does he prove his worth, he proves he can fight when he needs to.

And drive a bad ass car he lovingly caresses and talks to...

...and pet a computer lovingly and speak to it like a lover should...

So Simon and Cain try to make heads and tails of a killer on the loose. Simon finds himself making a choice and he faces the bullet when he does. Cain will fight to get his lover to safety, even if it means giving up his Ferrari for a BMW. (Frankly, I am with him :D)

About RJ
RJ Scott has been writing since age six, when she was made to stay in at lunchtime for an infraction involving cookies. She was told to write a story and two sides of paper about a trapped princess later, a lover of writing was born.

As an avid reader herself, she can be found reading anything from thrillers to sci-fi to horror. However, her first real true love will always be the world of romance where she takes cowboys, bodyguards, firemen and billionaires (to name a few) and writes dramatic and romantic stories of love and passion between these men.
With over seventy titles to her name and counting, she is the author of the award winning book, The Christmas Throwaway. She is also known for the Texas series charting the lives of Riley and Jack, and the Sanctuary series following the work of the Sanctuary Foundation and the people it protects.
Her goal is to write stories with a heart of romance, a troubled road to reach happiness, and most importantly, that hint of a happily ever after.
rj@rjscott.co.uk
www.rjscott.co.uk/
https://twitter.com/Rjscott_author
www.facebook.com/author.rjscott
www.librarything.com/author/scottrj
www.tumblr.com/blog/rjscott  (some NSFW (not safe for work) photos)
www.pinterest.com/rjscottauthor/

Giveaway
Win a $15 Giftcard from Amazon or ARe, plus 2 further prizes of an ebook from RJ’s catalogue. Competition closes 4th December – midnight GMT.
a Rafflecopter giveaway

Posted by multitaskingmomma at 5:44 AM