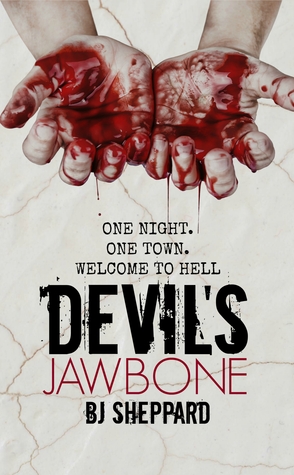 As night descends on the town of Devil's Jawbone, no one is safe. The veil between the living and the dead is at its thinnest, and the darkest side of human nature is boiling to the surface. The supernatural and the natural are colliding, and in this sleepy town, the bump in the night is taking human form. Innocence will be lost; the villain will become the victor; spirits will rise and Satan himself will come to town.
In an eerie collection of short speculative fiction, author BJ Sheppard will grab your imagination, bringing new life to the classic campfire tales synonymous with the scariest of occasions. Halloween will never be the same again.

There is something about an anthology of horror stories—campfire-type-of-stories—that makes it impossible for me to get back to the real world. Some of the stories make no sense but make perfect sense, and some make perfect sense but make no sense at all. It boggles the logical mind. What makes this the perfect read is—it makes the reader react. Some nicely like, 'holy cow!' or 's**t' and then there's the, 'wtfh????' followed by the, 'holycraps!'

There are eleven tales of horror and extreme here. Some are shorter than others. Some are longer. I cannot review each one for fear of spoiling the details. This is too good to spoil. One thing is certain: they all make the goosebumpbs bump and the mind shut down in terror.

Devil's Jawbone is now on my list of favorite horror books. Read if you dare.

Janine Richards had been the first to see the body, arriving an hour early to train for that Friday’s track meet. Through the indigo rays of morning, she had expected peace and quiet but instead had been gifted with the body of the football team’s quarterback hanging from the centre bar of the goal post. The police had arrived after her frantic call and all the yellow tape in the world couldn’t stop the student body from stopping to share in the horror, the grief that had blanketed DJ High.

Riley fought his way through the crowd and stopped only when Logan’s body, still hanging one hour after its discovery, swung lazily on a gentle autumn breeze. His stomach lurched and his eyes prickled, yet he couldn’t peel them away.

What, only one day previously, had been a generally happy, albeit momentarily pissed, Logan Greenway was now reduced to a bloating blue-black sac of meat swaying from the goal that Riley himself had scored over several times at practice the night before. The soccer net around his neck had bitten bloodily into his neck, which was pitched at an awkward angle and coated with what looked like thick black paint under the gentle rays of morning sun. Riley fought the urge to run, closed his throat against the violent clench in his stomach that had only occurred before when he was sick, and turned from the body that was once his teammate.

Logan had not been suicidal, that much was the truth. He had been distracted, pissed at Coach for his harsh behavior, but Logan Greenway had been the boy who had it all. Nothing about his life had held a suggestion that things weren’t going exactly the way he wanted.

Riley thought to his own home life, to the secret of his father’s sudden departure that lingered on the tip of his tongue ready to be spilled. Everyone has a secret, he thought, playing nervously with the straps of his rucksack. But what was Logan’s?

It didn’t matter anymore. Logan Greenway was dead. And school was out for the day.

I'm new to this game, so bear with me while I struggle my way blindly through, with only the help of half a road map and a crystal ball that's more paper-weight than portent. This series of short stories is a nice respite from the Shakespearean melodramas I usually produce, and I hope they give you half the laughs they gave me when I wrote them. More of the series will be available soon, so drop by and check them out when they find their way our of my brain and onto a page.