Review: It was a Thursday by Carol Lynne 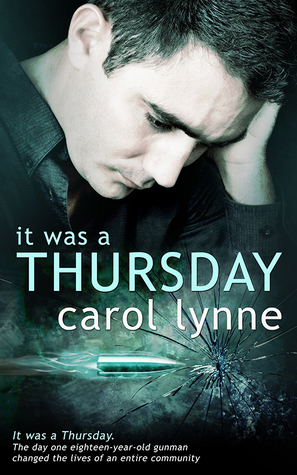 It was a Thursday. The day one eighteen-year-old gunman would change the lives of an entire town.
Principal Mark Kurtz loved his school. He worked hard to give his students every advantage in life, but he could have never predicted that on a warm day in May, a distraught senior would commit an unimaginable act of vengeance on his classmates.
In the aftermath of the shooting that left both students and faculty members dead, Mark must deal with his own guilt while trying to help those around him feel safe once again.
Mark’s problems are compounded when an old flame, Lane Warner, arrives in town to help treat the trauma victims. How can he possibly deal with his own guilt, be there for his seventeen-year-old son and confront the part of himself he’s always denied while trying to heal a broken community?


It is a reality for our generation to wake up to the news that another mass killing in schools has happened and more innocents are killed. There is the inevitable public and media outcry, the POTUS makes a statement, the NRA does all its billions to make sure nothing is done to correct an epidemic. In Carol Lynne's latest, It Was A Thursday that it happened and now the survivors are left to wonder how they can erase from their memory the events that took place and move on. It was a Thursday that Principal Mark Kurtz watched one of his best students become a statistic on the USA killer list. How can he move on?

Lane Warner has been hired to do the unimaginable: make sense out of a senseless act. Lane is a specialist in a field that should never have to be real in this day and age. He does all he can and must, to get the survivors make sense out of life. He is also Mark's estranged best friend, ex-lover, and now his savior.

It Was A Thursday is a read I risked for the author, well at least for me, writes romances that are fairy-tale-like. This sounded different from her other works so I took the chance on her, again. And it was a risk well taken.

Carol Lynne has created a story that is both agonizing to read and yet is a must. Yes, it is a romance but that comes second. At the fore is the need to survive life and be a survivor. There is no attempt to justify the heinous act, but she does give us a reason behind it. As readers, we are left to evaluate our feelings on the matter. In my case, I thought it was senseless but after knowing the boy behind the crime, I reached a conclusion I have to live with. Was it necessary, the reasoning behind all the violence? Could it be stopped? How?

The questions are left unanswered and in real life, they are never answered.

A different Carol Lynne I could not regret. Even if this is out during the holiday season, it is a much recommended read. The least it can do is make you think of your life's priorities and maybe do something about it.