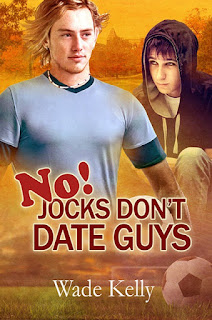 
What is a sexy soccer stud supposed to do when “following family tradition” falls 180 degrees opposite his closeted ideal?

From birth, Chris Jackson has been schooled on how to land a cheerleader. After all, his father married one, and his father’s father before him. Heck, even his older brother married a stereotypical cheerleader the summer before Chris went off to college. For two years, Chris dodges invasive questions about relationships by blaming his lack of female companionship on grueling practices and heavy course loads. But his lack of interest in girls should’ve given his family a clue. It isn’t until Chris mentions meeting a boy that his father’s synapses short-circuit.

Alonzo Martin is anything but a buxom blond. From his black hair, combat boots, and trench coat to his nail polish and guyliner, the mysterious introvert isn’t easily persuaded to date. Alonzo’s insecurities keep Chris at arm’s length, but Alonzo’s painful past might meet its match in the charismatic jock’s winning smile and sense of humor.

When opposites attract, only cheerleaders and gummy bears can help overcome fear and family tradition.
Review by: multitaskingmomma

No! Jocks Don't Date Guys is the second of the Jock books which surprisingly became a series. The first hint was the book Oh, Crap! This Jock's Getting Married (Jock #1.5) offered to attendees to GRL and released to the public right after. There we see the futures of our beloved characters, Cole and Ellis. They have graduated and life is not giving them the break they need financially. At the end of that story, we caught a glimpse of this second installment.

This book opens where 1.5 closed, of a jock, Chris, who catches a glimpse of a hooded figure watching his team practice. Ellis comes in as the coach and strikes up a friendship with Chris who learns to trust his coach and depend on him as a friend.

Alonzo's history is not to be spilled, you  have to read it to know why he is acting the way he is, dressed the way he is, and most of all, looks with longing at the field and ball. Oh yes, the player Chris is eye candy so he enhances the experience. When Chris strikes a friendship with him, via gummy bears of all things, he discovers that Chris is not as 'jocky' as he acts (note: did I mispell that?). Not only does Chris prove to be persistent, he also speaks the dictionary.

As the two young men get to know each other, they also learn their faults and weaknesses. Surprisingly, both stick it out, through thick and thin, and become more than boyfriends. They become best friends.

Then there are the strangeness of the characters who are weird in a really weird way, like Chris' father who has this thing for cheerleaders. It's a confusing obsession but recalling that I know of even weirder ones, he comes out tame. But weird. He's funny, illogical and lovable at the same time.

I love Ms Wade's style of presenting this read. There is a shift in POV which made it easier for this reader to 'read' into the mind of each young man and discover the whys of their behavior and actions. There is also a peek into the minds of some of the side characters who play important roles for Chris and Alonzo's relationship. The shifting is surprisingly free of confusion and just made it a more interesting read.