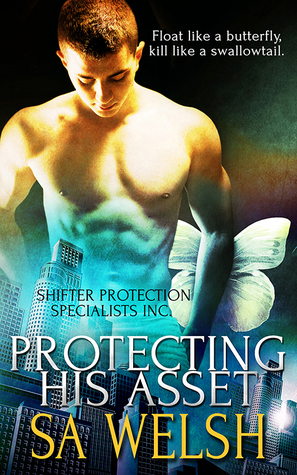 
Float like a butterfly. Kill like a swallowtail.
Scott knows his boring day is over the second a bloody and scared George Kelvin crashes into his office, claiming people are trying to kill him. He knows he should pass the case over to one of his brothers, but he can’t seem to do it. The strength and resilience of the man mixed with a quirky sense of humor fascinate him. He may be a human in the company of powerful shifters, but he’s just as deadly and well trained as the rest of his brothers.
With devious CIA agents, foreign forces gunning for what George possesses and George’s power-hungry father, who is also Deputy Director of the FBI, Scott begins to wonder if he’s bitten off more than he can chew.
George always knew his father was dangerous and cruel. However, he never thought that those titles would inadequately sum up the lengths his father is willing to go to, to get what he wants. The only chance he has is using whatever is on file against his father. Staying alive to do that is another challenge. When he runs into the Shifter Protection Specialists, Inc. office, he’s desperate, but isn’t convinced anyone can protect him from his father. Risking more than he’d thought possible, he discovers that maybe he is more than he’s always been taught to believe.
One thing is for certain—his father is not going to give up easily.

I love shape-shifter stories and I must say, this is the first I ever encountered one involving this type before. I had to go and research on it, just to confirm what was written here, in the hopes I would understand the chemical reactions to the **spoil** (I won't spoil). All I could say, after reading about it for real, it was WOW! such things actually exist!

So we have a shifter story and it is not brilliant but it is definitely one of the well-written ones. I finished this in under two hours, and that was between cooking and laundry. This was fast paced and it opened a whole lot of questions but they only served to make me crave for more.