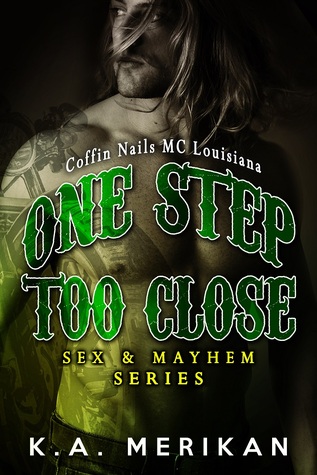 --- One love. One motorcycle club. Two stepbrothers. ---
Ryder. Controlling. Ambitious. Protective.Jed. Self-destructive. Trapped. Lonely.Their love? Forbidden. Taboo. All-consuming.
For Jed, the Coffin Nails Motorcycle Club is family. With them, he learned how to think, what to enjoy, and how to fight, but there is one thing he knows his friends can’t find out about. They would never accept him as gay, and so his life is a constant struggle with desires that fill him with despair. Only there is a much darker secret lurking in Jed’s heart. His feelings for his stepbrother, Ryder, go far beyond brotherly. Trapped with a yearning that can never be fulfilled, Jed spirals out of control and unwillingly puts the love of his life in danger.
Ryder is climbing up the ranks. Recently promoted to sergeant-at-arms, he has it all: drive, respect, and the love of his biker family. When his stepbrother gets into trouble with the law, Ryder decides to take the blame and save him from a long sentence. Deep inside, he knows there is nothing he wouldn’t do for Jed, but through a desperate attempt to suppress his own hidden desires, he might irreversibly break the man he secretly loves.
But finding out what they feel for each other will test their loyalty to the Coffin Nails MC and change their lives forever.

One Step Too Close is a bit different from the other Coffin Nails books. One, this is a love affair between stepbrothers who looked to each other as real brothers so it does skate the edge of taboo. Two, this does not end the way one would expect a CN book to end. That part, I cannot spoil, you have to read it for yourself.

Ryder took it upon himself to be the guardian of all: his father, his MC, his MC brothers, and his stepbrother, Jed. When he saw Jed on the edge of destruction, he stepped up and claimed responsibility ending up in jail and losing his girlfriend. Did he hate Jed because of all that was happening? No. Why?

This is a taboo/untaboo love between two men who are the farthest from the generalized view of gay men. They are lovers and they love each other. They will sacrifice everything to guarantee they stay together. They love.

If you're a fan of the MC Coffin Nails, here is one installment you should never, ever, miss out on.

Posted by multitaskingmomma at 2:01 AM