Review Request: The Proof is in the Pudding by Nic Starr 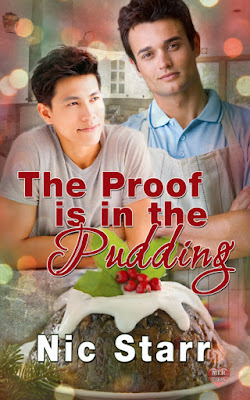 
Steve Hayes is away with a group of friends who are spending the Christmas break together. He’s determined to put his two-timing ex-boyfriend in the past, and enjoy his week away. Steve is happily surprised to find that Corey Oh, the guy he’s been admiring from afar, has been invited along too. But Steve knows there’s no way someone as wonderful as Corey, who could have any man he wanted, would be interested in him.
However, thanks to a misadventure with a Christmas pudding, Steve will find that dreams can come true.

'Tis the season to be merry and puddings, fruit cakes, gingerbread cookies and eggnogs are in the list of Must Have things. In Nic Starr's Christmas story, we have front and center: the pudding.

The pudding is one of the most exhaustive dratted things I had the misfortune of thinking I could actually accomplish without hurting myself. One, the sheer amount of fruit preserves and whatnots that have to get in there did wonders for my wrists and shoulders (Note: I could not move for two frikkin days!). Then there is the act of mixing the thing together. Of course, there is also the muslin that needs to wrap it up and the carefully, carefully duck out of the way pot filled with boiling water. It has to be at the right temperature before loading the thing in. Taking it out, will take a whole new segment to write about. That I managed to escape unscathed was a miracle by itself.

Unfortunately, Steve was not as lucky as I when it came to the pudding. His heart, though, heheheheeeeee, tingles down the spine, he gets his Christmas wish of a man in Corey and more.

I love these little short Christmas stories coming out these days. This is the first of what I consider as the bake-a-Christmas-cake books that landed in my tablet. (Note: I got rid of the dratted Kindle) This is a story that makes the cook in you sit at the edge of your seat. Is Steve doing the right process, is he going to drop it? As a romance, this is breezy but as an adventure in the kitchen and within the heart, oh yes, it's a Nic Starr all right!

Posted by multitaskingmomma at 1:34 AM