Review: Rhodri's Rangers: Searching For Us by Etienne 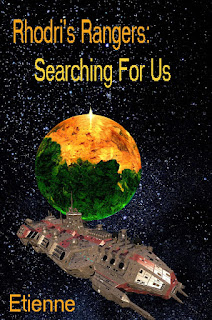 Rhodri’s Rangers are the best military force in the universe. They are escorting a group of scientists to an archaeological site on a remote planet. The seemingly simple task turns out to be anything but that, when they encounter a previously unknown enemy.
Along the way to the planet, fresh recruits familiarize themselves with life in the Rangers. Seasoned officers form new partnerships while others renew old ties. And there may be some on the mission with agendas all their own. In the end, Rhodri’s Ranger will stand true to their motto—"We take care of our own."

Etienne does science fiction. Well, he's done it before, just take a look at his Forever series and we know he has the talent of creating a universe within our own.

Rhodri's Rangers: Searching For Us is very different from the Forever books in that this takes place thousands of years into the future and settings are on different planets occupied by  its indigenous lifeforms.

Rhodri's Rangers are a group of men who, through hundreds of years, proven to be the elite of the elite in terms of technology, warfare and intellecta. They are not only highly skilled military men who can fend for themselves and those they guard with expertise, they can parry intellectually with scientists who wouldn't know one end of a gun from a bat. They have one motto: We Take Care Of Our Own. That motto is what has driven these rangers through the centuries and what they will fight for to the death. What it means is something I won't spoil.

On this journey, the rangers are escorting a group of scientists who are looking into a planet where an alien artifact has been located. They go down on the theory the planet is uninhabited and no red flags have been raised. What they meet down there is the story that drives the rangers through their dangerous journey into the unknown.

Front and center  is Major Joryan Harrod and his lover, Cynlas. Joryan, and other characters, join Colonel Rhodri Prowell on the Scorpio for the trip to Q12-4, an obscure planet where the original humans once settled. Original humans that were the forefathers of the Earth humans. The planet is deemed safe but for the four legged creatures that can turn hostile. The scientists are there to investigate if there is any evidence these fore-humans left that may provide answers to the question: Where do we come from?

Etienne weaves a fascinating tale of the possibilities of the origin of mankind. The rangers and scientists discover answers long held as myth and uncover more questions along the way. The drama within and without the Scorpio diverges on many paths but all create a bigger picture to what could have been a very simple plot. Each character introduced becomes a familiar one and there are quite a few of them. The beauty of this read is that it is far from confusing for they hold points of views essential to the overwhelming discoveries uncovered. And the discoveries are huge prices for both Rangers and scientists. They find artifacts and specimen long thought to be non-existent or extinct. Discoveries that test the resolve of each character and the rest of the team.

This is a saga, pure and simple, not an ordinary tale told in one read and left forgotten. Questions I thought of long ago resurface and this book gives its version of answers—science fiction style.

As for the element of romance? This is full to overflowing in romance, although Etienne would be the first to disagree. The trip to Q12-4 was supposed to be a life-changing event because of its scientific nature, but Joryan instead finds the love of his life back in his arms. How?Again, that is for you to discover.

Searching For Us is a military themed, action-packed, science fiction fantasy with the element of romance to balance it out. This is a different Etienne we are reading here and it is a fascinating world he has created.

Posted by multitaskingmomma at 1:33 AM