Review: Snowed In by Teodora Kostova 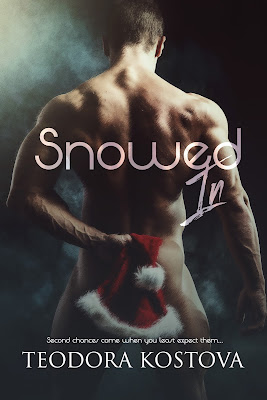 Be careful what you wish for...
Nate has been in love with Quinn, his brother’s best friend, for as long as he can remember. But when he finally gets the chance to show Quinn how he feels, his heart gets broken in the most unexpected way.
Second chances come when you least expect them...
Quinn doesn’t believe in miracles, especially not Christmas ones. When he decides to win Nate back he knows it won’t be easy. The last thing he expects is a health scare, a road trip and a vicious snow storm to work in his favor. In the end, a cabin in the woods turns out to be not only the shelter they desperately need, but also Quinn's very own Christmas miracle.
Sometimes, to forgive, you need to get snowed in...

A second chance at love. This is what Snowed In is all about. When two men who were meant to be together painfully part causing a misunderstanding that almost ruins their lives, getting snowed in at Christmas may just be the best thing to happen.

This is a Teodora Kostova and you all know I love her style of writing. It is angsty without being over-dramatic, and the plot twists and turns to reveal such a glorious romantic story of love between two men who should never have parted but for circumstance.

Read this is one hour flat. It's that good!

Before I go, let me just give a shout out to the awesome cover by none other than the beautiful Jay Aheer. Dang, that cover just rocks!

Hi, my name is Teodora and I live in London with my husband and my son. I've been writing ever since I can remember, but it became my full time job a few years ago when I decided that everything else I've tried bores me to death and I have to do what I've always wanted to do, but never had the guts to fully embrace. I've been a journalist, an editor, a personal assistant and an interior designer among other things, but as soon as the novelty of the new, exciting job wears off, I always go back to writing. Being twitchy, impatient, loud and hasty are not qualities that help a writer, because I have to sit alone, preferably still, and write for most of the day, but I absolutely love it. It's the only time that I'm truly at peace and the only thing I can do for more than ten minutes at a time - my son has a bigger attention span than me.When I'm procrastinating, I like to go to the gym, cook Italian meals (and eat them), read, listen to rock music, watch indie movies and True Blood re-runs. Or, in the worst case scenario, get beaten at every Nintendo Wii game by a kid.
Don't be shy and get in touch - I love connecting with my readers.
Blog: www.teodorakostova.blogspot.com
Twitter: @Teodora_KostovaFacebook: https://www.facebook.com/teodorakostovaauthor
E-mail: t.t.kostova@gmail.com
Instagram: teodorika1