I’d like to thank Multitaskingmommas for hosting my blog tour visit. Yesterday, which releases today from Dreamspinner, is a period piece, a stand-alone novel, set during the tumultuous last days of the Pahlavi dynasty. The time and place aren’t conducive to romance, especially between two men, but love and logic aren’t always compatible as Kamran and Grady soon find out. Can a chance meeting alter one’s destiny? The answers are revealed within the pages of Yesterday.
The striking cover was designed by multitalented author and cover artist Catt Ford. Aside from the giveaways, which are listed on the Rafflecopter widget, I bring an exclusive excerpt. I hope you enjoy the sneak peek. 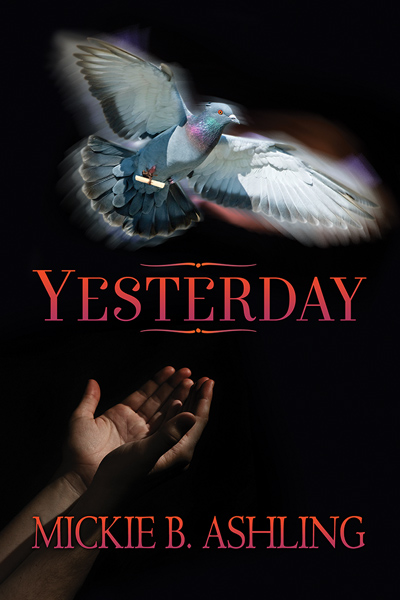 
In June of 1978 Grady Ormond, eighteen-year-old son of diplomat Peter Ormond, accompanies his father to his new posting as US Ambassador to Pakistan. Neighboring Iran is on the brink of a civil war, with the monarchy in danger of being overthrown.
Grady will be leaving for New York City in late August to study cinematography and has been warned to keep his homosexual orientation tightly under wraps while on vacation. Repercussions in the predominantly Islamic region could be severe.

On their first night in Karachi, his father hosts a cocktail party to meet the local dignitaries. Grady is introduced to His Highness Prince Kamran Izadi, nephew of the Shah of Iran. Twenty-three-year-old Kamran has recently returned from the UK, where he spent eleven years, first as a student, and then as a financial analyst.

The attraction is immediate—unforeseen and dangerously powerful—but neither one dares to make a move. Odds are so stacked against them it's futile to even entertain a friendship, but they do, and their world tilts precariously.
With his country in turmoil and Grady about to leave for college, Kamran makes a decision that will change their lives forever.

I realized the car had stopped, and his bodyguards were already holding both doors open for us to exit the vehicle. It was late morning, and the sweltering heat was suffocating after the air-conditioned comfort of the Land Rover. Immediately, beads of sweat formed on my forehead, and moisture leached from my back and armpits uncomfortably.

“My God, this is worse than a sauna,” I commented.

“And it’s only June,” he said wryly. “July will be even more unpleasant.”

“Doesn’t it ever rain around here?”

“Oh yes. Monsoons are a regular occurrence during the summer months.”

“I bet it’s a welcome relief.”

“If you’re not caught in a flood.”

I shook my head in disbelief. “What a harsh environment.”

“Come on,” he said. “It’s cooler inside the bazaar, and a change of clothing will make a big difference. Sandals are more suitable for this kind of heat.”

“Yes, please. My poor feet are burning up.”

He was right. The difference in temperature within the solid walls of the bazaar was quite noticeable, and after removing my socks and slipping my bare feet into a pair of hand-tooled leather sandals, the relief was complete.

He wasn’t lying when he described the place. It was filled with a wide variety of wares, from baskets overflowing with fruit to tubs and tubs of dried spices. Women crowded around the stalls, pointing out this or that, waiting patiently while the vendor measured out cumin, turmeric, mustard seed, cinnamon, nutmeg, coriander, pepper, cloves, cardamom, bay leaves, mint, ginger, and saffron into paper cones. These necessary spices would be lovingly hand ground at home in a stone mortar and measured to taste, shortly before the cooking commenced.

“Why not do this the easy way and buy curry powder in a bottle?” I asked.

Kamran tut-tutted like an old lady. “No one in this part of the world would think of buying spices in a bottle. Each of these ladies have their own special formula, which can only be achieved by grinding everything up from scratch.”

“Well worth the effort when they see contented faces at the table.”

I dropped the subject and continued my inspection. Bolts of colorful fabric lined the shelves, and when a customer pointed one out, they were brought down and spread on tables to be admired, handled, and haggled over. Eventually they would be turned into beautiful saris, pleated and draped artistically, a visual delight that made me reach for my camera.

“Is it all right if I film this?” I asked the group in front of me, hoping someone understood English.

Kamran stepped forward and said something to the store owner in Farsi. Money changed hands, and I was given the signal to proceed with filming. The shalwar kameez I’d admired on Kamran swayed on hangers above the crowd, and I pointed to one such outfit, asking the vendor if I could try it on for size.

“There are no dressing rooms here,” Kamran informed me. He pulled down one of the long tunics and held it against my chest. “This looks like a good fit.”

Mickie B. Ashling is the pseudonym of a multifaceted woman who is a product of her upbringing in multiple cultures, having lived in Japan, the Philippines, Spain, and the Middle East. Fluent in three languages, she’s a citizen of the world and an interesting mixture of East and West. A little bit of this and a lot of that have brought a unique touch to her literary voice she could never learn from textbooks.

By the time Mickie discovered her talent for writing, real life got in the way, and the business of raising four sons took priority. With the advent of e-publishing—and the inevitable emptying nest—dreams of becoming a published writer were resurrected and she’s never looked back.

She stumbled into the world of men who love men in 2002 and continues to draw inspiration from their ongoing struggle to find equality and happiness in this oftentimes skewed and intolerant world. Her award-winning novels have been called "gut wrenching, daring, and thought provoking." She admits to being an angst queen and making her men work damn hard for their happy endings.

Mickie currently resides in a suburb outside Chicago.

Jan. 26 - On Top Down Under Book Reviews